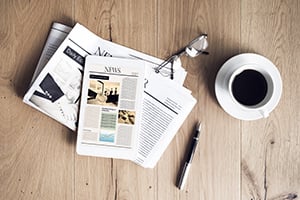 Three hot topics at once. Talk about efficiency! Beyond efficiency, though, I do think there is a fairly deep connection here—and one that is worth talking about right now.

But it’s not that complicated. There is a fairly small universe of words available, and successfully identifying a couple of letters can narrow the choices by as much as 95 percent. You can also choose certain words to start that contain a reasonable sample of letters. My wife uses ADIEU to get most of the vowels, and I start with NOTES, based on the most common letters in the English language. Once you get a good start, then it is over to judgment, but that start narrows the universe of possibilities sharply.

Can We Simplify the Investing Game?

Which brings us to investing. One of the hardest things to do when we invest is to get that good conceptual start. There are so many things that could determine stock prices that we might want to think about. But here, too, there are ways to simplify that process, to get a couple of anchor points as a start. Once you do that, the remainder of the game is much simpler.

In the case of investing, especially in the stock market, those anchor points are earnings and valuations. I have written about this recently, when we considered whether the stock market was crashing or not. I pointed out that for all the reasons to worry, those two anchor points gave us all the framework we needed to solve the rest of the puzzle.

In Wordle, once I get a good start, I don’t know the next word—but I do know what words cannot be there. With the market, once we consider earnings and valuations, we don’t know (or at least I don’t) what will happen next, but we do have a much better idea of the likely outcomes over time. If there is no E in the word, that narrows the potential outcomes. Similarly, if both earnings and valuations are going up, then the market will go up. If both are going down, then the market will go down. If we don’t know, then we take our next guess to narrow the results down further.

What About Russia and Ukraine?

Which brings us to Russia and Ukraine. We don’t know what will happen, but in the spirit of Wordle, let’s take a look at our anchor points. If Russia invades, what does that mean for corporate earnings? Probably not much at all. Ukraine is a relatively small market for both exports and imports from the U.S., and the direct damage would be small. For one anchor (earnings), no impact.

Valuations, on the other hand, could get hit hard—which leads us to our next guess. If there is no E, I am going to look for an A. So, if valuations are the issue, we need to look at interest rates. What will interest rates do if Russia invades? What often happens is a flight to safe assets as investors want to make sure their money is safe—and buy U.S. assets. Rates down. And if the invasion does damage growth, the Fed is less likely to raise rates—once again, rates down. And if rates do go down, valuations typically go up. This anchor point should provide support to valuations and, thus, the market. Our anchor for valuations suggests there is more cushion to the effects of a Russian invasion than meets the eye.

That’s over the medium term, of course. Over the short term—who knows? Just as we don’t know exactly what the next word will be, we don’t know what the market will do in the short term. But we can outline the limits of what will happen and get to the right answer by step six. For Wordle, the answer is the word of the day. For investing, though, the answer is the continued growth of your assets over time. Before taking a guess, it is worth taking some time to think through what the answer can—and can’t—be.

So, What’s the Connection?

And that is the connection. For both Wordle and investing, find the anchor points. Figure out what the answer is likely to be. And then take your next best guess when you know more. It works in Wordle and it will work with the markets, even in difficult times like now. It is really the same problem.