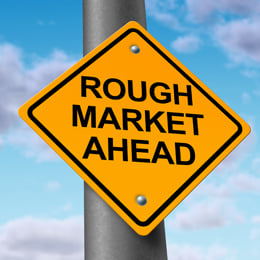 August was the worst month for U.S. markets in more than three years, so say the headlines. I suspect it was also the worst month in at least that long for many international markets as well. And, as today’s numbers show us, we aren’t done yet. As I write this, U.S. markets are down about 2.5 percent, and European markets closed down around 3 percent.

There is actually not much more I can add to what I’ve already written. Current valuations remain relatively high, and there is certainly the potential for further declines if the market adjusts to more typical valuation levels. From a correction standpoint, the S&P 500 is still down less than 10 percent from the peak. In other words, for all the hype and worry, we are in a market decline that, by historical standards, is both small and normal.

This is not to minimize the current situation, however. Substantial technical damage has been done to U.S. markets, which remain below both the 200-day and 400-day moving averages. This suggests to me that more weakness is very likely. Indeed, the odds of a more substantial decline are, in my opinion, rising as confidence continues to erode. Many decision rules that have tested well in the past are now pointing to more declines as well.

With further market declines likely, what should you do?

If you have longer-term money invested (i.e., you don’t need it for 10 years or more), try to stay put. And if you’re still contributing to your portfolio, remember that the decline actually represents an opportunity, since you can invest at lower prices and benefit from potential future growth.

If you have shorter-term money invested (i.e., you need it in the next couple of years), or if you’re already drawing down your portfolio in retirement, work with your financial advisor to determine what effect a large decline would have on your financial well-being. Hopefully, your portfolio is structured in a way that any decline will have minimal impact over time. If not, you might want to consider making changes to ensure that is the case. Once your portfolio design meets your needs, though, unfortunately there is little left to do but buckle up and endure the ride.

Why this decline looks different

I won’t say enjoy the ride, of course, but to make it less painful, consider that this decline is different:

This prescription—prepare and keep the long run in mind—is neither easy nor satisfying. The only real thing it has going for it is that, over time, it generally works. That is what I try to focus on, and I suggest you do the same.