Will the Election Sink the Markets? 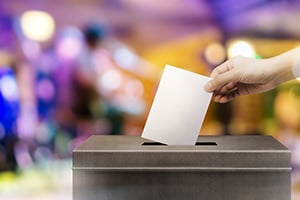 Recently, I have been getting a number of questions from people who are scared about what might happen to the financial markets at election time. The fear is that if we get a disputed election, it could lead to disruption and possibly even violence. If so, we could well see markets take a significant hit.

It’s a real fear—and one that, in many respects, I share. In 2000, the hanging chad debacle in Florida hit markets, and this election could well be even more disputed than that one. Markets also share the fear, in that expectations of volatility have spiked in November as measured in the options markets. From a political standpoint, unless there is a blowout win by one side or the other, we are almost certain to get litigation and an unresolved election, like in 2000. A substantial market reaction would be quite possible.

Which raises the following question: what, if anything, should we do about it? I think there are two answers here. For traders, people who actively follow the market, this might be a chance to try to make money off that volatility. This approach is risky—many try and not all succeed. But if you are a trader and want to try your luck, this might be a good opportunity.

For investors who have a longer, goal-focused horizon, my question is this: why should you care? One reader mentioned an 8 percent decline in 2000 over the election. Well, we just saw a decline of just about that magnitude in the past couple of weeks. We saw a decline about four times as large earlier this year with the pandemic. And, at some point in almost every year, we see a larger decline than that. So, we get a decline in November. So what? We see declines all the time. Over time, they don’t matter.

Will We See Longer-Term Declines?

The real question here, for investors, is if we do see a decline, whether it will be short-lived or long-lived. Short-lived, we shouldn’t care. Long-lived? Maybe we should. But will we get a longer-term decline?

We might. Looking at history, however, we probably won’t. Every single time the market has dropped in a meaningful way, it has bounced back. The reason for this is that the market depends on the growth of the U.S. economy. Over time, markets will respond to that growth. If the economy keeps growing, so will the market. So unless the election chaos slows or stops the growth of the U.S. economy over a period of years, it should not derail the market over the long term.

Could the election do just that? I doubt it very much. We could—and very likely will—see a disputed election result. But there are processes in place to resolve that dispute. One way or another, we will have resolution by Inauguration Day. While we will almost certainly have continued political conflict, we will also have a government in place. From a political perspective, any continued conflict should not disrupt the economy and markets any more than we are already seeing.

The political disconnect between the two sides is not going away. But we already are seeing the effects, and the election won’t change that. The election will be when that disconnect will spike, but that spike will be around a distinct event with an expiration date. The effects likely will be real and substantial, but also temporary.

What Should Investors Do?

We certainly need to be aware of the effects of the election. But as investors, we don’t need to do anything. Like any specific event, however damaging, the election will (as others have) pass. We will get through this, although it might be rough.