I spend most of my time thinking about economics and the economy, but over the past several years, that has increasingly included a healthy side helping of politics. When the crisis hit, going on 10 years ago, economics did not go away, but it became subordinate in many ways to politics, broadly interpreted. The intervention of the federal government and the Federal Reserve in the economy fundamentally changed how we ran the country, how we invested, and how we understood economics.

That’s not how it’s supposed to be, of course, and a great deal of lip service has been paid over the years to getting the feds out of the picture. As usual, when all's said and done, more was said than done. But somehow, here in 2017, we find that the economy is basically back to normal. 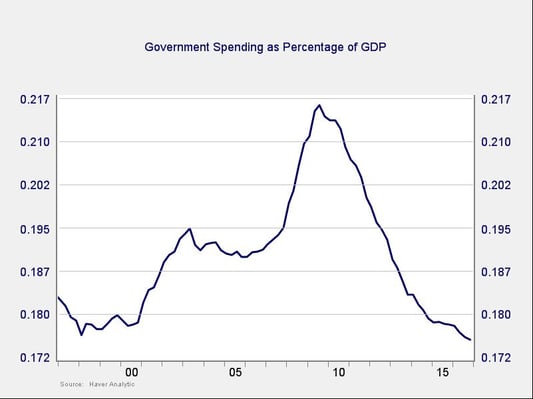 Government spending growth has also dropped, per the following chart, to around 2 percent per year, after several years of declines from 2010 to 2013. The current level of spending growth is the lowest in the past 20 years, apart from the post-crisis period, and well below levels of previous eras as well. 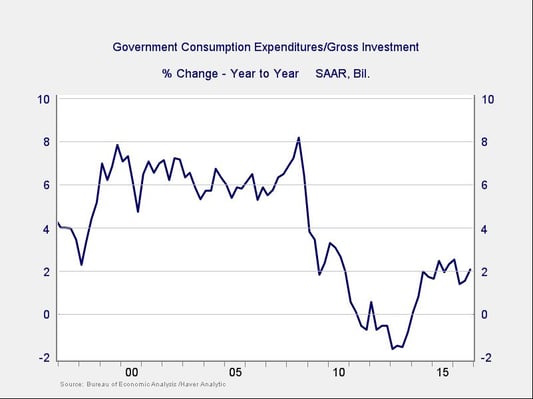 This is not the usual narrative, but the facts speak for themselves. At a fundamental level, policy and politics are just a smaller part of the picture.

It’s not all about government spending, of course. The Federal Reserve has been (and will continue to be) a huge influence on the economy, but it is starting the pullback process as well. We hear much more about the risks of active monetary policy now than we do about the benefits, and there is a clear intent to pull back—in a gradual and responsible manner, of course.

The other major component of government that affects the economy is regulation. Here again, we don’t have much action as of yet, but deregulation is clearly on the Trump administration's agenda.

Market seems to be decoupling from politics

With all of the turmoil in Washington in recent weeks, one of the real mysteries is why the financial markets have largely ignored it. Indeed, even as the Trump administration faces controversy after controversy, markets keep hitting new highs. What’s going on here?

In fact, as we can see in the charts above, the influence of Washington on the economy, for better or for worse, has been declining. Even amid the turmoil, the fact that the general trends are considered favorable limits the amount of damage noneconomic issues can cause. The economy has largely decoupled from politics, at least at the financial market level.

In my view, this is due, at least in part, to the reduction in uncertainty the election provided. With a clear result and a unified government, the election gave people freedom to look at the economic facts on the ground, and they liked what they saw. Now that consumers and investors are more focused on what is actually happening, and less on the noise from Washington, they are unlikely to shift their focus back. At this point, it’s largely what is really going on in the economy and companies, rather than policy, that influences attitudes, behavior, and markets.

This has directly led to the transition we observe now, where markets are increasingly driven by fundamentals rather than policy. A year ago, Janet Yellen hinting at rate increases would have shaken markets, but not now. Today, markets are focused on rising earnings, high consumer and business confidence, and the very real chance that growth could accelerate.

Markets' lack of response to the turmoil in Washington indicates that policy is retreating to its proper place—influential, but not determinative. This, more than anything else, is a good sign that the economy and markets are, at last, really normalizing. We’re probably not fully there yet, but we are at the beginning of the end of that process.