Why Is Consumer Spending Down? 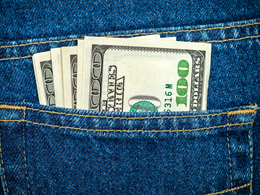 I suspect, however, that this is an illusion created by a deeper problem. Consumers have the money—in fact, net worth has recovered to an all-time high—they just aren’t borrowing and spending.

It seems kind of strange to say that consumers need to borrow more, and that’s not what I’m suggesting. But it is a fact that consumer spending growth has been disappointing, and part of the reason for that is they’re not borrowing.

Personal savings on the rise

There are a couple of ways to look at the situation. First of all, as the chart below shows, the personal savings rate has actually climbed over the past several years. 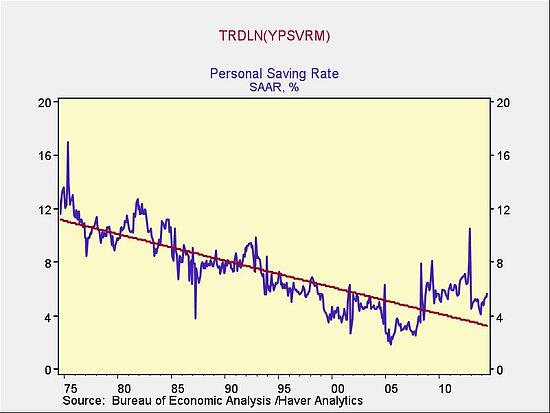 We see a steady decline in the savings rate from the mid-1970s through the mid-2000s, and we see it bounce back up during and after the financial crisis. Interestingly, it has dropped a bit in the past year or so, but now seems to be creeping up again.

An article in today’s New York Times includes a good chart, shown below, that breaks down many of the subcategories of assets and liabilities. 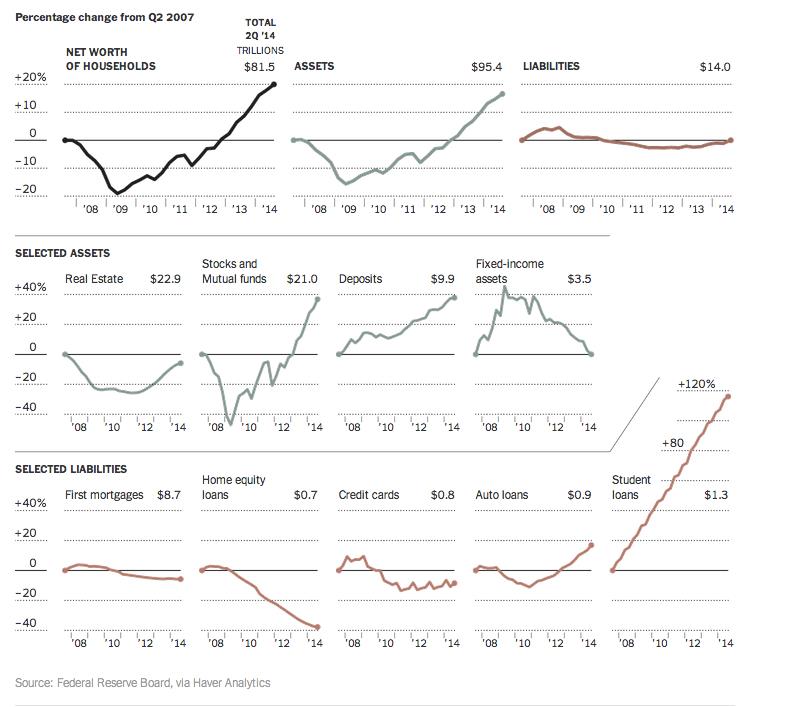 Overall, the increase in the savings rate has been a good thing. It has helped bring household net worth back up to record levels, which has substantially stabilized the U.S. economy.

Household net worth is at all-time highs and has grown significantly over the past year. This increasing net worth comes from two areas: cash savings (shown as deposits above) and rising equity prices.

Higher cash savings is certainly a positive, but rising equity prices may be somewhat illusory as a foundation for greater spending. It may well be that, after two booms and busts in the past 15 years, consumers now realize this, which is holding spending growth back.

Unlike deposits and equity investments, debts have largely decreased, either paid off or written off.

Mortgage lending could be the key

The question going forward is not whether borrowing will pick up again—at some point it certainly will—but whether it should. Looking at the numbers, you can make a good case that, for real estate at least, it ought to.

I suspect part of the problem with consumer spending right now is that it’s constrained by first-time buyers having difficulty getting mortgages. Banks are unwilling to lend and have, arugably, raised the bar too high.

The reason for this? Low interest rates.

When rates tick up, spending should increase

At current rates, it simply isn’t profitable for banks to make many loans. A surprising amount of spending is predicated on buying a new home, including such items as furniture, lawnmowers, and similar items. When banks start opening the taps for mortgage loans, the “problem” of too-slow spending growth will disappear as households settle in.

The Fed, by exiting its interest rate-suppressing policy, will be doing the economy a favor. Normalizing interest rates is a necessary prerequisite for normalizing the mortgage market and also consumer spending.

So don’t worry that consumers aren’t spending. They will, soon enough.