Why Aren’t Your Investments Doing Better?

As we approach year-end and you look at your investment statements, there is bound to be much discussion about how your investments performed. As has become usual in the past couple of years, there will be questions about and comparisons between what we expected and what we actually got. In other words, with the economy doing well, why aren’t your investments doing better?

This question is especially relevant given how well markets have performed over the past several years. U.S. stocks, in particular, have been on a tear.

As you can see in the chart below, the S&P 500 (the green boxes) has been doing well, in both relative and absolute terms, since 2013. Not only that, with the exception of 2015, the returns for most types of investments have been extremely strong since 2012. We have gotten used to doing very well with our investments. Why isn’t that the case this year? 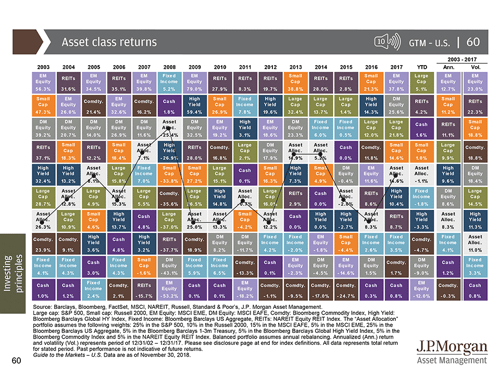 This is a valid question. What it gets to, though, is a deeper and more meaningful question beyond how your investments did this year. We should take it a step further and ask, what should we expect from our investments—and why?

A look back at last year

If we looked at our statements last year at this time, for example, we would have seen strong returns. The Dow Jones Industrial Average was up by 28 percent, the Nasdaq by almost 30 percent, and the S&P 500 by “only” 21 percent. A 60-percent stocks/40-percent bonds allocation between the S&P 500 and the Bloomberg Barclays U.S. Aggregate Bond Index, which is a reasonable shorthand for a balanced portfolio, would therefore have returned about 14.5 percent. That balanced return, at 14.5 percent, is a heck of a lot better than most investors are doing today.

The way we got there, however, was that pretty much everything except bonds was up by double digits. In that kind of year, you would do very well. This year, however, we have the reverse.

What about this year?

Looking at the results from this year, only two asset classes—the S&P 500 and junk bonds—were making money at the end of September. With the market declines since then, pretty much everything is either in the red or close to it. There simply has been no place to make money this year, and portfolio results reflect that.

No one likes this, of course. But it has happened before, in 2015 and to a lesser extent in 2011. This is a normal event, although not an especially common one. You typically see it after a couple of years of strong returns, such as we have just had. Nothing is making money; consequently, neither are we.

What should we do about it?

What can we do about it? Maybe investing is broken, and markets are headed down indefinitely. Maybe we are headed into a multiyear bear market. Maybe we should derisk—sell out of stocks and look for something less risky since we are not getting paid for the risk we are obviously taking. But why stop there?

If that is the plan, why not move entirely to cash? Right now, cash yields about 1 percent to 2 percent, which is better than we have seen elsewhere. Cash is also safe.

In any given year, a balanced portfolio of stocks and bonds is likely to outperform—but not always. The stock and bond markets have done very well over the past couple of years, but they have also periodically done quite poorly. And, of course, if you include 2000 and 2008, it is clear there is very real risk that goes with those high returns. You never know which it will be. Over time, we get gains but also, occasionally, disappointing losses.

Diversification rather than focus

The answer to this problem, of course, is diversification instead of focus. Rather than focusing on cash—or whatever else did well recently—you need to spread your bets around. By doing so, you are less exposed to the standout investments but also less damaged by the bad ones. You will make less and lose less. Over time, your returns will fall within a narrower range.

You can see that in the chart above as well. Note how the whitish box, the asset allocation diversified portfolio, is never the best performer but also never the worst. Sometimes, though, it does lose money, as in 2011, 2015, and this year so far. Occasional short-term weakness is the price we pay for gains over time. In 2018, we are seeing that scenario play out.

Bad years are part of the process

Although it’s easy to be disappointed by investment performance over the past year, it is just one of the inevitable outliers that result from a diversified strategy. Over time, we will see good periods and bad periods. But a diversified approach can potentially help maximize performance and reduce risk compared with a more focused strategy.

The key is not to get so caught up in the short-term concerns that you forfeit the longer-term gains. It certainly doesn’t make it any more tolerable to see a year like this one, which looks like wasted time. Years like 2018 are, however, part of the process—just like great years like 2017 are as well.

So, why isn’t your portfolio doing better? Quite simply, it has to be that way sometimes.