When Assessing the Economy, Mind the Gaps 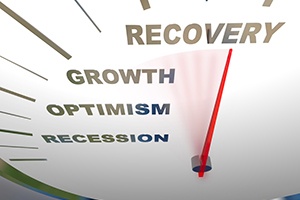 A friend of mine, a construction manager, once taught me a valuable lesson about evaluating the quality of a building: examine the edges, the corners, and where one material connects to another. Handling the transitions well requires skill, expertise, and time—and not all builders are able to pull it off.

Similarly, when I look at the economy, I try to focus on disjunctions, places where data should connect smoothly but doesn’t.

The biggest disjunction right now is between sentiment (how consumers and businesses feel) and actions (how they’re actually spending their money).

Sentiment is and has been terrific, with a major spike after the election. In many cases, confidence is at levels we haven’t seen since 2000. Business confidence is actually higher than it was in 2007. Everyone apparently expects the economy to accelerate to a much faster pace, and to do so quickly. Based on expectations, everything looks good.

What people and businesses are actually doing, however, isn’t nearly as positive. Retail spending growth is anemic, business investment and spending continue to fall short of expectations, and the data suggests more of the same slow growth we’ve grown accustomed to. No acceleration here.

So which is right?

History suggests that, when the two disagree, the hard data wins and sentiment declines to match. Although it’s too early to tell, there are initial signs this may be happening. Many surveys are off their highs, albeit slightly, suggesting that the spike in confidence may not last. Despite some good news, the hard data isn’t rising as much as the sentiment would indicate. The slow growth path looks more likely at this point.

What could reverse that? Much of the spike in confidence came after the election and was based on the idea that a unified Republican administration would take effective policy action to boost growth. So far, at least, that hasn’t happened, prompting the pullback, but it still could. Tax reform and regulatory changes—and potentially even action on health care—could all boost confidence again.

The other possibility is that confidence isn’t as far ahead of reality as the numbers would suggest. With employment still growing and wage growth steady, spending might indeed be increasing, but with a lag. It’s too early to write off real improvements, particularly in business investment. That said, the lag is getting longer and longer, so if it’s going to show up, it better do so soon.

Another disjunction relates to the Federal Reserve’s gradual increase in interest rates and pending disposition of its securities portfolio. Again, we need to compare what happens with what is expected—and focus on the gaps. Right now, the biggest one is between what the Fed says it will do (continue to raise rates relatively quickly) and market expectations (that rates will increase more slowly).

These two gaps are, of course, related. Slower economic growth should restrain the Fed from aggressively raising rates. Historically, though, once the Fed gets worried, it hikes rates and keeps going regardless. There are signals that may be happening again.

As investors, it’s important to remember that gaps are where things can break. Right now, the gaps between the hard and soft data—and between the Fed’s actions and market expectations—are worth watching. This is where the economy could end up falling off.