What the Low VIX Means for the Stock Market

I’ve written before that there’s generally more downside risk in the stock market than investors expect. One way to account for that is to look at the VIX.

What is the VIX?

Wikipedia defines the VIX as “the trademarked ticker symbol for the Chicago Board Options Exchange Market Volatility Index, a popular measure of the implied volatility of S&P 500 index options. Often referred to as the fear index or the fear gauge, it represents one measure of the market’s expectation of stock market volatility over the next 30-day period.”

In other words, the VIX measures how much risk there’s perceived to be of a serious drop in the stock market in the near future. When it’s low, investors are quite confident; when it’s high, people are scared.

Where do we stand now? 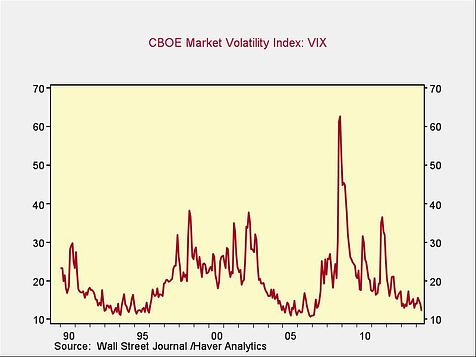 Is it a coincidence that very complacent investors, with very little fear, then bid up prices to levels that led to a significant decline? I don’t think so. A great economist, Hyman Minsky, pointed out that stability breeds instability. The longer things are good, and the less worried people are, the more likely they are to take risky bets, use leverage, and do other things that will have large consequences when the situation changes.

Based on the chart, we see that low VIX numbers can continue for several years, as they did in both the mid-1990s and mid-2000s; this does not seem to be a warning sign. The VIX’s current low level is something we should be aware of—but not panic about.

Tracking the VIX and the market over time

Another approach is to see if changes in the VIX over time have anything to tell us about movements in the market. Let’s take a look: 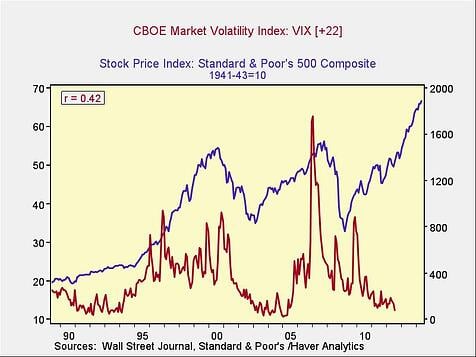 The data here is very messy, as it usually is with economic and market figures. What does show up on the chart above is that the best fit—when the correlation is highest—happens at about a two-year lag. (About two years from when the VIX ran above 20 is when the correction set in.)

If history is any guide, no correction in sight

Make no mistake, this is not good data: it’s too noisy, and there are really only two data points in it. But, based on historical patterns, it does suggest that the current market complacency doesn’t imply a correction anywhere in the near term. When the VIX starts rising again, we can take another look, but even there, history suggests it could be a couple of years.

As I’ve said before, fundamentals tell you where you’re going, while technicals can help tell you when you’re leaving. Like moving averages, this technical suggests we may continue up for a while yet. 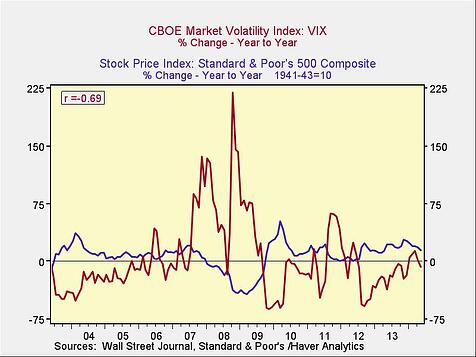