What Q2 Earnings Mean for the Stock Market

This week is the start of earnings season, when companies report their financial results for the previous quarter. After a difficult first quarter, many are looking to Q2 earnings to answer an important question: will things be as good as expected in the second half of the year?

What does the market expect?

According to FactSet, the expected earnings growth rate is 4.9 percent, down significantly from the 6.8-percent growth expected at the end of the first quarter. Companies’ guidance was negative by a three-to-one margin—84 companies guiding down versus 27 guiding up—which is well above the usual figure.

Although growth is expected to come in above first-quarter levels, the mix of negative expectations from companies and downward revisions of analyst expectations suggests it might not be as strong as anticipated.

The very limited results that have come in so far, though, are encouraging. Alcoa, the first of the S&P 500 companies to report, posted excellent results on Tuesday, well above expectations. As of last Friday, 73 percent of the companies reporting had beaten analyst estimates.

The strong results thus far, particularly from Alcoa, which is seen as a bellwether, make the weak market performance this week a bit surprising. Given continued good economic reports and the Fed’s supportive minutes, you might have expected the market to rally. It hasn’t, which perhaps suggests some caution with respect to future earnings growth.

In my opinion, that caution is warranted. The 4.9-percent expected earnings growth is based on expected revenue growth of only 2.7 percent, so earnings are expected to grow almost twice as fast as sales.

Cost-cutting is needed to support that kind of discrepancy. But sustained cost-cutting requires greater efficiency, which is at odds with the reduced productivity figures we’ve seen for the economy as a whole recently. It’s also at odds with the rising unit labor cost figures, and with rising price inflation across the board.

The problem here is that, as stock prices rise, it's more expensive for companies to buy the same number of shares; they need to spend more every quarter the market goes up to get the same effect. With current stock buybacks already at the highest level since before the financial crisis, any additional increase moves further into record territory, as this chart from FactSet shows. 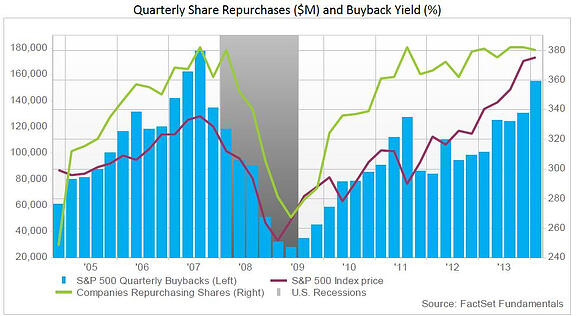 Setting ourselves up for disappointment?

In short, to hit earnings expectations, companies need to grow their earnings at three times the sales growth rate, either by increasing record margins even further (in the face of rising costs and dropping productivity) or by buying back even more expensive shares.

Unless Q2 earnings come in much stronger than expected, the probability of disappointing future earnings growth is quite high. That might not matter in a cheaper market, but with market valuations as steep as they are now, any disappointment could have serious consequences.