What Do Rising Medical Risks Mean for the Economic Outlook? 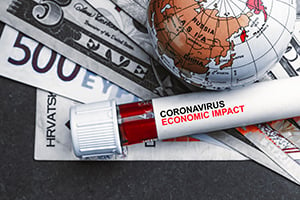 It was about three weeks ago that I ended the regular coronavirus updates as the medical news had improved sufficiently that the country had largely reopened and the virus was under control. Since then, unfortunately, we have seen infections tick back up, and it is clear that—from a medical perspective—the virus is still with us. Thus, this update discusses where we are now and what it might mean going forward.

The most recent data clearly shows the Delta variant of the virus has led to a new wave of infection growth. Although the effect has been limited so far, the medical risks are back on the table. The economic damage has been limited, as the country has reopened and the economy is growing. But here, too, there are signs risks may be rising.

Part of what’s driving this faster infection growth is the slowing rate of vaccinations, which has left large proportions of the country vulnerable to the Delta variant. Another major driver looks to be the reopened economy. While this reopening has led to faster growth, it has also led to more public activity and exposure. And with the wide abandonment of masks, unvaccinated people are more at risk than ever.

The good news is that we may be starting to see vaccination rates rising again, which should help control the risks. Conditions at the national level remain stable, as most of the outbreaks so far have been localized, as expected. With more vaccinations and appropriate public policy, those outbreaks are containable, which is more good news.

From an economic perspective, the news remains good as rising infection rates have not yet translated into more economic restrictions. Job growth remains strong, layoffs continue to trend down, and confidence and spending are high. The major economic problems remain those of success. While medical risks are rising, the economic news is positive—and is likely to stay that way.

Despite the rising medical risks, the overall outlook remains positive, although we do need to pay attention. So far, markets are clearly discounting the risks, as they remain close to all-time highs. Plus, with corporate earnings continuing to do well, there may well be more upside ahead. Let’s take a look at the details.

Case Growth Levels on the Rise

New cases per day. The most obvious metric for tracking the virus is daily new cases. Case growth has risen over the past three weeks and is now back to levels from mid to late May. At this point, another national infection wave looks unlikely, as most of the outbreaks are restricted to locales with low vaccination levels, but the risks are increasing. This may well be due to the spread of the more contagious Delta variant and raises the risks of a further worsening of the trend.

The seven-day average of new cases per day was 26,704 on July 14, up from 13,618 two weeks earlier, an increase of 96 percent. Case growth is now at levels we last saw in mid to late May, erasing the improvement in June and early July. The trend in infection growth is clearly back up.

Testing news. The testing news is also getting worse. Overall testing numbers have spiked back up, which is reasonable given the increase in the number of cases, and the positive test rate has now risen to close to 5 percent. This is a level that signals widespread infection exposure and one we have been below since April. This is a worrying development. 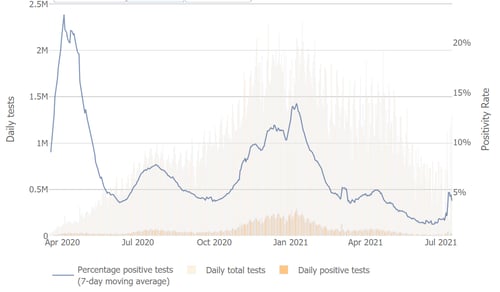 Vaccinations. The deterioration in the medical news is at least partially due to a slowdown in vaccinations. As the medical news improved, many people elected not to get vaccinated and to abandon policies such as mask-wearing. While more than 55 percent of the U.S. population has had at least one dose of the vaccine and 48 percent are fully vaccinated, the rate of vaccinations has slowed sharply. We may now be seeing the effect of the slower vaccination rate in a rising new case rate in many areas. That said, we do seem to have hit containment levels nationally, and herd immunity in many states is now within reach. Much of the current infection growth is in low vaccination areas, which may limit the national impact. 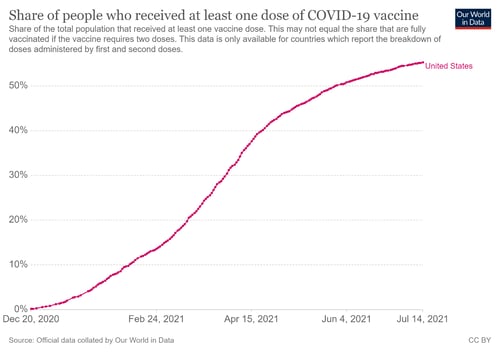 Despite the medical news, the economic data continues to get better overall. Job growth continues to improve, while layoffs continue to edge down and job openings to grow. Consumer and business confidence remain high, and spending and investment are healthy. Overall, the economy has now reopened, and growth continues. Many of the problems we do observe are those of success, which are the kind of problems we want to have. As employment continues to increase and supply chains to heal, we are very likely through the worst of the economic impact of the pandemic.

Markets saw more new all-time highs in the past month, supported by the good news on the medical and economic fronts, as well as much better-than-expected corporate earnings reports. Since then, the stock market has bounced around, looking for the next set of good news, but it remains near those highs. While the medical risks are rising, so far at least, both the economy and markets have been unaffected.

We have seen the medical risks rise in the past several weeks, as infection growth has accelerated again. Those risks remain focused in areas with low vaccination rates, however, and the risks of a national shutdown are low. So far, the country remains open and the economy is growing, and that will likely continue unless medical conditions get much worse. Markets continue to do well and may have more upside ahead.

Even as we keep an eye on the risks, we are still at a place where they are specific rather than systemic. We are seeing localized outbreaks but likely not national ones. We may see glitches in some markets (e.g., labor or supply chains). But, in general, conditions are improving. This shift is good news, as it means the difference between specific problems and a general shutdown, whether medical or economic. Right now, the good news is that the specific problems we're seeing, and are likely to see, will be solved. The better news is that the more of those specific problems that get solved, the less risk—and the sooner we get back to normal.

Although risks are rising, these are problems we know how to solve. As such, we are still in a much better place than we were only a couple of months ago. While there are very real risks, at a national level, we can still see normal ahead of us.