What Do Corporate Earnings Tell Us About the Rest of the Year? 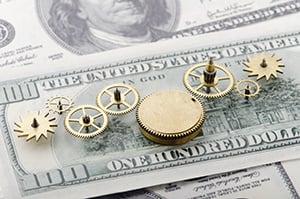 One of the big surprises over the past couple of weeks has been the strength of corporate earnings for the first quarter. As of the end of last week, according to FactSet, seven of eight companies (about 440 companies or 88 percent) had reported. Of these 440 companies, about 385 (86 percent) beat expected earnings. These are the highest levels of beats on earnings seen since the start of records in 2008.

When you look at the absolute performance, the news is just as good—and just as surprising. For the first quarter, so far earnings are up by almost half (49.4 percent), which would be the highest growth since 2010. At the end of the first quarter, analysts expected earnings growth of 23.8 percent, so the actual number is more than twice that. For both expectations and absolute performance, this is an extraordinary gap between what analysts expected and what companies produced.

So, that’s where we are right now. But what does it tell us about the rest of the year?

First, analysts as a group are responding. Not wanting to get caught short again, analysts have pushed estimates up for the rest of the year. Second-quarter expected earnings growth is now almost 60 percent, dropping to 22 percent in the third quarter and 16 percent in the fourth. For 2021 as a whole, earnings growth is expected to be 32 percent, on revenue growth of 11 percent. Should we believe these numbers?

Let’s start with the top line, sales and revenues. So far, three-quarters of companies are beating expectations for the first quarter. Both the beats and the beat amount are at the highest level since records started in 2008. More, this very strong performance comes from a first quarter that was economically strong but that also had significant weaknesses. This result suggests that companies have learned how to keep selling in a pandemic environment and will likely take advantage as the economy improves. It is a very positive sign going forward, as the economy continues to recover and grow.

But as we move down to earnings, the news is even better. Earnings growth is expected to significantly exceed revenue growth for the next three quarters, as companies scale their operations with the recovery. As noted above, earnings growth is expected to rise even further next quarter and to stay in double digits for the rest of the year. If you believe the analysts, there is still substantial upside ahead in corporate performance, well above sales growth levels.

But you shouldn’t believe them. Historically, analysts have been too skeptical and have underestimated earnings. Not, to be sure, by as much as they did this quarter, but we can still expect earnings to continue to outperform those expectations. With the economic reopening accelerating, with confidence high, and with available savings, the fundamentals support that outperformance as well. While the earnings news so far tells us things are going very well, the economic fundamentals give us quite a bit of running room for the rest of the year.

Why Were the Analysts So Wrong This Time?

Probably the biggest surprise from this earnings season is the magnitude of the earnings gains compared with the sales gains. Companies are simply making more money per dollar of sales. Much has been made of the damage the pandemic has done. But on the positive side, it forced companies to reevaluate their operations, cutting costs and simplifying processes. What we are seeing this earnings season is that as the rest of the world normalizes, pushing sales back up, those operational improvements are allowing much more profitable operations. This is the primary reason for the earnings surprises: companies are simply more efficient now than they were a year ago. Analysts as a group are learning to account for those improved operations, and that will take time.

And that is the takeaway here. The economy is reopening and companies are selling more, which is great but not really news. Analysts have that under control. The news is how much more companies are making and why. What this quarter’s earnings data shows is that companies are now able to wring out more profits from every dollar of sales, and that is a good sign for markets as sales continue to rise. Analysts are still working on quantifying that. But as investors, we can see that with valuations holding steady, higher margins and earnings should give us more market upside through the rest of the year. That is a good message from this quarter’s earnings season.