Two Economic Risks for the U.S. 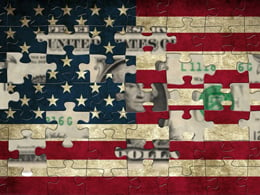 As I mentioned in my post about the latest employment numbers, I’ve been focusing quite a bit on all of the good things happening for the U.S. economy. But that doesn't mean I'm not paying attention to potential threats.

Let’s take a look at a couple of economic risks the U.S. faces.

The first risk is the flip side of one of the major success stories of recent years: the oil fracking boom.

Fracking has created large numbers of high-paying jobs. Indirectly, it has generated even more jobs for suppliers, vendors, and ancillary services that depend on the oil industry. Many of these jobs, especially in the early part of the recovery, relied directly on the oil boom.

Now that oil prices are down, though, much of the drilling activity has slowed or stopped, and what continues will certainly diminish. Jobs will get hit, directly and indirectly, as will business investment. How much will this hurt the wider economy? This is a very valid concern.

Early in the recovery, this could have stopped it in its tracks. At that time, the oil boom was the recovery. Now, though, when you look at the total number of fracking-related jobs, they’re a small percentage of what have been, and are being, created. Similarly, when you look at the sources of economic growth, what was being driven by business investment—oil drilling—is now being driven by consumer spending.

This is more of a yellow flag than a red one. Although the signs are good that the recovery will continue and that lower oil prices will cause more stimulus than slowdown, an important sector of the economy has shifted from a tailwind to a headwind.

The second big risk we need to consider involves the labor force. Much of the improvement in the unemployment numbers has come from hiring among people still looking for work. Last month, however, we saw the first signs that others who had dropped out of the labor force might be moving back in. If that’s the case, unemployment may creep back up and keep wage growth low. This is the argument of those who say the real unemployment rate is higher than the figures show, that there are many people out there who want jobs but have given up.

This is probably true, to some extent. Depending on the magnitude and speed of this effect, unemployment could be pushed up quite a bit, which would be worrying. On the other hand, the fact that the economy is now generating enough jobs to draw those people back in suggests an underlying strength. As the total number of jobs increases, the unemployment rate becomes less meaningful, especially if it is driven by people moving back into the job market and not by a loss of jobs.

The real risk here is that wage growth rates will remain lower for a while longer. But, with the total number of jobs increasing, wage income will likely continue to rise, which would continue to support economic growth—just as we’ve seen over the past couple of years.

And don’t forget about the weather

A final pseudo-risk that’s probably worth getting ahead of is the weather. As I write this, we're seeing another 24 inches or so of snow here in Boston, right on the heels of another “historic” storm.

You may remember the terrible first quarter of 2014, which was driven by weather but generated lots of concern about the recovery being derailed. Expect to see more of the same if the weather hits the economy this quarter, which it well might.

How worried should we be?

Although there are real concerns for the U.S. economy, I don’t see them as game changers, at least in the near future. Headwinds, quite possibly, but we now have so much momentum that we should continue to move forward in spite of them.

Outside the U.S., of course, there are risks that are potentially much larger and more worrisome. I will talk about those tomorrow.

What do you think?

What risks am I missing, either here or abroad? Let me know in the comments section, and I'll address them in later posts.