I am old enough to remember the last time an Asian economic superpower was going to take over the U.S. Back in the day, we heard a lot about how Japan was inevitably going to overtake the U.S. because of its superior work ethic, economic efficiency, and availability of low-cost capital because of high savings rates—and particularly how its government was so much better at managing its economy through agencies like MITI. Loud cries were heard that the U.S. needed to heed the lessons of Asia and become more like the Japanese. Does this sound familiar today?

Unfortunately, in many respects, we have become more like the Japanese. But that is the subject of another post. What I want to talk about right now are the similarities between China and Japan, especially about how Japan never looked as invincible as it did just before its two lost decades started. 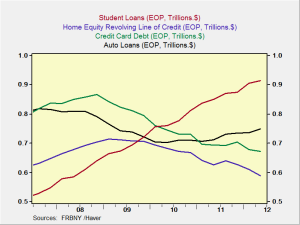 10/23/12 – The Next Crisis: Student Debt and the Future of Higher Education

The market is a beautiful thing. Money flows to what people want, and the end result is that the optimal balance of desires and available resources is obtained with minimal guidance and intervention.

Oh, yes—spending cuts! The papers this morning are all about both. The key article, and the one most people (160 million of them) will be talking about shortly is on the front page of the New York Times (NYT), “Payroll Tax Rise for 160 million Is Likely in 2013.” The expiration of the 2-percent payroll tax on earnings will hit everyone immediately in the new year, and it’s not likely to be reinstated.

This is just a part of the fiscal cliff, which is becoming clearer and clearer as the election approaches. Taxes will be going up, and spending will be cut—the question is how. “Way round the fiscal cliff still unclear” on page 2 of the Financial Times (FT) is pretty self-explanatory and leads with the conclusion that Congress is unlikely to resolve the issues in 2012, leaving another potential pending crisis in 2013. Patriotic citizens are glad to contribute more, led, of course, by private equity managers. According to “Private equity managers fear tax hit” in the FT (p. 17), they are attempting to rewrite existing agreements to specify that they will make more money to compensate if their taxes go up. Clients, unsurprisingly, do not seem to be in favor. No doubt, the managers want to make sure they can continue to spend and stimulate the economy, which will then trickle down.

I was never a big fan of Popeye. The whole eating-your-spinach thing wasn’t what I was looking for as a small boy. The Federal Reserve (Fed), however, seems to be a fan of Popeye’s friend Wimpy, as the thrust of its recent policy has largely been to pay later for the hamburger we eat today.

The most recent quantitative easing (QE) program is a great example. Rather than just pushing off deleveraging for a while, the unlimited asset purchases—at least until the economy recovers—aim to stop it completely. If it were that simple, the problem would have been solved already.

No news is good news

Many stories today that deal with issues we have discussed before, with only two new things really worthy of note.

Gloom covered the front pages of the papers today. (If it bleeds it leads!) But this time, there were relatively few silver linings to help brighten up the darkness. Perhaps all the problems we saw in the spring aren’t quite solved yet.

Economic weakening was the big meta-story. For Europe, it was reported in the form of increasing disputes about how to resolve the ongoing financial problems of Greece and Spain, among others. The Financial Times (FT) led with “Athens and Berlin in public spat over funds,” which is just what it sounds like, following with “Dutch socialists catch scent of victory” (p. 2). This is important because Holland, which is one of the few remaining AAA credits in Europe, has been a key German ally in demanding fiscal austerity from debtor nations. If Holland changes sides, the European balance of economic power shifts, too. Moreover, the socialists are eurosceptics and have opposed the fiscal rescue pacts and funds; take away the rescue mechanisms, and the euro would most likely have already failed. The Dutch election and the pending ruling by the German Constitutional Court are therefore both potential deal breakers for the euro. It should be an interesting early September. The New York Times (NYT) also weighed in with “Europeans to Debate Further Aid to Greece” (p. A4) and “European Officials Meet as Signs Point to Recession” (p. B3).

The big financial news yesterday was the release of the Federal Reserve (Fed) meeting minutes, which were widely interpreted as signaling that the U.S. economy will receive additional monetary stimulus very soon. The news made the front pages of the Wall Street Journal (WSJ) with “Fed Moves Closer to Action” and the Financial Times (FT) with “Fed shows a strong consensus for action,” as well as the front business page of the New York Times (NYT) with “Many at Fed Ready to Act if Necessary.” These articles all seem to agree that the Fed will provide additional easing unless the economy improves sharply and unemployment starts to drop much more quickly than it has been. This is also the consensus of the private economic forecasters I follow, as well as Commonwealth’s Investment Research team.

What is interesting about this story is the unanimity of reaction in the press and economic community—and the absence of reaction in the equity markets. I would have thought that the markets would have responded more positively to the prospect of additional stimulus. The fact that they did not means that either the market already expected more stimulus—which is probable—or the Fed is losing its ability to goose the markets. If it is number 2, this is not good.

One Step Back, Two Steps Forward?

Similar to yesterday, today is quiet with lots of clouds but also some beams of sunshine. I’ll start with the clouds.

Unemployment is a tough story both domestically—“U. S. Faces Battle to Retrain the Jobless” on page A1 of the Wall Street Journal (WSJ)—and internationally—“Joblessness Hits New Highs in Euro Bloc” on page A9 of the WSJ, “Pressure on ECB as unemployment in eurozone hits high” on page 4 of the Financial Times (FT), and “Joblessness in Euro Zone Reaches Record High” on page B8 of the New York Times (NYT). The headlines are pretty self-explanatory, and this is clearly a meta-story with legs in both Europe and the U.S. Note that, although the headlines emphasize solving the problem in the U.S., they merely note that the problem continues to worsen in Europe.

The Fourth Turning: A Book Review

I do not normally read, much less review, books that self-characterize as prophecy. Most such books, especially those written more than 10 years ago, are kindly described as being of historical interest only. To find one that actually got quite a number of things right—both in specific types of events and time frame—is therefore pretty interesting.

It gets even more interesting when the book’s next set of predictions is not only scary, but also in line with its earlier forecasts that proved largely correct.