Time for Another Look at the National Deficit and Debt

Part of the return to normal for the economy and the financial markets has been a decline in interest—or at least media coverage—of the national deficit and debt.

Though understandable, this is a mistake, as the deficit and debt remain a serious problem for the country in the medium to long term.

The deficit has dropped significantly over previous years, down 24 percent year-to-date, and is the lowest for the first 10 months of the fiscal year since 2008. Unquestionably good news, this is the result of revenues rising faster than expenditures, as shown below. 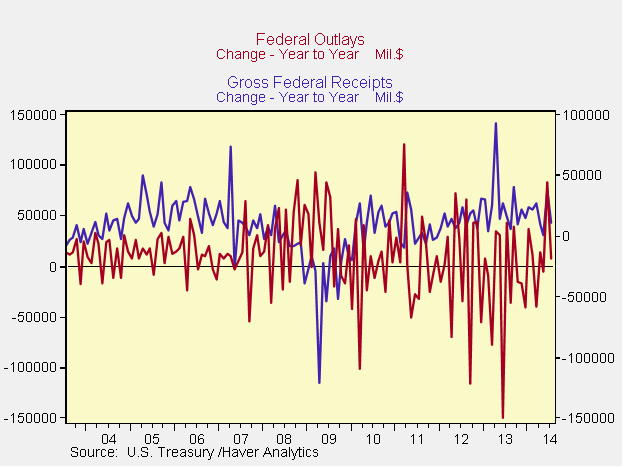 The blue line (changes in government receipts) has been above the red line (changes in government outlays) for about the past three years, leading to the current improvement. Note, though, that the blue line is starting to bend down a bit while the red line trend is bending up. Also note that the lines are close to crossing, at which point spending will grow faster than receipts, and the deficit will start to rise again.

And now for the bad news

The good news is that the deficit improvement is real (though nearing its end). The bad news is that, even as the deficit has shrunk, it has continued to exist and to pile on new debt, although at a slower rate.

Depending on how you measure it, we just hit a milestone: the gross federal debt is now greater than the total economy of the U.S., at about 102 percent of gross domestic product. In other words, if we took every dollar from every final sale in the U.S. in taxes, it would take more than a year to pay off the debt.

You can argue this is just a number, and it is. Some also maintain that the gross debt figure is misleading, that debt the government owes itself shouldn’t count. If you take that out, you get the debt held by the public, which is at a still high but more manageable level of about 75 percent.

This argument has some merit; the Fed, for example, remits the interest payments it receives to the Treasury, so the Fed’s substantial holdings aren’t effectively debt at all. Other governmental holdings, though, do involve real burdens—notably, social security. Because the money has to be paid to retirees in the form of social security checks, the liability is every bit as real as debt held by the public.

So, where do we stand?

The fact that things look much better, and have therefore dropped off the media radar screen, doesn’t mean the problem has gone away. Expect to hear a lot more about the debt and deficit over the next couple of years, particularly in the context of social security spending.

Right now, the money simply isn’t there to meet all of the government's promised spending and benefits obligations. We’re rapidly approaching the point where the fights over what to cut will become nasty again.