The Velocity of Money: 2019 Edition 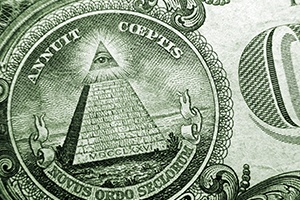 Economic questions come in cycles. Recently, with the relatively hawkish tone of the Fed and the turmoil in Washington, DC, economic worries have spiked again, and the velocity of money has become a hot topic. I last touched on this in early 2017. It has been one of the most viewed posts since then, so clearly it is time for an update.

Despite recent increases, the velocity of money remains low, which has raised concerns. The question is and has always been whether low money velocity presages a crash, a recession, or something equally bad. A fair question. We’ve been down this road before, though, repeatedly over the past several years. A low money velocity did not spell problems then, so we need to think about whether things are now different enough that it could mean trouble now. The answer appears to be no.

Let’s start with some definitions

Money stock. Money stock is conceptually simple, meaning the total amount of money in a country’s economy at a given time. From here, however, it gets complicated. What is included in money? It should certainly include cash that people hold, but how about cash in banks? How about traveler's checks? Bank accounts? Does it make a difference if the bank accounts are checking (available on demand) or savings (which may not be)? How about money market accounts?

You get the idea. Nothing in economics is simple. But for our purposes, we can look at two of the most commonly used measures of money, known in the U.S. as M1 and M2:

These are reasonable reflections of the actual cash in circulation, what the average person has available.

The big thing missing here? The banks. A separate money classification, MB (or the monetary base), includes cash in circulation, cash at banks, and Fed bank credit that banks have access to but do not have in their physical control. In other words, MB is the amount of money that banks have to create actual consumer money, which is shown as M1 or M2.

MB is the most liquid measure of money, largely in its potential. The economy depends on the banks to translate this money into money that is working in the economy. The key point here is that reserves are not actually part of the economy until the banks lend them out; therefore, they don't show up in the usable money stock (M1 or M2) and, as such, do not typically factor into money velocity calculations.

The reason to worry over a low money velocity is if it reflects a shrinking economy or continued slow growth. If, on the other hand, the declining velocity is due to the money supply growing faster than a growing economy, this should indicate a growth problem. It might lead to other problems such as inflation, of course, but that is not the current worry. 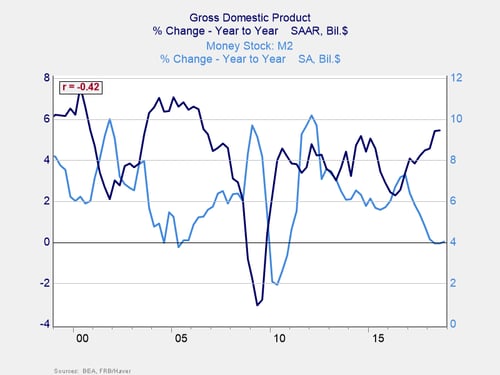 There is no mystery to this. Collapses in economic growth led to stimulus measures, which were then dialed back when things got better. Growth in the stock of money has spiked twice in the past 10 years, after the crisis in 2008 and the European crisis in 2011. But even beyond that, it has outpaced growth in the economy as a whole as monetary stimulus continued. (I have used M2 as the more inclusive monetary number here.) More recently, even as growth has accelerated, money growth has dropped in tandem, again reflecting policy decisions around stimulus.

What should this mean? If the money velocity equation is GDP/M2, and M2 is growing slower than GDP (which it is, for the reasons we discussed above), you would expect money velocity to be flattening out and increasing. And that is just what we do see over the past five years in the chart below. Note the lag between the bottoming out of economic growth and the subsequent increase in the velocity of money, as the Fed kept stimulus measures in place until recently even as growth picked up. The velocity of money is acting exactly as we would expect, based on monetary policy decisions, even though it remains low by historical standards and will continue to normalize as policy does. 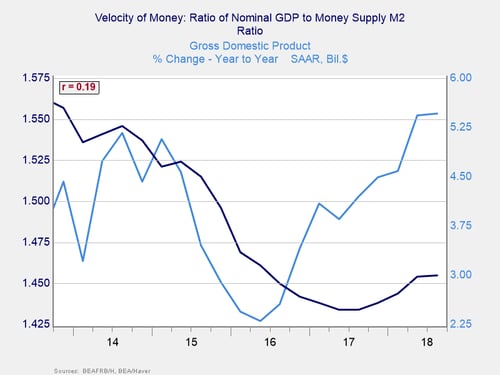 None of this is to say that the velocity of money is not useful information—just that most of the changes over the past decade were the result of the math associated with postcrisis policies, rather than something deeper. Now that those policy changes are being reversed, money velocity is reverting to historical levels.

One way to see that is to deconstruct the policy changes and the economy, looking at the changes in money velocity as compared with economic growth. Per the chart below, we do see a direct correlation and one that makes causal sense. A faster-growing economy means a higher money velocity, even when stimulus is applied, so velocity is a symptom and not a cause. This chart also shows that both growth and velocity are improving in recent quarters, which again is what you would expect if velocity followed growth rather than caused it. Changes in a quantity are often a better economic indicator than levels of that quantity. Here, we see again those changes are exactly what we would expect in a functional economy. 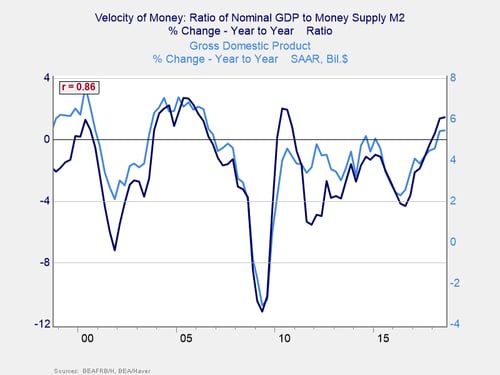 Moving in the right direction

Basically, the decline over the past decade in the velocity of money was due to the math around policy decisions, rather than economic dysfunction. Now that those policies are in the process of being reversed, the velocity trends are reverting to normal. We saw this two years ago, and that trend has and is likely to continue, with both continued economic growth and the ongoing removal of monetary stimulus. Though we have many things to worry about, this is something that is moving in the right direction. Once again, keep calm and carry on.