The Race to Net Zero 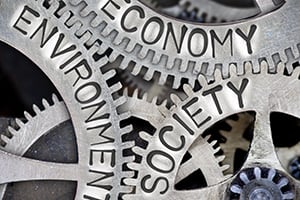 Brad here. As a believer in environmental, social, and governmental (ESG) investing, Commonwealth naturally follows the news surrounding climate change. But even if we were not committed to making ESG available to our advisors, we would follow the news closely. As responsible investors, we need to be aware of what is happening in the governmental and regulatory worlds, and what that means for our portfolios—because the world is changing. Indeed, everyone should keep up-to-date on this topic. Sarah Hargreaves, an analyst with our Investment Management team, gives us an update below. Thanks, Sarah!

When I was growing up, one of my mother’s favorite sayings was, “Cleaner than you found it.” Whether she was referring to our bedrooms, the kitchen, or our sports equipment, we were raised to keep a clean and organized space—despite our frequent, yet unsuccessful, childhood protests.

Surprisingly, we can apply this old adage to the investment community, in terms of the impact our capital decisions have on the environment, our communities, and even the world around us. So, today, I’ll assess the United Nations climate change conference—officially known as the Conference of the Parties (COP)—and its implications for investors.

Since 1994, countries that signed the United Nations Framework Convention on Climate Change have attended an annual summit to discuss, advocate, and implement climate change policies. From the end of October through November 12, world leaders, diplomats, financiers, scientists, and environmentalists gathered at COP26 to accelerate global action and policy toward reaching net zero carbon emissions by 2050. (Net zero refers to removing greenhouse gas emissions that are released into the atmosphere. Emissions are frequently offset by planting trees, practicing carbon capture, and employing carbon storage systems.) Eliminating deforestation and addressing coal dependencies were also top of mind at COP26, as was establishing financial support for funding the transition to green energy remains at the forefront of the agenda.

Deemed the most significant climate event since the 2015 Paris Agreement, COP26 strives to report on the progress of the Paris Agreement, while establishing protocols for cutting carbon emissions. The goals of the conference include:

Many delegates, heads of state, executives, and activists such as Greta Thunberg represented their countries in Glasgow. Currently, more than 130 countries have set, or are considering setting, a target of reducing emissions to net zero by midcentury. President Biden—who led the U.S. in rejoining the Paris Agreement this year—called for a reduction in greenhouse gas emissions of at least 50 percent from 2005 levels by 2030. Other countries followed suit. Saudi Arabia, the world’s largest exporter, pledged to reach net zero emissions by 2060, Brazil pledged to end deforestation by 2028, and India, the world’s third-largest emitter, pledged to reach net zero emissions by 2070.

Many of the world’s largest banks, investors, and insurers were also in attendance. They pledged to incorporate carbon emission reductions into their most fundamental business decisions and to help precipitate the growth of sustainable industries. The Glasgow Financial Alliance for Net Zero—comprising financial juggernauts from 450 asset managers, banks, and insurers—committed $130 trillion to finance projects aimed at companies and countries achieving net zero emissions. The group’s pledge should play a critical role in transforming the global financial system, while also helping businesses and industries fundamentally reform and prepare for a carbon-neutral world.

The Implications for Investors

For investors, analyzing risks is inherent to the research and decision-making process. In a prior post, my colleague Peter Essele outlined the risks of climate change to investors’ portfolios, citing the material threat climate change poses on our daily lives, the global capital markets, and society.

Global action to combat climate change will catalyze change in the form of future governmental action, regulatory policies, and standardized disclosure and reporting requirements. These actions should present new alpha opportunities for investors. As the world shifts away from fossil fuels in favor of carbon-neutral and renewable energy technology, investments are likely to flow into businesses, industries, and geographies at the forefront of this change. Industries such as electric cars, solar panels, and wind turbines are obvious beneficiaries, but businesses that are enablers of carbon neutrality such as battery technology, metals such as copper, semiconductors, and more should also benefit.

Ultimately, companies that are successfully able to evolve in a carbon-neutral world should continue to generate value, while those that fail to adapt risk losing assets, market share, and brand loyalty as balance sheets grow increasingly intertwined to the climate crisis. Perhaps if we embrace the lesson my mother instilled upon me, we will be able to leave the world in a cleaner condition for future generations to come.

Investments are subject to risk, including the loss of principal. Environmental, social, and governance (ESG) criteria are a set of non-financial principles and standards used to evaluate potential investments. The incorporation of ESG principles provides a qualitative assessment that can factor heavily into the security selection process. The investment’s socially responsible focus may limit the investment options available to the investor. Past performance is no guarantee of future results.