Thanksgiving Food for Thought: The Parable of the Turkey

Once upon a time, a turkey hatched in the dead of winter. He lived in a nice warm coop, had plentiful corn and seeds to eat, and spent much of his poult-hood playing with all of the other little turkeys.

When spring came, he and his friends ventured out into the yard and played some more; they continued to have corn and seeds to eat and shelter from the rain. The summer brought more of the same, along with nice people who regularly cleaned the coop, refilled the corn and seed stores after the turkeys gobbled it all up, and chased away scary critters like foxes and cats when they got too near.

“How lucky are we,” said the turkeys to one another. “Surely we have the best of all possible lives. We are fed and taken care of, and all we have to worry about is having fun.”

Summer faded and fall arrived, but still the turkeys lived the good life. When the weather got colder, the farmer turned on the heat in the coop, so the turkeys always had somewhere warm to return after playing in the yard. Of course, since it was cold, they went outside less and less, and they slowly got fatter and fatter.

Still, they said to one another, “How lucky we are,” and agreed that they would take it easy during the winter months so they could play hard again in the spring.

And then came Thanksgiving.

You've probably guessed the lesson for investors in the poor turkey's fate: When times are good, it's easy to get too comfortable, only to be caught off guard when things change.

A large part of my job—and that of my colleagues here at Commonwealth—is to ensure that none of us is a turkey when it comes to our investments. As you've heard a million times, past performance is no guarantee of future results, and this parable highlights the truth of that maxim.

That said, we do have much to be thankful for and plenty of reasons to count our blessings this Thanksgiving. Best wishes to your and yours. 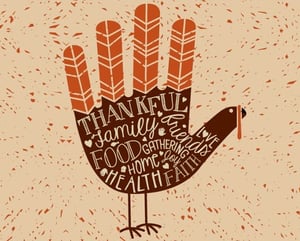 This post was originally published in November 2012, but we're sharing it again in the spirit of the season. Happy Thanksgiving!