The Outside View: India

As we discussed yesterday, Brazil is different from the developed economies in Europe, Japan, and even China, and it presents a different kind of opportunity for investors. With an economy halfway between those of Brazil and China, and a set of advantages that both other countries lack, India is potentially an even more interesting opportunity.

First, let’s take a look at the structure of the Indian economy. India is a more open economy than either the U.S. or Brazil, but less open than most other major countries. The sheer size of India’s population means that the economy will almost inevitably be focused in the country itself. 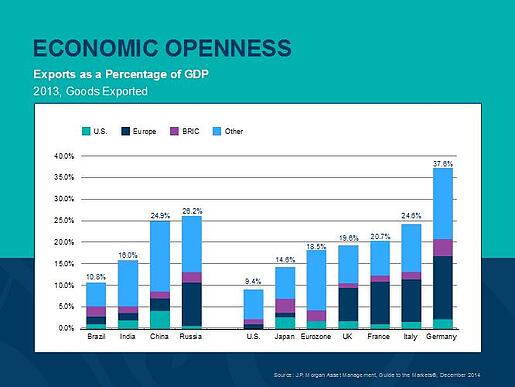 Thinking about that for a minute, though, it seems strange that China—with an even larger population—has a much higher export level. China has spent the past several decades building up its export industries based on its large population and cheap labor, and by focusing on areas where cheap and abundant labor made a difference. If that sounds like India, it should. (We’ll come back to this point in a minute.)

Looking at the export/import structure of the Indian economy, we see some more interesting parallels. Unlike with Brazil, natural resources are not the major component of exports; this is not a resource-based economy. On the other hand, the mix of exports is not like that of developed economies such as Japan, Europe, or China. Instead, what we have is a unique (among major countries) mix of low-tech manufactured goods and raw materials. This mix is actually quite like what China looked like 20 years ago.

I take away two points from this:

Of course, able to doesn’t mean will. Looking at the export mix, however, we see that India is now the only major country operating in the low-tech manufacturing space, which is the one China used to grow as much and as fast as it did. China has moved upmarket, to compete more directly with the developed countries, partly as a matter of choice and partly by necessity, as its labor force declines and wages increase.

India is now well positioned to be the next China, and to grow in the same way.

As always, though, we need to consider whether the country is able to take advantage of its opportunities. Looking at India’s fiscal balance, we do see deficits, but thanks to strong growth, the debt-to-GDP ratio was improving until 2013 and is not in a trouble zone. Combine that with the improving trend on the deficit, and it appears that India will be able to weather rough spots over the next several years. 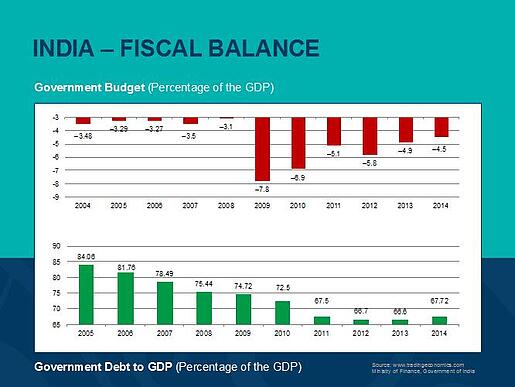 Conclusion: the next China?

Like Brazil, India represents a very different type of economy and a different opportunity for investors. In many ways, it’s even more appealing. With its large population, low-tech manufacturing export structure, and relatively closed economy, India certainly resembles the China of 20 years ago.

Although much of the hype around the BRIC countries was based on their similarities, we have identified substantial differences that largely explain the variations in performance. For India, this is a promising sign for the future. For Russia, which we’ll talk about tomorrow, things don’t look so good.