The Next “Crisis”: The Debt Ceiling 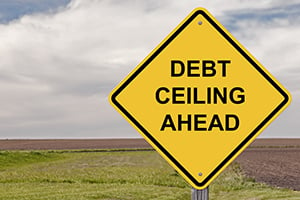 U.S. Treasury debt is universally considered a risk-free asset. But if the government doesn’t pay its obligations—if it defaults—then that risk-free status comes into question. As the foundation of the global financial system, any default could shake that whole structure, rattling markets. On a more extended time frame, as the U.S. credit score goes down, the interest rates we pay could go up. So, this is a bad thing. While this is definitely a manufactured crisis, it is also potentially a real one.

The thing is, however, that it is not at its core an economic crisis. The U.S. can borrow enough money to pay its bills, and that has never been in question. Instead, it is a political issue. It’s not can we pay the bills, but will we. So far, the answer has been yes, eventually. There are almost always political fireworks around the debt ceiling, like this time, and sometimes they actually have extended into a government shutdown. And that is what is very likely to happen this time as well.

From a political standpoint, this is and remains a big deal. The overwhelming likelihood is that we will get a deal before the Treasury runs out of money, but that outcome is not certain. So for political drama, watch this space. We could see another governmental shutdown to conserve money, and we could see dramatic headlines about which bills get paid and which don’t. Expect lots of headlines and lots of public drama.

The Economic and Market Impact

Even if we don’t get a deal and do get those headlines, though, from an economic and market standpoint, the impact would likely be limited. There are tools and workarounds to minimize the damage until the politicians reach an agreement. Yes, there would be a pause in payments, but government bills will be paid, eventually, just as they have been in past debt ceiling confrontations.

Since the bills will be paid, the only real economic impact will be in the delay, and that will be small. We have seen this already, as the direct effect of past confrontations and even shutdowns has been negligible over time. The U.S. economy, thank goodness, is much larger than and largely independent of the government.

From a market perspective, we might see more impact, especially in the short term. Volatility is likely. But as with the economy, once a deal is finally reached, that damage will pass fairly quickly. Again, this is what has happened in past confrontations, with short-term volatility fading once a deal has been reached.

That’s if, in fact, we do not get a deal. But we very likely will. The Democrats may be able to pass a bill raising or suspending the debt ceiling without the Republicans. Some Republicans may join the Democrats to avoid a shutdown or default. There are multiple roads to a successful resolution here. For the moment, then, this is a situation to watch but not to panic about. The risks are real, but certainly not immediate, and even in the absence of a deal not as large as many fear.

I suspect we will be talking about this again in more detail, as we get closer to the drop-dead date—but we are not there yet. As with so many things, lots of things could happen, but most of them will not.