The Most Important Jobs Report?

I watch sports only occasionally, but in the past year or two, I have gotten increasingly into watching pro football—probably as a result of being bored at home during the pandemic and the drama around the turn of the Patriots dynasty. I have to admit, there are some terrific athletes out there. There’s Brady, of course, but many others as well. It has been great to come back to something I enjoyed as a kid.

One thing continues to annoy me, though: the attempt by the announcers to cast any particular game as the “most important” for one reason or another. The other night it was the Brady-Belichick drama that made this game important, but it’s always something. So when I comment on any economic report, I try not to be that announcer. One report is never the most important. What matters are the trends, not individual data points.

A Change in Trend?

Yet I can’t deny the next jobs report, due this Friday, will be important. It’s not the most important, but it’s certainly a significant one. The reason is that, since trends matter, individual reports that can signal (or not) changes in those trends acquire unusual significance. This month’s report is one of those.

On the face of it, that doesn’t necessarily appear to be the case. Job growth over the past year has, apart from a weak December, tended to be between 400,000 and 800,000 per month, with some outliers above and below. Fair enough. Expectations are for the official jobs report to come in between 500,000 and 600,000, and the leading ADP jobs report just came in at 568,000, right in that range. If the number comes in as expected, then we have a continuation of the trend. 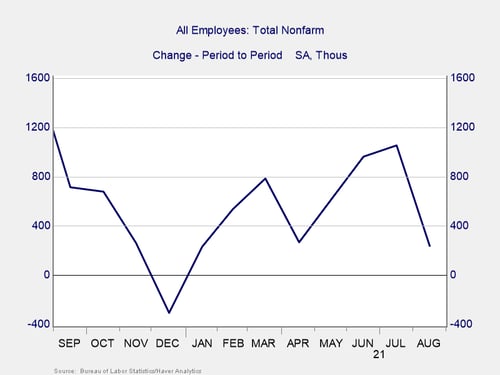 But beyond that general level, we see there was also an upward trend from January on—a trend that got significantly broken by last month’s weak report, which went straight from the high end of the trend to the lower bound. That is a big swing. The question this month is whether it bounces back up and that uptrend resumes, whether the trend moderates with a report in line with expectations, or whether another very weak number indicates the job market trend may well have changed to downward.

What Are the Odds?

Given the improving medical context, with case growth down significantly and the country still open, you can make a case for a recovery from last month, which is why the expectations are where they are. This is certainly the most likely case. The odds of a much stronger report are lower, but if we get that it would show that the economy is moving ahead of the pandemic once more. Either of those would be good news and wouldn’t change all that much in either the economy or the market’s perception of it.

The outlier here would be a significantly weaker report, say under 400,000 jobs created. Coming after last month’s sharp drop and in the face of improving medical conditions, that would suggest the economic damage of the Delta wave is both deeper and more lasting than we now think. Coupled with the declines in consumer confidence and spending growth, it would substantially raise the chances that the current slowdown could turn into something worse. And that would likely rattle markets even more.

There would also be an upside, however. One of the key market worries is rising rates, with the Fed widely expected to start tapering its bond purchases by the end of the year. A weak jobs report would reduce the chances of that, and markets would likely cheer signs of continued monetary stimulus. From an economic standpoint, a report under 400,000 new jobs would be a sign of worry. From a market perspective, however, while it would likely create some volatility, it could turn into a source of longer-term support.

Personally, I expect the job number to come in around as expected, somewhere between 500,000 and 600,000. As long as the country remains open, the economic damage has been muted, and the medical damage has likely already been done. I don’t expect this report to be real news.

But I am prepared for policy consequences if it comes in weak. Watch markets for short-term volatility. Watch the Fed for signs it is pulling back on stimulus reductions.

And then watch the jobs report for the following month. This is an important report, but not the most important one. There could be consequences, but they will pass. What matters are trends—and trends play out over more than one month.