The Hidden Hand of Inflation

One of the coolest talks I’ve ever seen at a conference was by a professional pickpocket named Apollo Robbins. (You can see his TED talk here.) Watching someone steal wallets, watches, and even glasses from people—on stage, in full view of everyone, and after warning the victim what was about to happen—redefined my idea of how our perceptions work.

The same concept underlies this basketball video. I won’t give any details, in case you haven’t seen it before, but it’s worth a look.

Both of these examples highlight inattentional blindness—a lack of attention to obvious things happening around us. It helps explain many of the “things we don’t know we don’t know,” as well as many of the “black swans” that hammer our portfolios.

Is inflation sneaking up on us?

A recent paper from AllianceBernstein presents an interesting possibility: that inflation is not only too low but is, in fact, poised to go much higher, much faster than anyone thinks.

I’m not fully behind this idea yet, but it’s worth some thought. There are signs that suggest the excessive focus on deflation due to factors like lower gas prices is misguided and dangerous.

Where inflation comes from. Here in the U.S., shelter, expressed as rents, is the largest component of living expenses by far, accounting for about 30 percent of the Consumer Price Index. Rents have increased faster than general price inflation, and they continue to do so at a rate of just above 3 percent, per the chart below. 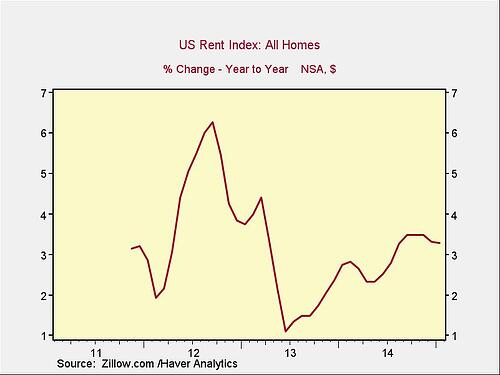 If rental rates keep increasing—which they should, for reasons we’ll discuss in a minute—then we can expect to see at least 1-percent inflation (30 percent of the CPI times 3 percent and a bit). We will not have deflation unless other components drop more than that. Consider this a baseline, against which everything else either adds or subtracts.

Rents have been increasing at a faster rate over the past 18 months and are poised to continue to do so as rental vacancy rates come down further. As you can see in the chart below, vacancy rates are at their lowest level since 1993. 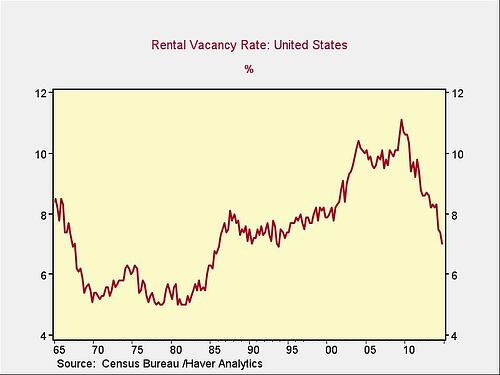 If we consider job creation in the 20–29 age bracket (the cohort that generates most new households), we see what is driving this uptick in rental demand. Young people increasingly have the income to move out on their own, a theme that should continue as the job market continues to heal.

Looking at 2015, there is a significant baked-in slice of inflation that is very probably going to increase. If rents increase 4 percent, at 30 percent of the CPI basket base, inflation would be 1.2 percent, or more than halfway toward the Fed’s target.

As for other major contributors, we will almost certainly see oil-price-related deflation go away at the end of 2015 when the year-on-year comparisons turn neutral or positive, as opposed to sharply negative, and energy is about 9 percent of the inflation index. Medical care and education (about 15 percent combined) can also be relied on to continue to grow above the general inflation rate.

Something to keep an eye on

Overall, more than half of the inflation basket is poised to rise—maybe significantly—through 2015. If wages start to grow faster, which they should, we may see more demand push inflation higher as well.

Bottom line: keep an eye on the hidden hand of inflation. Just because you can’t see it doesn’t mean it’s not about to pick your pocket.