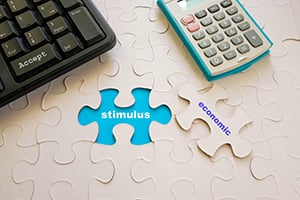 The economic news has continued to soften in recent days. December saw layoffs go up and the number of jobs decline, and, this morning, the retail sales numbers dropped. Consumer confidence has gone down. Clearly, the economic headwinds from the pandemic are getting worse.

The recent data is the context for a plan announced last night by the incoming president for a new round of federal stimulus. One of the big questions about the new administration has been what economic action it would take. This announcement is the first detailed look we have had. While the stimulus package is likely to be passed in a different form than currently proposed, it is worth taking a look simply because this plan represents how the administration would like to address the problem.

Will the Package Be Enough?

To start with, the stimulus proposal is big, at $1.9 trillion. This figure is almost as big as the amount of the initial stimulus bill of 2020, which was $2 trillion. It comes on top of the $900 billion package recently passed in December. The question is whether $1.9 trillion is enough to tide the economy over. Given that the initial package was effective for a period of six months and more, the answer is likely yes. This round of stimulus should help get the economy past the gap until vaccines bring the virus under control permanently.

Where Is the Money Going?

The next question is whether the money is going to the right places. The current proposal is for a means-tested $1,400 per-person check. On top of December’s $600 checks, this round of support will bring the recent per-person stimulus to the $2,000 level, matching the first round of 2020. While these checks will certainly hit those who don’t need them, they will also hit the vast majority of those who do. Again, the example is the first round of stimulus, which rescued consumer confidence and demand. A similar result will help a great deal in the short term.

Another piece of the Biden proposal is to increase the December additional unemployment supplement from $300 to $400 per week, extending the expiration date from March to September. This money is both targeted and supportive. It will cover not only short-term losses but should also continue to help recipients until the economy is back on track. This support, even more than the means-tested checks, will help both consumer confidence and spending.

Moving away from the consumer, the Biden plan also provides funding to reopen schools. This support is an underappreciated benefit to both workers and businesses, given that one of the constraints for employees is finding child care. The school funding will allow many workers back into the work force and will also be beneficial for children. Again, the support is targeted and effective.

Support for State and Local Governments

Finally, the proposal includes funding to federalize the COVID-19 testing and vaccination programs. In many cases, states have been struggling to get the vaccines out quickly. Federal funding should help accelerate the process, thereby limiting the costs of the other parts of the proposal. Getting the pandemic under control is a prerequisite for recovery, and this funding will help do that.

On the whole, the Biden proposal is a reasonable and helpful plan. It is both targeted and time-limited to the period it is likely to be needed. It will be funded by borrowing, but this is consistent with past practice. Given the current situation, it is also appropriate—just as the stimulus package was last year.