The Allure of Emerging Market Debt

Brad here. After looking at emerging market stock markets yesterday, it is a good time to discuss the debt markets there. Although stock markets usually get most of the attention, Nick Follett, manager of our fixed income team at Commonwealth, makes a compelling case that debt markets deserve a look as well. I think you’ll find that this post gets a bit further into the details than we normally do, but the relative unfamiliarity of the topic makes it both necessary and worthwhile. Enjoy!

With the MSCI Emerging Markets Index yielding 6.25 percent, it’s easy to see why investors find emerging market debt alluring. Global growth is hovering around 2 percent, and domestic yields are static or retreating. One of the few fixed income sectors with attractive yields is emerging markets. But yields are not necessarily an indicator of value. So, let’s take a deeper look at why you might want to invest in this asset class, as well as some common concerns.

Fixed income investing is a relative value proposition. With developed market yields on 10-year government bonds at 0.01 percent, 0.13 percent, and 2.68 percent for Japan, Germany, and the U.S., respectively, it’s difficult to meet an income need with such low-paying bonds. Even Italy, with its litany of problems, has a yield of only 2.84 percent. The comparative appeal of 4.7 percent, 8.4 percent, and 9.1 percent for Russia, Mexico, and Brazil, respectively, is obvious. But, of course, with this return comes some risk.

Or maybe we think about risk as uncertainty of returns. Using the most common volatility metric (standard deviation), over the past 10 years, emerging market debt has seen an average variation of 8.15 percent in returns compared with 7.13 percent for high-yield. Which is to say more variation, but not all that much. To be fair, there can be more idiosyncratic country-specific risk when investing in emerging markets, but there are ways to mitigate the negative impact. More on that in a bit.

Now that we’ve covered the potential value and risks, let’s take a deeper dive into what you might consider before investing in emerging market debt. 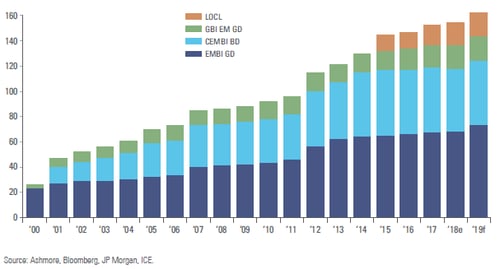 The first step in investing in emerging market debt is determining which market to use. As you can see in the chart above, we can understand this market as just four categories: sovereign or corporate issuers and local or hard currency (the dollar and euro being the two most popular). Due to the complexity of these indices, this is a useful perspective. The majority of strategies focus on external sovereign and corporate holdings. Typically, active management will have the ability to move between the two, whereas passive strategies will be tied to one specifically.

Second, you will need to evaluate the currency component. Using hard currency strategies will take out some, but not all, volatility. That said, all emerging market debt has some sensitivity to the value of the dollar.

The impact of the dollar

The chart below tracks the performance of the U.S. Dollar Index (which is used to indicate general international value of the U.S. dollar) and an emerging market debt exchange-traded fund often used as a proxy for the market at large. With an almost perfectly negative correlation, a strengthening dollar can have severe consequences on developing debt, for several reasons. As emerging markets as a set are net exporters, the inverse relationship between commodity prices and the dollar can cause a major headwind to the overall GDP (and, subsequently, bond yields) of these countries. 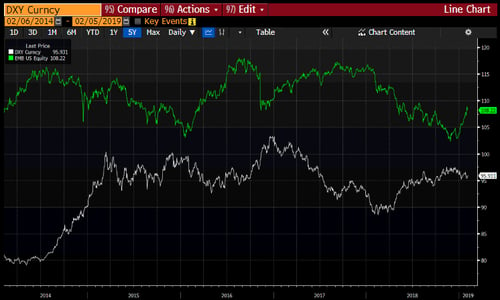 Second, many developing countries have inflation exceeding that of the funding country (the average inflation rate of emerging markets is 5.2 versus 1.9 for the G7). As such, the local currencies have diminished purchasing power against the lending money, making it ever more difficult for the borrowers to pay down their debt. If a rising tide lifts all boats, a weaker dollar buoys emerging market debt.

Know what you own

Emerging market debt can be a great way to increase the overall returns in a diversified portfolio. It can provide much of the gains of high-yield with a broader investable universe and provide entree into markets that have growth rates two or three times that of the developed world. As my colleague Peter Essele is prone to say, “There’s no such thing as bad funds, just funds used badly.” Emerging market debt perfectly encapsulates this mantra. It is to be used as an income kicker and in small amounts. That being said, it’s important to know what you own. You may already have exposure in your global bond strategy or even in your intermediate core-plus holding.

Ready for a new market?

Emerging market debt can be daunting. With holdings in countries that even the most seasoned traveler may have a hard time finding on a globe, the intellectual barrier to entry can be discouraging. But with “lower for longer” yields in developed markets, now may be the right time to crack open a map and look at some new markets.

Standard deviation is the dispersion of a set of returns from its mean. It shows the spread of an investment’s returns (positive and negative) over time and is commonly used to gauge potential volatility or risk. The greater the degree of dispersion, the greater the risk.

The MSCI Emerging Markets Index is a market capitalization-weighted index composed of companies representative of the market structure of 26 emerging market countries in Europe, Latin America, and the Pacific Basin. It excludes closed markets and those shares in otherwise free markets that are not purchasable by foreigners.