Are Emerging Markets Too Risky?

Brad here. One of the questions I’ve been getting recently has been whether international markets still make sense, with particular concerns around whether they are too risky. Anu Gaggar, our international analyst, makes a strong case that emerging markets still make sense—in many more ways now than in years past. I think she raises some excellent points and makes a strong case. Enjoy!

Emerging market equities are notorious for their volatility—and rightfully so. Compared with that of U.S. equities, the ride for emerging market equities is generally bumpier. So, if the U.S. is on the last lap of its current economic cycle, it would be prudent for investors to position themselves defensively and stay away from emerging market equities, right? Indeed, for U.S. investors, there is a sense of safety in staying close to home, especially when the going gets tough. But a global investor needs to keep an eye on the longer-term trends and take advantage of intermittent windows of opportunity.

After a very strong 2017, emerging markets went quickly out of favor in 2018 as Fed rate hikes, trade war fears, China slowdown worries, and political uncertainty in several emerging market countries weighed on sentiment. It is true that several emerging countries are highly levered to global growth and global trade. If not dependent on external trade, they are dependent on external financing. Thus, a decline in oil prices hurt the energy complex, while a strong dollar led to balance sheet stress for heavily indebted emerging countries like Turkey and Argentina. But the sharp sell-off has resulted in emerging market equities being priced quite attractively on an absolute and relative basis. 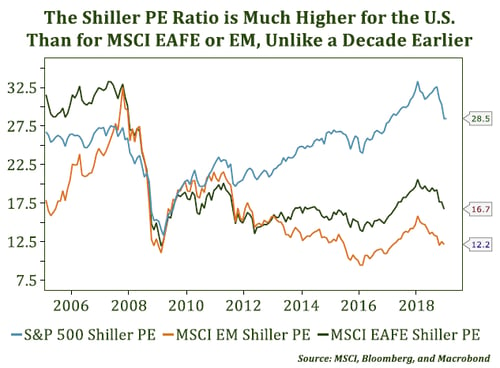 Attractive valuation makes a very strong case for investing for the long term. Further, the current valuation implies that the market has priced in a dire outlook for the asset class, and there is potentially less downside going forward. In fact, by some measures of investor sentiment, emerging market risk aversion fell into panic territory by the end of last year—a level that has historically acted as a bullish signal for subsequent market performance.

If we consider the experience of investors in the past three U.S. economic recessions, emerging market equities have generally held up better than U.S. equities in the periods preceding those recessions. Of course, it should be noted that we have had only three recessionary periods in the past three decades in the U.S.; hence, the data is limited and likely does not have much statistical significance.

Plus, we are seeing signs of relative strength for emerging market equities. After a period of underperformance that saw the MSCI Emerging Markets Index down nearly 19 percent against the S&P 500 and 10 percent compared with the MSCI EAFE Index from late January to early October 2018, the MSCI Emerging Markets Index has managed to outperform the S&P 500 by 9 percent and the MSCI EAFE Index by 11 percent in the four months since October 11, 2018. 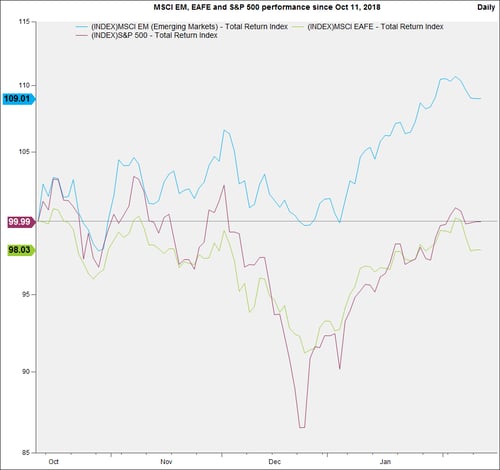 Despite the strength in the U.S. dollar seen in the past couple of weeks, there are increasing signs of potential vulnerability. A pause in the rate hike cycle, along with crowded dollar positions, is likely to cause investors to reassess their outlook for the U.S. dollar. As was evidenced last year, emerging market equities tend to struggle during periods of U.S. dollar strength. Thus, if the dollar begins to lose ground, it could be a positive catalyst for emerging market equities.

There are risks, of course

None of this is to say that the risks have receded entirely. Investor sentiment in emerging market equities could quickly turn negative if the widely anticipated trade truce between the U.S. and China does not materialize. Plus, if the Fed resumes rate hikes as it sees sustained signs of inflation and labor market tightness in the U.S. economy, it could lead to another bout of dollar strength and emerging market weakness. Finally, if China’s latest stimulus measures fail to have the expected impact on an already debt-laden economy, China’s slowdown could be more protracted than expected, with spillover effects on the rest of the emerging market landscape.

So, are emerging markets too risky?

Overall, the prospects for emerging markets remain positive, and investors would be well advised to consider allocating there. Although there are risks, the same can be said for the U.S. And if the U.S. does stumble? Emerging markets might be well positioned to pick up some of the slack.