Brad here. Besides being an economics geek, I am and always have been a science and space geek. As a human, I regard the growing presence of private enterprise in space as a significant breakthrough. As an investor, I’m more than excited by the opportunities presented by exploring space. On the other hand, as a cynic, I’m also very aware of the risks and concerns associated with expanding our boundaries. Tom Ryan of Commonwealth’s Investment Management and Research department does a terrific job outlining the real opportunities, as well as the risks, of investing in the final frontier. Thanks, Tom—ad astra!

When we talk about “space economics,” we’re not referring to storage or buildings but, rather, to outer space. Given the pace of recent developments in the space sector, it’s arguably the next game-changing frontier in investing. But is it a short-term play or a long-term necessity for our planet? Earth has a finite amount of resources to fuel growth. Once they’re depleted, we may find ourselves in an environmental collapse or economic plateau. To illuminate the issues at play, let’s look at what’s happening in the space sector.

Why go into space?

Companies are expanding into the space sector for many reasons. Some organizations use satellite communications to connect phones, provide GPS, and broadcast television. Others supply global military forces with a variety of warfare systems for air defense. Consequently, the asset infrastructures for these companies, whether in space or on the ground, are subject to cybervulnerabilities. The demand for cybersecurity has risen globally, which has led to the development of companies such as Elon Musk’s Space Exploration Technologies (known as SpaceX). And, of course, NASA has been exploring the universe for decades. (Since 2018, we’ve even had a Tesla Roadster floating around the sun.)

Looking to the stars and beyond, we can find all of the commodities, land, and resources we need to fuel economic growth. Space provides an apparently infinite supply of materials and energy that enterprises can use to build and expand, with less carbon emissions and environmental concerns than are involved in terrestrial capitalism. As we all know, environmental concerns are steadily growing throughout the investment community, providing significant challenges to companies looking to be both profitable and ethical. The fact that environmental regulations are lower for the regions beyond our atmosphere generally means higher profitability for space-related businesses. This profitability provides a direct incentive for companies to expand into the space industry.

The drivers for space economics are capitalism and entrepreneurship, which we’re seeing in many forms. Private companies are starting to push technologies forward in an industry that was once predominantly run by government contracts. Blue Origin, a company owned by Amazon founder Jeff Bezos, is dedicated to creating a reusable, cost-effective infrastructure for space travel. The aforementioned SpaceX was established to manufacture and launch advanced rockets and spacecraft, with the ultimate goal of enabling travel to other planets. Sir Richard Branson’s Virgin Galactic has been testing space travel in the hopes of jump-starting the space tourism industry. The giant leaps made by these companies have been fueled by entrepreneurial creativity and the recycling of technology and research products owned by NASA and other government agencies. In turn, governments are becoming more involved in scrutinizing space-related corporations for both regulatory and security reasons.

After procuring efficient and reliable transportation to space, the next challenge is the transport of materials. If we can develop inexpensive methods of taking materials into space, the necessary infrastructure will get much easier to build. For example, a bottle of whiskey that costs $100 on Earth (a good bottle) costs around $16,000 in space. Even a simple bottle of water costs around $10,000 on the International Space Station. These astronomical increases in price are the result of the costs of the rockets, fuel, and launch operations necessary to transport items to space.

If a less expensive or more efficient fuel source can be found or a different method of getting into space is discovered, space development will become easier. Already, newer rockets can be reused because they land on Earth after deploying their payload, which directly lowers the cost of space transportation. In turn, lower costs enable telecom companies to launch more satellites that can provide faster communication speeds (such as 5G) or more reliable services. Ultimately, advances like these will increase the range of travel for astronauts or private expedition companies. Inexpensive space travel technology will be the catalyst for an explosion of growth.

In 2019, the U.S. government founded the U.S. Space Force, a branch of the armed forces dedicated to protecting American assets above our atmosphere and expanding our influence into space. Typically, U.S. armed forces are deployed in areas containing valuable commodities or strategic resources. Think of the Middle East with its valuable oil fields or the Strait of Hormuz, a vital shipping lane for U.S. goods. Additionally, U.S. entrepreneurs are currently investing capital in the pursuit of riches to be gained from endeavors such as space tourism or mining asteroids for precious materials. These businesses will need to be protected, and our government is preparing to do so.

Russia and China are also building military space programs, with Russia being the furthest along, having started its program during the Cold War. In the past, Russia has paused its space programs, but it has resumed operations during the current resurgence of space exploration. Here in the U.S., we need to protect the Achilles heel of our military—the satellites that connect our military assets—and the atmosphere above North America. This initiative should proceed in conjunction with protecting the space infrastructure of private companies.

Defense contractors will supply the U.S. Space Force, along with private companies (e.g., Blue Origin and SpaceX) and public corporations (e.g., Boeing, Northrop Grumman, and Lockheed Martin). Satellite and component producers such as Maxar Technologies and Globalstar, spaceship producers such as Virgin Galactic, GPS and geospatial specialists such as Trimble or Garmin, and even television companies such as DISH Network will be involved in this new frontier.

In addition, we’re starting to see funds and ETFs move into this space, as well as the development of indices to track the performance of space industry equities. The new S-Network Space Index* pulls both pure-play and diversified space investments such as Boeing and AT&T. (A pure play is a company that focuses on a single type of product or service.) The pure-play tranche (see the chart below) makes up 80 percent of the index. It comprises smaller companies with an average market cap of $6.51 billion. Due to reduced diversification, this type of index comes with higher risk and volatility. 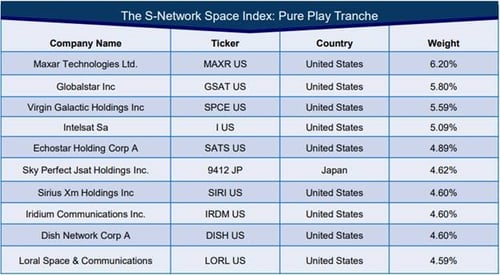 The diversified tranche (see chart below), which includes mostly large-cap names with an average market cap of $95.5 billion, may exhibit less volatility because of its more diversified business segment split. Some of these companies were the same ones that helped build the Apollo 11 spaceship, which landed men on the moon in July 1969. This list includes Northrop Grumman, Lockheed Martin, and Boeing.

Currently, the largest portion of space-related revenues come from the communications sector. Geographically, U.S. companies maintain the largest weight within the space frontier. But we should note that industrial and IT companies are a growing part of the mix. As of May 2019, the Satellite Industry Association reported that the global space economy was worth $360 billion in 2018. This estimate includes only satellite companies and government space budgets, however. According to SpaceNews, it would likely be much higher if more constituents were included.

Coming down to earth

Space capitalism is in its beginning stages, so some time may need to pass before we can drill on asteroids for precious materials or obtain fuel from distant planets. Still, these developments may arrive down the road, so investors may wish to start thinking about the potential opportunities. Of course, considering the real risks is also critical. The high costs of space exploration and the unproven status of technology for exploring space must be evaluated along with the opportunities. We don’t know whether expanding into space could potentially save our world from planetary exhaustion. Taking a long-term view, however, it’s possible that the most environmentally friendly form of investing could be off-planet investing.

*The S-Network Space Index tracks a portfolio of companies that derive substantial revenue from space-related activities. The SPACE Index is designed to serve as an equity benchmark for globally traded stocks that are materially engaged in the space industry.

The information in this commentary is intended for informational/educational purposes only and should not be construed as investment advice, a solicitation, or a recommendation to buy or sell any security or investment product. Please contact your financial professional for more information specific to your situation.