Should We Worry About Stagflation? 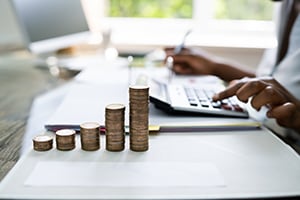 Following up on yesterday’s piece on inflation, I wanted to dig deeper into another topic I’ve been hearing about recently: stagflation. When people look at inflation and the fears of slower growth, the idea of stagflation comes back to life from the 1970s and 1980s. But that was a long time ago when few of us were paying attention to economics. So it’s worth going back to basics and thinking about what stagflation is before we start to worry too much.

Per Wikipedia, stagflation is defined as “. . . a situation in which the inflation rate is high, the economic growth rate slows, and unemployment remains steadily high. It presents a dilemma for economic policy, since actions intended to lower inflation may exacerbate unemployment.”

This is an excellent definition that captures the three main things we need to watch. The question is, is this what we’re seeing now?

Let’s look at each piece. First, is the inflation rate high? Yes, there’s no doubt about that. Second, is the economic growth rate slowing? Maybe. It is certainly possible, but we haven’t seen it yet. And even if growth slows from the fast pace of recent quarters, it can still be at a decent level. Third, is unemployment steadily high? Here, the answer is an unequivocal “no.” The job market is still very hot, and massive job openings and voluntary quits are still close to record levels.

So when we look at the underlying conditions, we do not meet the definition of stagflation. But, as noted, conditions have changed quite a bit since the term was coined in the 1970s. So let’s dig a little deeper by looking at the causes of stagflation.

The Causes of Stagflation

As with so much in economics, we don’t know the exact reasons—and much of the analysis depends on the political views of the analyst. So, once again, I’m going to pull from Wikipedia, which shares two primary reasons, as a starting point:

Supply shock. A supply shock, such as a sudden and sharp increase in oil prices, can cause stagflation. “An unfavorable situation like that tends to raise prices at the same time as it slows economic growth by making production more costly and less profitable.”

When you look at the underlying causes, stagflation looks much more likely, and the headlines make sense, too. It also aligns with the economic and political preconceptions of many analysts. There has been a supply shock, first from the supply chain issues of the pandemic and now from rising oil prices. Additionally, there has been a significant increase in the money supply, with both the Fed and the federal government stimulating the economy to keep it alive during the pandemic. Per the 1970s definition, we certainly should be experiencing stagflation. Given those causes, we should actually be a couple of years into it. But the fact is, we are not.

Strong growth. Growth has been surprisingly strong over the past two years despite the supply shock and the high levels of fiscal and monetary stimulus. Employment has been even stronger. If those were the reasons, we would be in much worse shape today. So something must have changed from the 1970s to make today’s economy different from what it was back then.

An economic shift. The most obvious difference is that the U.S. economy is much less dependent on energy as a whole and foreign energy in particular. That alone largely eliminates one potential risk factor. Second, we have shifted to a service-based economy, which is less affected by stagflation factors than the 1970s economy. We now have a more flexible, more independent economy—one that can respond to difficult conditions without the kind of systemic seizure that leads to stagflation.

Will that economic agility last? It’s hard to tell. If oil prices stay high for a long time, that will certainly be a drag on the economy. If growth slows, that will bring us closer to something like stagflation. But as long as the job market remains strong, we will have the economic momentum to keep us out of the 1970s trap. And that means the immediate risk is still small despite the current high inflation.

There are also reasons to believe that inflation will come back down again, as I outlined yesterday. As supply chains normalize and U.S. energy production ramps up, lower inflation will combine to bring growth back up. And, with a very strong job market, consumers—by far the largest part of the economy—will be able to keep spending and driving the economy forward. We are still far from entering 1970s-style stagflation, and the conditions are such that we probably won’t.

And that is why I am not worried about stagflation yet. Could it happen? Yes. Has it happened yet? No. Will it happen? Certainly not this year and, likely, not at all.