Should We Be Worried About the Chinese Currency? 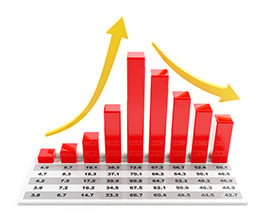 After the pullback in the first quarter of the year, followed by the Brexit collapse and quick recovery, it seems as if the market has pretty much decided to head up. With U.S. markets at all-time highs and earnings coming in better than expected so far, it seems quite likely we will see continued appreciation.

That said, we also need to start thinking about what could potentially bring the stock market's updward climb to an end.

A reader recently asked whether we should be worried about the Chinese currency depreciation, and that seems like a great place to start. The yuan has indeed been depreciating. The white line in the chart below shows the consistency of the drop over the past year. 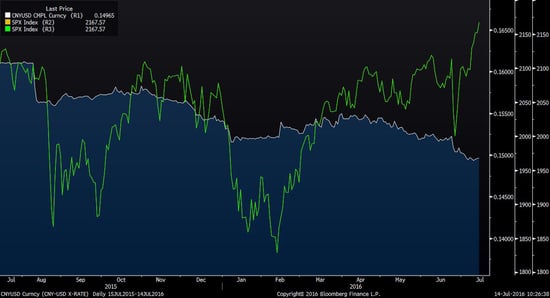 Looking a bit more closely, we can see that sudden drops in the yuan’s value have been associated with drops in the S&P 500 (the green line). This happened in July of last year, in December/January, and in late June (although that instance was probably more about Brexit).

Given that the yuan continues to depreciate and that sharp drops can affect the U.S. markets, it appears that some worry is warranted.

On the other hand, the chart covers a period during which the U.S. market was moving back and forth, without any significant trends. The most recent data, which shows U.S. markets rising even as the yuan remains cheap, suggests there’s not necessarily a causal relationship. From a fundamental standpoint, the exposure of U.S. companies to China is relatively limited, so that would make sense. The connection appears to be related more to the macroeconomic risks a weak Chinese currency would be signaling, rather than to a direct effect on U.S. companies.

Looking over a longer time period, the relationship is also less clear. Over the past five years, the yuan has seen periods of both appreciation and depreciation against the dollar, while the S&P 500 has appreciated spectacularly. Steady changes have not meaningfully hurt stock performance, but sudden changes have.

Slow and steady change is the key

As long as the Chinese government manages its currency for gradual changes, rather than sudden ones, there doesn’t seem to be a reason that U.S. stocks should be negatively affected. As of now, the ongoing yuan depreciation has been reasonably slow and consistent, and markets do not seem rattled. The real question is when, whether, and why a sudden devaluation of the yuan against the dollar might hit.

Given the damage the last couple of rapid drops caused, in China as well as in U.S. markets, it is not in the Chinese government’s interest to allow another such decline. Its leaders seem to realize this and have instituted changes to make such a drop less likely, in addition to managing the currency more consistently. The fact that we didn't see disruption during the Brexit turmoil is a good sign.

As something to worry about, the Chinese currency probably isn't a short-term problem. At some point, continued depreciation may well have an impact here in the U.S., but it will probably play out indirectly, through the general economy and effects on corporate earnings, rather than as a direct shock to the market. In other words, it’s something to keep an eye on but not worry about too much.