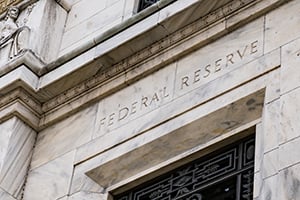 A lot has happened since the borrowing rate for cash flared up in September, including some possible reasons, potential solutions, and a probable repeat. Let’s look at what happened, what could have happened, where we are, and where we go from here.

Last September, we wrote about the Fed’s jump into the cash markets. To recap, the overnight borrowing rate for cash spiked in September from about 2 percent to 10 percent. The initial blame was placed on a dislocation in supply and demand dynamics, which was exacerbated by central bank reserves being too low. Namely, the 2018 corporate tax bill and a Treasury auction settlement date put excess stress on the Fed’s already shrinking balance sheet. Consequently, the Open Market Operations division of the New York Fed jumped into the repo markets and infused the system with liquidity. This move, in turn, prompted headline after headline with more questions than answers, including “what happens next time?”

The next time: December 16

If the cash crunch in September was truly the result of the tax bill and Treasury auctions causing a surge in need, it seemed the next time it happened would be a good test of whether the Fed’s overabundance of supply served its purpose and assuaged the market. As it turned out, this was exactly the confluence of events that lined up on December 16, 2019. During that time, the effective federal funds rate—or the range at which one borrows cash (in essence, the repo rate)—was between 1.5 percent and 1.75 percent. On that Monday in December, the market opened at 1.70 percent and quickly settled in around 1.60 percent: right in line with where it “should” be given normal conditions. The Fed’s actions were working.

Unlike in September, when the Fed was accused of being caught asleep at the wheel, the Fed jumped in with overwhelming force and continually increased its lending operations through year-end, up to $490 billion. This jump included a new offering of longer-dated loans rather than the typical overnight terms. What is particularly interesting here is the demand difference between the two types of loans:

The overwhelming appeal for month-long cash (insurance) and the underwhelming need for overnight cash (emergency) suggest that the complacency experienced in September has been mostly taken out of the market.

The next possible catalyst for a cash shortage was year-end liquidity needs at a time when the lending rate seasonally increases. Leading into the final day of the decade, the Fed’s increased offerings were mostly undersubscribed, with participants taking only a small portion of the $490 billion offered, suggesting there was sufficient liquidity to meet the needs of borrowers.

Since the start of the new year, most of the overnight auctions have been undersubscribed or only slightly elevated, with most of the longer-term loans winding down.

The Fed has put a lot of time and effort—not to mention money—into staving off any major year-end turmoil in the repo markets. Still, the question remains: Where do we go from here? To answer that, we need to look at two distinct components: the uniquely public nature of Fed policy action and the factors that led to the initial disruption in the funding markets.

With respect to the Fed, Vice Chairman Richard Clarida has been explicit and mentioned that the bank will continue interventions at least through April, when tax payments will reduce levels of cash in the system. The Fed also started to increase the balance sheet in October to “get reserves up to the ample level. Once we get to that point, certainly we would not be expecting to have ongoing large repo operations as necessary.” In essence, the Fed is looking to address the market conditions that preceded the September spike in rates.

So, the Fed is likely to stay in the liquidity market until the increased balance sheet can add some slack. But that strategy may not stabilize the systemic issues if the Fed decides to reverse its monetary policy and tighten again. Some of the permanent fixes bandied about include increasing the types of securities the Fed can purchase for reserve management and creating a “standing repo” facility. These solutions would allow the Fed to stay in the market permanently and supplement other financial lenders. To be clear, these ideas are in their nascent state—and any sort of solution is likely to take time to unfold.

What to watch for

The Fed’s exit ramp will likely be telegraphed in one of two ways. The most easily recognizable one is the size of the offering. If the Fed thinks that there’s sufficient funding available, it will start lowering the offered amount. This strategy is exactly the opposite of what the Fed did in the fall when it tried to instill confidence in the market by showing its willingness to respond with an overwhelming force. The second and slightly more difficult signal to track is the borrowing rate. As of this writing, the rate to borrow from the Fed is the same as rate to borrow from the market. If the Fed wants to disincentivize its participation, it could simply raise the cost to borrow directly from the Fed.

As we wrote in September, this situation sounds scary, but the main actors seem to have heeded the call to action. The Fed has jumped in as a major lender to the funding markets, and the borrowers have taken the longer view on their liquidity needs. Further, solutions have been proposed that may prevent this scenario from happening again. It’s certainly something we will be keeping an eye on. But for now, the markets seemed to have calmed.