Much of the commentary on recent issues—especially inflation—has focused on terrible reported numbers. As always, though, it is helpful to remember there is nothing sacred about those numbers. They have assumptions and biases built in, which are unavoidable. As analysts, we need to understand those assumptions and biases, so we can see when they are reasonable (and when they are not).

This perspective is relevant right now, as most of the statistics reported are looking back to the start of the pandemic (i.e., when everything was crashing) and comparing them with the present (i.e., when the reopening is proceeding apace). In other words, annual comparisons, which are designed to capture a standard time period, are very much not looking at a standard time period. To be sure, the past 12 months have been anything but standard.

Is there a way to meaningfully understand what is going on, despite the ups and downs of the past year? I think so: simply take the pandemic, with its collapse and rebound, and treat it as one time period. By comparing the beginning and the end, we will know where we started and where we wound up.

This is easier said than done, of course. When did the pandemic start—and when will it end? We don’t fully know when the end will be. But if we go back to normal before the start of the pandemic and bring it to now, we can at least come up with some useful comparisons. In other words, rather than using a one-year period, let’s go to a longer time period that captures that time frame: the past two years.

Let’s start with inflation, which is the most prominent of those one-year stats. The chart below shows one-year inflation (the dark line) and two-year inflation (the light line). When you look at one year, the most recent number is a 4+ percent increase, which has been generating all those headlines. But when you look at the two-year inflation number? It is virtually the same. Yes, we got more inflation in the past 12 months, but that only caught up with the very low inflation we saw during the pandemic. The two-year period accurately captures both the downturn and the upturn. It shows that if we account for both, things are not nearly as bad as the one-year number would suggest. It shows that inflation, over the pandemic, is actually pretty normal. 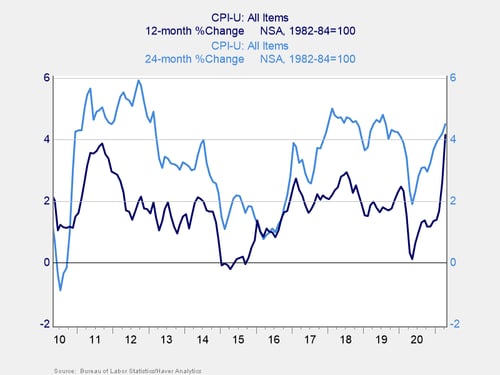 We can take some other things from the analysis as well. Normally, two-year inflation runs around 2 percent to 6 percent, with an average of around 4 percent, which is where we are right now. Also, normally, there is a gap between one- and two-year inflation. We’re not seeing that gap right now. Both these stats illustrate how abnormal the past year has been but also how, after adjusting for an appropriate time period, the overall picture is not abnormal at all.

What About the S&P?

The process works both ways, of course. If inflation is not as bad as it looks on a one-year basis, some stats are not as good as they look on that same basis. Let's see what happens if we examine a very different data series: the S&P 500 Index. 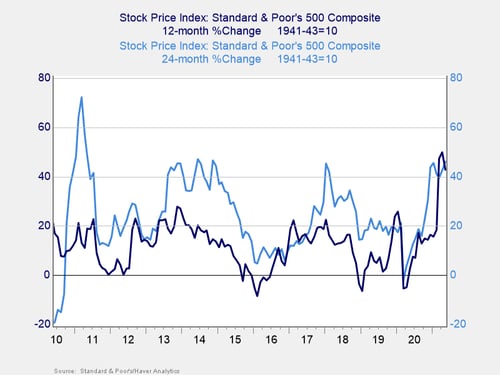 Here, too, we can make some useful observations. The two-year appreciation is usually well above the one year, but it’s not this time. This time, there was an early decline from the first part of the pandemic offset by strong gains in the past year. So, the one- and two-year gains are almost identical. One-year gains ran between 0 percent and 20 percent during this time, so the current one-year gain is well above that range. But the two-year gains ran between 20 percent and 40 percent; again, for two years, we are within the normal range. This is the same picture we saw with the inflation numbers and illustrates, again, that a two-year time span is a much better way to capture and compare the economic and market bungee jump of the past year.

There are other statistics I could use to make the point, but you get the idea. Too many times, the media presents a raw number without understanding or context. Unusual times, which we are certainly in, demand more understanding and may demand unusual statistics. Right now, the two-year numbers are a more reliable indicator.