I am running this post a day earlier than usual, as we will post the beginning-of-the-month fare tomorrow (e.g., Market Thoughts video). Next week, we will go back to a Thursday update.

On the medical front, the news is still mixed. The pandemic remains under control, and the case growth rate remains low. But this past week has seen case growth start to tick up again on a seven-day average basis, as post-Labor Day infections start to register and as schools and universities reopen. Case growth in many states is showing increases, indicating this may be a growing problem.

At the national level, as of September 29, the daily spread rate is 0.6 percent per day, the same as the previous week. During the week, however, we did see that rate increase on several days. Because of this, the seven-day average of the daily number of new cases has increased to 42,800, up from just over 41,000 last week, and back to the levels of late August. While case growth remains below July levels, the numbers continue to creep up. The increase is still fairly slow, but it has been consistent over the past two weeks. It is a clear sign that risks may rise further over the next couple of weeks.

The testing news was better, as the number of tests has continued to trend up, although it remains quite variable. As testing levels continue to increase, we look to be getting closer to adequate levels. The fact that the positive testing rate has continued to decline and is now around and even below the recommended maximum of 5 percent suggests that we are getting close to the testing level sufficient at the moment to keep the virus under control.

Beyond the headline numbers, state-level data is worsening, as multiple states are showing rising infection rates. The breadth of faster infection growth and rising case rates show that national risks, while still under control, are rising.

While the medical risks are back in play, the economic recovery has been better. Consumer confidence and spending, an area of concern, have shown better data, which is encouraging. Financial markets have also ticked up, with a substantial recovery since the drop at the start of the month. Let’s take a look at the details.

Growth rate. The daily case growth rate stayed steady last week, ending the reporting period at 0.6 percent per day, the same as the previous week. While this was good news, we also saw a spike during the week, and overall the spread rate was higher than the previous week. The upward variability in the spread rate suggests that the medical effects of the Labor Day gatherings, as well as school and university reopenings, may be starting to show up.

Positive test results. As the case growth rate has shown signs of rising again, testing has also started to trend up, although it remains variable. The positive rate on tests remains around 5 percent, which is close to an acceptable level. If we look at the percentage of each day’s tests that are positive, lower numbers are better, as we want to be testing everyone and not just those who are obviously sick. The World Health Organization recommends a target of 5 percent or lower, which we are now achieving. One potential positive result of the increased testing is that some of the increased case growth may be due to better testing, although that remains to be seen.

New cases per day. The most obvious metric for tracking the virus is daily new cases. Here, we see more signs that Labor Day gatherings, as well as school and university reopenings, have started to increase viral spread. The seven-day average number of new cases per day rose from just over 41,000 per day last week to just over 42,800 per day. This is the second week in a row we have seen this increase, and the new case rate is now back to levels seen at the end of August—a reversal of the improvement seen in previous weeks. This is a sign of rising risks and will need to be watched.

Overall, the pandemic remains under control at the national level, although we are seeing signs of increased viral spread. At the state level, the health emergencies have largely passed, although concerns are growing in many states. The good news here is that even with the rising infection rates, we still largely have the virus under control at the national level, but the state-level risks are rising.

Looking forward, the question is whether current conditions will continue into the fall. As noted above, the recent Labor Day gatherings, combined with the ongoing reopening of school districts and universities, look to have increased the infection rate based on the most recent data. Given the lags between infection and detection, we still have several weeks to go before the full effect will be seen, so the risks remain material. These will be something we need to watch.

Consumer economy. The economic news has shown signs of improvement. While the job market continues to show slower improvement, the effects on consumer confidence and spending are becoming less apparent. Consumer confidence has bounced off of post-pandemic lows, and consumer spending has returned to a positive trend, after signs of a reversal. While these metrics remain something to watch, this improvement does suggest the effect of the expiration of expanded federal unemployment benefits may not slow the recovery as much as feared. 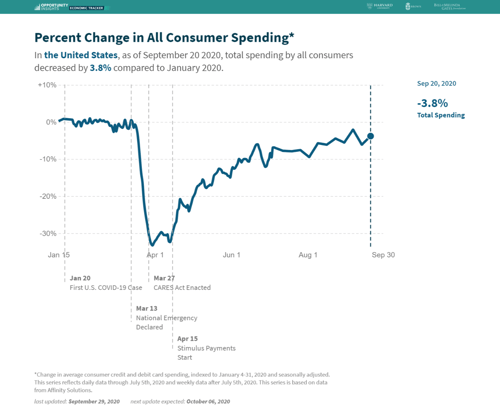 Business sector. On top of the signs of improvement in the consumer economy, the business sector continues to do well. Business confidence and investment are largely back to pre-pandemic levels, and specific higher-frequency indicators are showing improvement in many cases, as we can see in this composite of many indicators from J. P. Morgan. 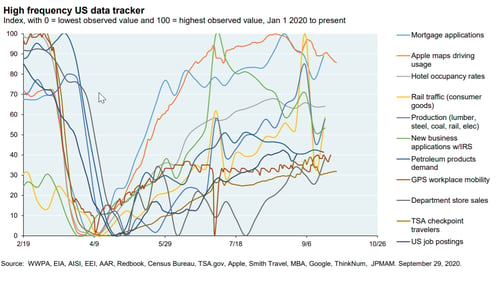 The big picture is that, despite the rise in the medical risks, the recovery is still on track. Still, consumer spending, at more than two-thirds of the economy, may be at risk despite recent improvements. While this risk is offset by strong business sentiment, it will bear watching.

Financial markets have rallied since the start of the month, despite the growing worries about rising medical risks. Given the data we reviewed above, those doubts seem reasonable, which suggests we might see more volatility ahead despite the improvement since the start of the month. That said, the fact that both the medical and economic risks are still relatively low should continue to provide support.

The real news this week is that the pandemic remains under control, although medical risks are starting to rise again. The effects of the Labor Day exposures and school reopenings are starting to appear in the data, and we have a couple of more weeks to go until the full effects will be apparent. With the data so far showing signs of rising risk, it will need to be watched.

The economic risks are also real. Despite recent positive news, we do see some slowing in the recovery. That will also need to be watched, especially if the medical risks rise. But at the moment, the recovery continues, and there is a real possibility it will accelerate again if the medical risks remain constrained or, especially, if another federal income support program is passed. The risks are real, but so are the opportunities.

Finally, markets continue to be turbulent as investors process the different risks, and more volatility is quite possible. But the fact that, as of now, the medical risks remain contained and the economic recovery continues has brought markets back and should continue to provide support.

Given all of this, over the next couple of weeks, the most likely case appears to be some deterioration of the medical news (although likely to a limited degree) and continued slow improvement on the economic fronts. There are certainly risks coming into focus, and we need to be aware of them. But for the moment, the news remains positive.