Positive Medical and Economic Trends Continue in May 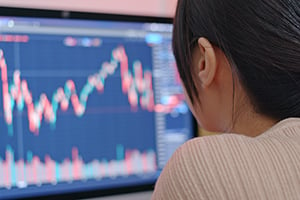 Things kept getting better in May, after a turnaround in April when what looked like a possible fourth wave crested and broke. But May saw continued declines in new cases, deaths, positive test rates, and all other metrics, and it ended with conditions at their best since last summer. The one snag during the month was that the vaccination rate continued to slow. Despite that slowing, vaccinations are increasing and have now hit a substantial part of the population, enough to have controlled the virus. This is significant progress and means the medical risks are low and likely to decline further over the next month.

The economic news is more mixed. While the economy continues to normalize and grow, job growth in April was reported to have dropped off sharply, which raised concerns about the sustainability of that growth. While this was likely a blip, as other data such as layoffs continued to get better, it did raise concerns. Similarly, while business confidence remained high, it pulled back a bit. Although manufacturing continues to be strong, supply chain issues are starting to bite. Growth continues, but there are signs it may be slowing.

Nevertheless, for both medical and economic risks, we remain at perhaps the most positive point since the start of the pandemic, and the trends are for even more improvement. Markets are clearly on board with the news, as they remain close to all-time highs. Plus, with corporate earnings blowing away expectations, there may well be more upside ahead. Let’s take a look at the details.

Case Growth Back to Levels of Last Summer

New cases per day. The most obvious metric for tracking the virus is daily new cases. Case growth has continued its steady decline in the past month. At this point, another infection wave looks unlikely, and the risks are dropping by the day.

New daily infection rates were 24,393 on May 27, down from 59,564 four weeks earlier, a decline of almost 60 percent. The seven-day average number of new cases per day was 23,060, down from 54,981 four weeks ago, a decline of almost 60 percent. Case growth is now at levels we saw last summer and is still going down. If this continues, we could be at pandemic-low case growth rates in a matter of weeks. 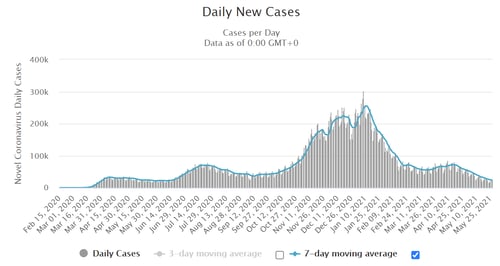 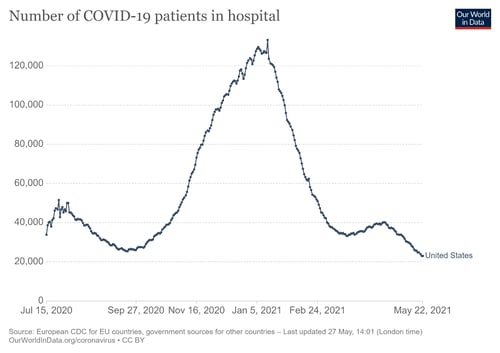 Testing news. The testing news is also much better. Overall testing numbers have continued to decline, which is reasonable given the sharp decline in the number of cases. The positive test rate has dropped sharply and is now at the lowest level of the pandemic, at 2.3 percent, down from 4 percent four weeks ago. While we would benefit from more testing, the decline and low level of positive testing rates are supporting evidence that the improvement in the other data is real and could be a leading indicator that the medical risks remain contained. 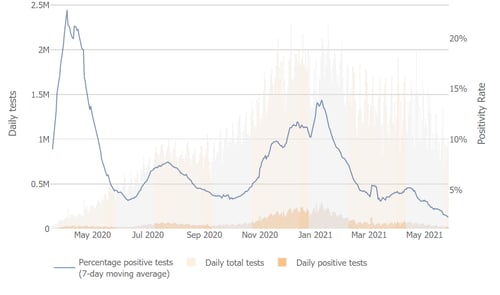 Vaccinations. All of these improvements are due to the success of the vaccination rollout. Almost half of the U.S. population has had at least one dose of the vaccine, and 40 percent are fully vaccinated. This has very likely helped contain the number of new infections and has certainly helped keep hospitalizations low. One emerging area of concern is that the vaccination rate is slowing. If that trend continues, it will delay the onset of herd immunity. As of now, it is very possible that we could be at herd immunity by the end of the summer, but that is now at risk.

That said, we do seem to have hit containment levels nationally, and herd immunity in many states is now within reach. The bottom line is that infection growth now looks to be controlled and is likely to decline further. While we need to keep an eye on vaccination rates, the trends remain very positive, and we will likely see further improvement over the next month.

Economy Improves in May But Shows Signs of Slowing

The economic data continues to get better overall, although there were signs of slowing. April job growth, in particular, came in much weaker than expected, dropping from 916,000 jobs added in March to 266,000 in April. While this was likely due to a statistical quirk in adjustments, it did raise concerns, although these were alleviated as layoffs continued to decline during the month. Consumer confidence also pulled back a bit. On the business side, confidence also softened, although it is still at high levels, and supply chain concerns raised inflation costs and risks.

Overall, however, the reopening continues and growth remains strong. Many of the problems we do observe are problems of success—the kind of problems we want to have. And, as employment continues to increase and supply chains to heal, we are very likely through the worst of the economic impact of the pandemic.

Markets saw more new all-time highs last month, supported by the good news on the medical and economic fronts, as well as much better-than-expected corporate earnings reports. Since then, the stock market has bounced around, looking for the next set of good news, but it remains near those highs. With both vaccinations and growth continuing, there is likely support for current valuations and potentially more upside ahead.

Moving Toward the End

Conditions continued to improve in May, with medical risks continuing to recede and the economy moving forward. The concerns now are much more economic than medical, as we are through the worst of the risks of the pandemic. But even the economic risks are very moderate by recent standards at this point.

Markets continue to do well and may have some more upside ahead. Future gains will depend on further improvement, which while likely is not guaranteed, especially in the short term. Expect more volatility.

In the longer term, the major risks have changed from the severe and immediate (a fourth wave or a collapse in job creation) to the more distant and hypothetical (slowing vaccinations and how quickly we get back to full employment). This shift is good news, as it means the difference between whether we recover and get back to normal, and how quickly. Right now, the good news is that whether we recover seems to be resolved—we are. The better news is that the recovery still looks like it will happen within the next several months. This is a much better place than we were only a couple of months ago, and we continue to move toward the end of the pandemic.