Politics and the Market: How Worried Should We Be?

With politics heating up again—and the news from Washington driving scary headlines—I am getting more questions about what that turmoil could mean for the market. Will politics derail it? Will confidence be shaken? Should we be worried?

I can’t tell you how worried you should be about the politics of it. But from an economics and markets perspective, I can tell you that there really is no more reason to worry now than there was a month ago. In fact, recent data has improved even more, so there is probably less cause for concern. Let’s take a closer look.

The most immediate concern for many is the Brett Kavanaugh hearings. But the Supreme Court doesn’t set interest rates and doesn’t control either tax rates or spending. From an economic standpoint, especially over the next couple of quarters, the current conflagration simply doesn’t matter. Watch the earnings, not the hearings. Listen to what the Fed says, not what the politicians say.

Aside from the hearings, the political/economic news is good. The House passed a spending bill, with bipartisan support, to avert a pending government shutdown. Tax cuts continue to act as economic stimulus, as does the additional spending Congress recently authorized. The government actually is here to help the economy. While there will be long-term costs, the short-term benefits are substantial.

The Fed is also on board. In its statement yesterday, the word strong appeared several times. Further, in the press conference, Chair Powell clearly showed he feels optimistic about the economy. In other words, beyond the noise, the policy underpinnings remain solid.

This brings us to confidence. While the fundamentals remain sound, if either business or consumer confidence were shaken, that could certainly affect financial markets. So, could the current political turmoil shake that confidence? It certainly could; however, there are no signs that is happening.

Consumer confidence.  Consumer confidence, in fact, has ticked up to the highest level since 2000 and has consistently increased since the presidential election. The latest turmoil is really nothing new, and consumers have grown steadily more confident over time. 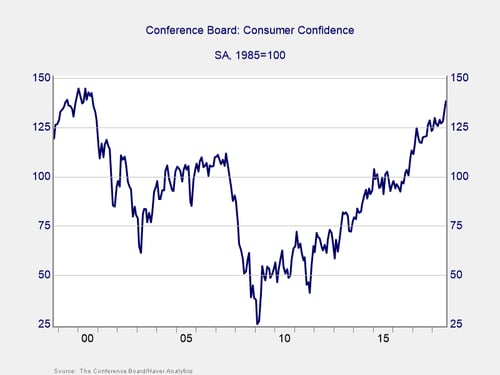 Business confidence. We can see the same trend with business confidence, which remains above the levels of 2000 and close to the peaks of the mid-2000s. We have seen some temporary pullbacks, but business sentiment remains fully in expansionary mode. No confidence problem here. 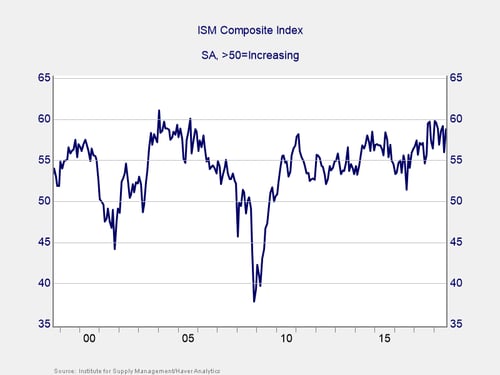 Market confidence. Finally, when we look at the markets themselves, we can see they remain confident. The chart below shows the valuation of the S&P 500, as expressed by the cyclical price/earnings ratio, divided by volatility. The combination of high prices and low volatility clearly shows a confident, even complacent, market. It also demonstrates a substantial recovery from the recent pullback. Clearly, markets were briefly shaken earlier in the year but decided on further thought that conditions remained good. While confidence can certainly shift, then, it has been tested and rebounded. With fundamentals even better now, that is likely to remain the case. 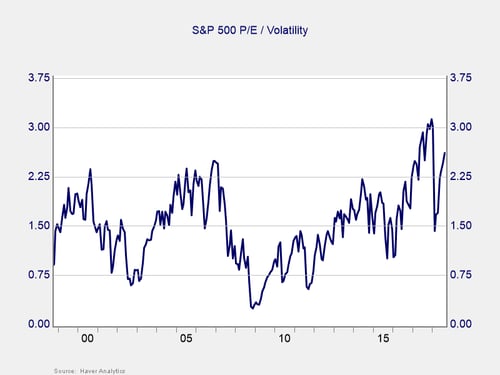 Could politics shake the markets?

It is possible that politics could shake the markets. But as we have seen recently, as long as the fundamentals remain sound, confidence is likely to hold up—and that is just what we have seen since the election. It might actually continue to improve, as it has done in recent months. Should we pay attention to politics? As citizens, yes. As investors, not yet.