Pandemic Not an Issue for Economy (for Now)

With the ongoing improvement in the medical news, this will be the last of the regular coronavirus updates. I had hoped it would also be the end of the need to cover the pandemic as a separate topic. But with the potential rise of the delta variant of COVID and the possibility of new outbreaks, that may not be the case. I will be providing updates as needed in the future.

From a medical perspective, the pandemic grinds on. But from an economic perspective, it is over—at least for the moment. Conditions at the national level have continued to improve throughout June, to the point where almost all of the country has reopened. Vaccination programs are still underway, and case growth and hospitalizations have declined to pandemic lows. The virus is clearly under control throughout most of the country.

As the month ends, though, vaccination rates and the rate of improvement in case growth and hospitalizations are slowing, even as concerns about new outbreaks driven by the delta variant are increasing. Conditions at the national level remain very positive. But risks at the local and regional level, especially in areas with low vaccination rates, are on the rise again, and the risk of local outbreaks remains material. Even if we do see local outbreaks, the chance of another national wave remains low, as much of the country has sufficient levels of immunity to contain such a wave.

With the economy largely reopened, the economic news continues to improve. After a scare as job growth dropped, it then rebounded in May. Other job data remained positive, including record numbers of job openings. Consumer confidence and spending continued to be strong, as did business confidence and investment. The only real problems noted so far are those of success, as the economy struggles to adapt to quicker growth.

Overall, for both medical and economic risks, we remain at the most positive point since the start of the pandemic, and the trends are for even more improvement. Markets are clearly on board with the news, as they remain close to all-time highs. And with corporate earnings blowing away expectations, there may well be more upside ahead. Let’s take a look at the details.

New cases per day. The most obvious metric for tracking the virus is daily new cases. Case growth has continued its steady decline in the past month and is now back to levels from the very beginning. At this point, another national infection wave looks unlikely, and the risks are dropping by the day. In the past week, however, case growth has stabilized, and further improvement is not guaranteed. This may well be due to the spread of the more contagious delta variant and raises the risks of stabilization or even worsening of the trend.

What is different with this update, however, is that the decline has slowed. While four-week declines are still substantial, they are less than they were with the last update. And the most recent data shows stabilization rather than improvement. The one-week case numbers, for example, went from 13,725 a week ago to 13,365 on June 24. That slowdown and near stabilization suggest that further improvement could be in question. 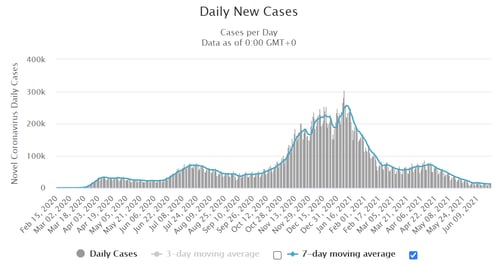 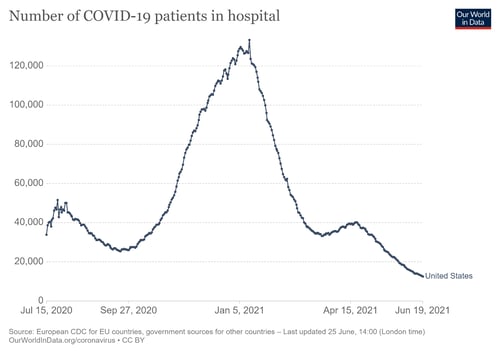 Testing news. The testing news is also stabilizing. Overall testing numbers have continued to decline, which is reasonable given the sharp decline in the number of cases. But the positive test rate has now stabilized at around 2 percent. This is a very low level, close to the lowest level of the pandemic, and suggests the virus remains contained. The stabilization, however, suggests that within that containment, the virus continues to spread at a steady rate. 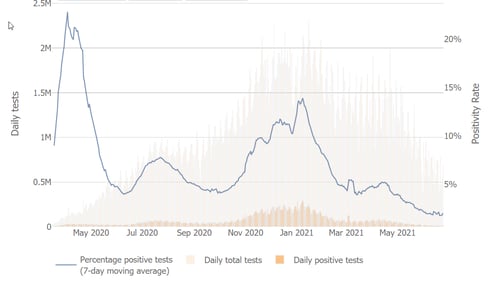 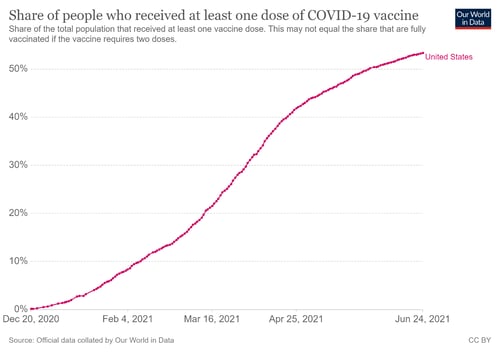 That said, we do seem to have hit containment levels nationally, and herd immunity in many states is now within reach. We can live with the current level of infection growth, from an economic perspective. Looking forward, increases in infections are possible with new variants. But national infection growth is likely to stay low enough that the country can stay open, and the economic effects will be limited.

The economic data continues to get better overall. May job growth reversed a slump in April, while layoffs continued to edge down and job openings to grow. Consumer and business confidence remain high, and spending and investment are healthy. Overall, the economy has now reopened, and growth continues. Many of the problems we do observe are those of success, which are the kinds of problems we want to have. And, as employment continues to increase and supply chains to heal, we are very likely through the worst of the economic impact of the pandemic.

Markets saw more new all-time highs in the past month, supported by the good news on the medical and economic fronts, as well as much better-than-expected corporate earnings reports. Since then, the stock market has bounced around, looking for the next set of good news, but it remains near those highs. With both vaccinations and growth continuing, there is likely support for current valuations and potentially more upside ahead.

A Return to Normal

Conditions continued to improve in June, with medical risks receding and the economy moving forward. The concerns now are much more economic than medical. Medical risks might rise again, but even the economic risks are very moderate by recent standards at this point.

Markets continue to do well and may have more upside ahead. Future gains will depend on further improvement, which while likely is not guaranteed, especially in the short term. Expect more volatility.

In the longer term, the major risks are now specific rather than systemic. We may see localized outbreaks but likely not national ones. We may see glitches in some markets (labor or supply chains), but, in general, conditions are improving. This shift is good news, as it means the difference between specific problems and a general shutdown, whether medical or economic. Right now, the good news is that the specific problems we see now—and are likely to see—will be solved. The better news is that as more of those specific problems get solved, the less risk—and the sooner we get back to normal. We are in a much better place than we were only a couple of months ago. While there are still very real risks, at a national level, we can now see normal ahead of us.