Outlook for October and the Fourth Quarter 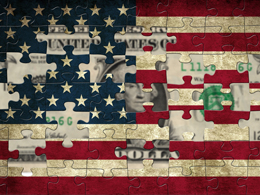 Yesterday, I laid out some of the big-picture constraints I see impacting the economy and the markets over the next year or two. Today, let’s take a look at what we can reasonably expect over the next month and for the rest of the year.

There are really three factors we need to keep an eye on, one political and two economic.

The election. The political one is, of course, the election. From an economic point of view, its effect is likely to be negative. In the face of significant policy uncertainty, businesses are likely to defer investment, hiring, and pretty much every major decision until after the election. This makes sense, given the wide policy differences between the candidates. Meanwhile, consumers, though confident, are not acting on that confidence in any significant way, as spending growth has dropped.

We can therefore expect growth to remain at low levels—possibly above recent quarters but still not great—through the end of the year.

The Fed’s decision on interest rates. The political factor leads us right into the first economic factor. Based on the most recent communications from the Federal Reserve, its members seem largely confident that economic growth and employment have reached a tipping point that justifies higher rates. So far, at least, that message has not pulled markets down, but as we saw last month, a combination of potentially higher rates and slower growth can lead to volatility. If growth does remain slow as the December meeting approaches, we may be poised for a repeat of early September.

In October itself, however, the Fed should recede from the forefront; it’s generally expected that the November meeting is off the table for a rate increase due to the election. Expect monetary policy to continue as a support for financial markets through October.

Corporate earnings. The second economic factor, corporate earnings, will increasingly come to the forefront. Once again, expectations that earnings would finally start to increase look likely to be dashed. Since June 30, the expected growth rate for the third quarter has dropped from 0.3 percent to –2.1 percent, with all 10 sectors revised down, according to FactSet. Although companies are likely to beat expectations, both prospective and actual earnings are unlikely to match earlier growth expectations.

We need two things to improve this: faster consumer spending growth and more business investment, neither of which is likely to materialize prior to the election. We can therefore expect earnings to continue to weigh on the market.

October: more of the same?

Beyond the U.S., there are other issues to watch, of course. A potential crisis in the European banking system has been brewing as concerns about Deutsche Bank, one of the largest in the world, increase. This has potential to become a market-moving situation in October, and I’ll write more about it next week.

Overall, October has a bad reputation, but it hasn’t been as bad as September historically. The next month should be more of the same, with the economy taking two steps forward and one back while markets oscillate between hope for economic growth and fear of a rate hike. Expect continued slow growth and range-bound markets.

The battle between policy and fundamentals should really heat up in November and December, after the election. Once we see who wins—and what the new president means to do and is able to do—we'll be in a much better position to make forecasts.

One thing I do feel confident of is that there will be a great deal of fuss and noise in the last part of the year. And, as usual, most of it will actually mean little to nothing in the long term. As you read the news and follow the markets in the fourth quarter, keep that in mind.