No Sign of Second Wave of Infections at National Level

The news this past week is that there is still no sign of a national second wave of infections. The spread rate remains low, dipping under 1 percent for the first time on two days, and case growth continues to be constrained at around 20,000 per day. That being said, several states are undergoing local second waves, with case counts rising rapidly. So far, those increases have been offset by improvement elsewhere in the country. As such, these outbreaks, while severe at the local level, are not translating to a national level. This development will be something to watch moving forward, as either a further increase in case counts in the affected states or a slowdown in improvement in the other states could reverse the trend.

The other outstanding question, whether the recent wave of public protests will generate a wave of infections, is also something to watch. We won’t know the answer for another couple of weeks, and this possibility is something we must keep an eye on through June.

In some good news, the reopening is still on track as consumers move back into the economy. Last week's jobs report was a major positive surprise. It suggested that employment, while still very weak, is much better than had been thought. Mobility and restaurant demand have continued their substantial improvement, and auto sales have bounced back strongly. Consumer and business confidence also appear to have bottomed and started to recover.

After a slowdown in testing growth, as well as questions about the underlying data, the news here was also better last week. Testing moved back up and the rate of positive tests stayed low, suggesting that the data continues to trend favorably.

Overall, from a medical perspective, conditions continue to remain positive, although they are deteriorating in some states and risks are rising. From an economic perspective, the news is good, as the reopening is proceeding smoothly. Let’s take a look at the details.

Growth rate. Over the past week, the growth rate has held between 0.9 percent and 1.3 percent per day, with most in the 0.9–1 percent range, down from last week’s 1.1–1.2 percent range. At this rate, the curve has been flattened even further, and the virus remains under control at the national level. If that growth rate holds, the number of cases will double about every 10 weeks. The risks have risen in the past week, as second waves have surfaced in several states. But overall, the virus remains under control.

Daily testing rate. After a drop, testing rates recovered in past days and look to be increasing steadily. We have seen slowdowns like those of last week before, and the recovery suggests this rate should continue to improve in the coming weeks.

New cases per day. Despite the state-level outbreaks, the number of new cases per day has stayed at around 20,000. This number is, again, somewhat better than it looks. With the reopening and state outbreaks, other things being equal, we would expect reported cases to increase—which has not happened. Stabilization, in this context, continues to be positive overall.

Total active cases. Active case growth has remained stable over the past week and may actually have reached a peak, as case resolutions now exceed new infections on many days. This improvement is another sign that we have successfully flattened the curve.

Overall, the pandemic continues to be largely under control, with no signs yet of a major national second wave of infections despite local outbreaks. This possibility remains something we need to watch for, especially given the risks imposed by the protests. Still, given the reopening, the news on the pandemic front remains positive.

Jobs market. While layoffs continue, the damage has peaked and continues to recede. Weekly initial unemployment claims continue to decline from the peak, suggesting that much of the damage has already been done.

Continuing unemployment claims have also peaked and remain well below the recent high, despite the continuing layoffs, suggesting many people are starting to move back to work. Also supporting this idea was the most recent employment report, which showed 2.5 million jobs created on a net basis in May, above the 7.5 million losses expected. As this report represents actual payrolls, it is a solid indicator that the job market is now improving. While there are some questions about the details of the data, the direction—improvement—has been well established.

Consumers on the move. Apple mobility data has continued to trend higher and is now well above the pre-pandemic levels of January. This jump is a significant improvement, suggesting people are coming out of their homes at an increasing rate. 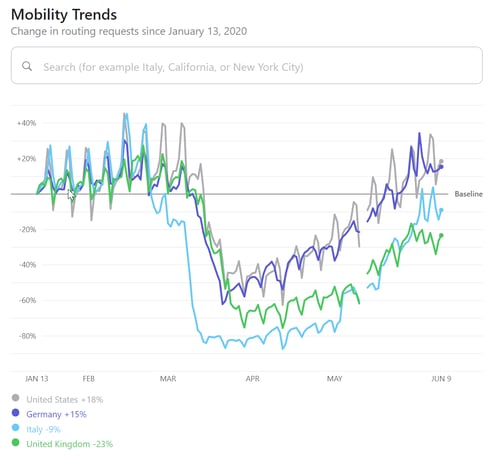 We also see this improvement in one of the hardest hit areas of the economy, restaurants, which have started to come back in many areas. There is still a long way to go, but the process has started. Consumers are also buying autos again, with a significant bounce in sales last month. 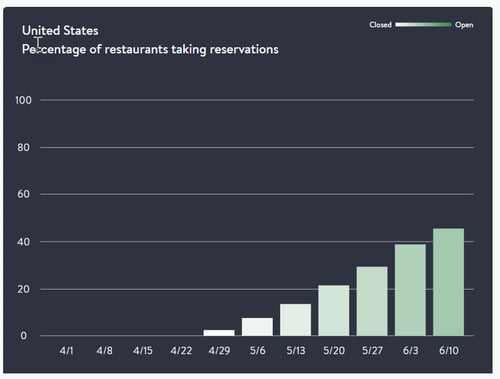 The risks. Although the reopening is going better than expected and is clearly having some positive economic effects, we certainly face risks. The biggest of these is a second large wave of infections. We may be seeing that at the local level in some states but have not seen that yet at a national level, which remains a positive sign. That said, the recent protests and local outbreaks have significantly increased the risks of a national second wave.

Another potential risk is that, even with the reopening, consumers will be slow to return and spending growth will not return to what was normal any time soon. This outcome seems possible, although the early signs remain positive, as restaurants continue to come back faster than expected (as shown above). Another positive sign is that auto sales have rebounded significantly. While risk of a slow spending recovery still exists, the data so far shows that spending is coming back at a substantial pace.

For the financial markets, now that the reopening is underway and there are signs a second wave may be starting, markets have been reassessing the risks, and we have seen some volatility. While that risk remains, the good news is that as we get that data, markets will have a much firmer foundation. The past two weeks’ data has been positive on the whole, and markets have responded—a trend that will likely continue if the news remains positive.

Not out of the woods yet

The real takeaway from this past week is that, despite rising risks, progress continues, to the point that a continued successful reopening over the next several weeks looks likely unless something significant changes. While we are not yet out of the woods, and there are certainly significant risks going forward—with a national second wave of infections from the protests being the most significant—the thing to keep in mind is that many of the biggest risks are moving behind us.