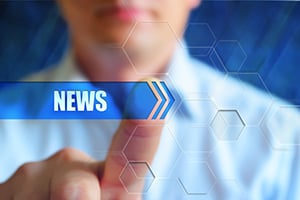 Two Fridays ago, the S&P 500 hit its closing record. About two weeks ago, the Dow cracked 29,000 for the first time. At the time, the headlines were all about how high the markets could go—and how quickly. But after the past couple of days, with the markets experiencing renewed volatility, we’ve started hearing much less about the new stock market records. Instead, the headlines are all about the risks, which certainly include the coronavirus, but also the impeachment trial and Brexit.

In fact, however, both indices are down less than 3 percent from recent highs, and they are still up by double digits over the past year. Nonetheless, we find ourselves talking about the downside risk, rather than records—even when nothing has really changed, except the headlines.

Worries are a bad way to invest

In my standard client talk, I point out that worries are a bad way to invest. In the past decade, the market has panicked over a strong dollar, and a cheap dollar. Over peak oil, and cheap oil. Over the Chinese rise, and the Chinese fall. In the past several months, we have seen the market panic over war with North Korea, war with Iran, the impeachment, the trade war, Brexit, and many other things. But none of these events has had any sustained impact. Despite the worries, the market has continued to climb. And with the economy continuing to grow? That lack of effect remains the likely outcome of the current set of worries.

There is a good chance we will see more records this year—despite the current crop of worries and headlines. The U.S.-China trade war has been resolved for the moment, the impeachment looks likely to soon end in an acquittal, and the coronavirus is likely to follow the path of SARS and be beaten in the next couple of months. Given all this, later this year we could be in the lowest perceived risk environment in years. That environment has to be good for the market—right?

If it bleeds, it leads

The problem is that even if that scenario hold true, I don’t believe it is what the headlines will say. Instead, there will be new things to worry about. We can already see them coming. There's a trade war with Europe! The Brexit trade negotiations with the European Union have begun! China’s economy has been damaged by the virus and is about to collapse! The presidential election is coming! The Democrats might win! The Republicans might win! And so forth.

Data versus the headlines

That is why we will keep looking at the actual economic data and market data and update that every month here on the blog. If the headline risks do play out, we will see the effects in that data—and take action when something actually happens.

Will we see new records? At some point, yes. But the headlines won’t start talking about them until they start happening. Until then, keep watching the scary headlines—but pay attention to the data that matters.