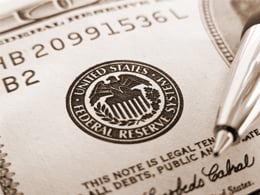 My dad is a pretty level-headed guy, not prone to panic or take things too seriously, so when he forwards me an article asking whether it’s plausible, I take a look.

As I mentioned yesterday, when we compare the actual data with what the doomsayers predicted several years ago, they were just plain wrong. Nonetheless, they continue to try to sell their products by scaring people.

The article my dad just passed along—which suggests that the Federal Reserve is actually bankrupt—is a good example of this type of scaremongering. Posted on a site called Money Morning, it takes some facts, adds some possibilities, mixes in a good dose of “coulds” and “maybes,” and comes up with a set of implications designed to frighten people into buying whatever the doomsayers are selling.

The article, titled “Senator and CIA Insider Accuse Federal Reserve of Covering Up Secret Bankruptcy,” relies on standard rhetorical tricks. You have the appeals to authority—it invokes the Senate, the CIA, and unnamed officials at the Federal Reserve—as well as scary-sounding yet unspecified outcomes hedged by ifs and maybes.

According to the article, Senator Rand Paul and author Jim Rickards “believe the world's most powerful central bank is secretly bankrupt and Fed Chairwoman Janet Yellen will do whatever it takes to keep the public in the dark about this startling situation. If they're correct, every American should fear the unavoidable endgame their evidence is predicting.”

What endgame? And how do we get there?

The article alludes ominously to “an event more severe than the 1930s,” without providing any details. An economic catastrophe? Skyrocketing unemployment? A housing collapse? A stock market meltdown? We covered the first three situations yesterday and determined that there’s no reason for alarm. While the last one is, unfortunately, a possibility, a market collapse doesn’t necessarily equate to a depression if the underlying economy is healthy. (See 1987.)

The substance of the article’s accusations is equally questionable. First, it alleges that the Federal Reserve is overleveraged and insolvent, and second, that the Fed can and will keep printing money.

These points are, to say the least, inconsistent—how can you be insolvent and also keep printing money? The point about the Fed’s leverage may be correct, but the implied blowup doesn’t follow. How would this happen, especially since the Fed is now pulling back? If the dollar was weakening (yesterday, we noted that it isn’t), wouldn’t we see that? Wouldn’t inflation be higher than its current very low levels?

The data simply doesn’t back up the accusations.

Even if the article’s most extreme predictions come true—with the U.S. facing a fate akin to that of the British Empire after World War II, or a Roman Empire-like collapse—what would happen? The UK is still here, though no longer the world power it once was, and the Roman Empire took hundreds of years to crumble. I don’t believe we’re in a similar position, but even if we are, it’s not that bad.

Certainly, responsible people can have a difference of opinion, and I might even agree with some of the article’s warnings about the stock market. At the same time, it’s important to consider how people’s predictions have worked out in the past.

According to Wikipedia, for example, Rickards stated in 2012 that the U.S. has been in a depression since 2007, backing up his assertion with the prolonged high rate of unemployment. Based on current data, that argument is passing, if not already past.

We have real things to worry about, and real problems to solve, but we’re in much better shape than we were five years ago. We didn’t collapse then, due in no small part to the Federal Reserve’s actions, which the doomsayers denounced at the time and continue to denounce now.