End of the World Update: Housing, the Dollar, and More

Over the past couple of years, various predictions of doom have been making the rounds.

The dollar, if you remember, was going to collapse. Ditto the housing market. The U.S. economy was going to go into cardiac arrest as it overdosed on Fed stimulus. Employment was never going to come back. I could go on, but you get the idea.

So, how accurate have these scary predictions been? As it turns out, we didn’t have much to worry about.

As you can see in the chart below, the dollar is at about the same level it was 10 years ago. Yes, there have been bounces, with investors moving away from the dollar in good times and back to it in bad. Overall, though, the currency is holding its own. 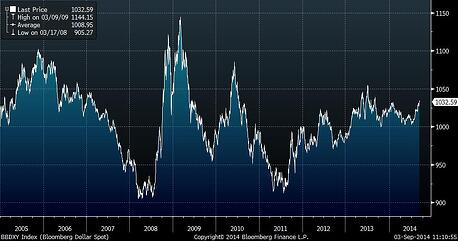 Recently, the dollar has been strengthening as the Federal Reserve approaches the end of its stimulus program—at the same time that the central banks of Japan and now Europe have started or gotten closer to stimulating their economies. Geopolitical conflict in the Middle East and Ukraine has also boosted the dollar. And, over the long term, the improving U.S. trade balance should further strengthen it.

The prediction of the dollar’s ruin deserves an F—and there’s no reason that should change in the future.

The housing market: far from collapse

As the doomsayers had it, home prices were going to continue to crater, and sales would do the same. Underwater buyers were going to abandon their homes, damaging the values of other properties, in an inevitable downward spiral.

In fact, per the following chart, prices have increased substantially, as have sales of existing homes. Prices are close to previous highs, while sales remain lower. Considering the unsustainable demand of the previous bubble, this makes sense. 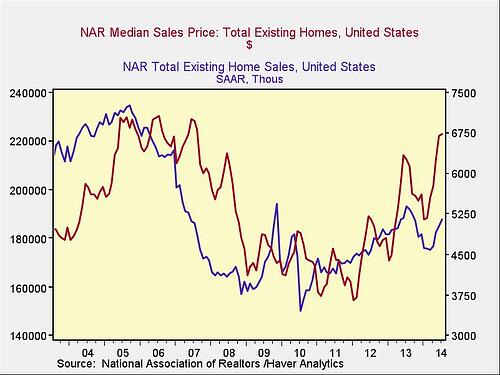 With rising prices and market activity, underwater owners have actually surfaced in many cases as property values recovered. Even for those who remain underwater, rising values have provided a reason to keep paying, while rising rents have made abandoning their homes less attractive financially.

Consequently, foreclosures and mortgage delinquencies have dropped down to precrisis levels—that is, back to normal. 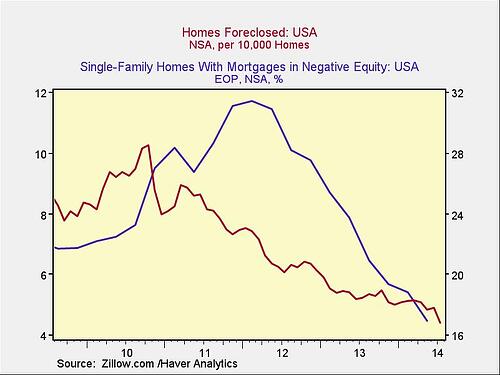 Again, based on the data, predictions of the housing market’s collapse get an F. It simply hasn’t happened, and improving trends suggest it won’t.

The economy and employment: continuing to improve

As for the dire predictions about the economy and employment, chalk up two more F’s.

U.S. economic growth has increased, even as the Fed has wound down its stimulus program, and will very likely continue to do so. Meanwhile, employment continues to gain, in a similar mix to levels of the mid-2000s and at similar growth rates.

In short, nothing to get worked up over

The same people who are predicting doom today have been doing so for the past several years. So far, they’ve been flat wrong, and the trends suggest they will continue to be.

We certainly face challenges, and there are problems that need to be solved. But jumping from there to the end of the world is simply unjustified.