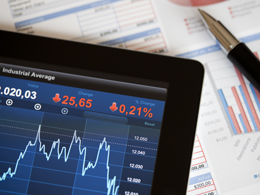 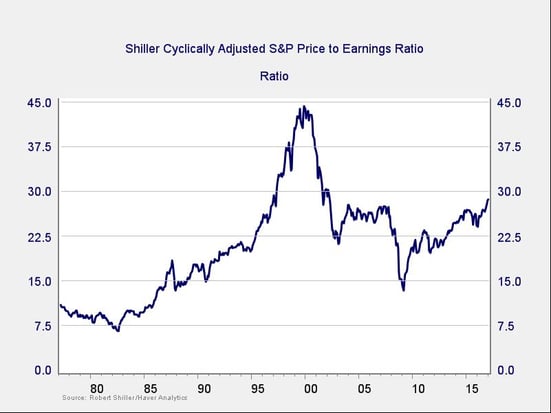 Two things jump out from this chart. First, after a pullback at the start of 2016, valuations have again risen above levels of 2007–2008 and 2015, where previous drawdowns started. Second, even at the bottom of the recent pullback, valuations were still at levels above any point since the crisis and well above levels before the late 1990s.

Although now at their highest level since 2000, valuations remain below the 2000 peak, so you might argue that this metric is not suggesting immediate risk. Of course, that assumes we might head back to 2000 bubble conditions—not exactly reassuring.  Risk levels remain high, although not immediate. 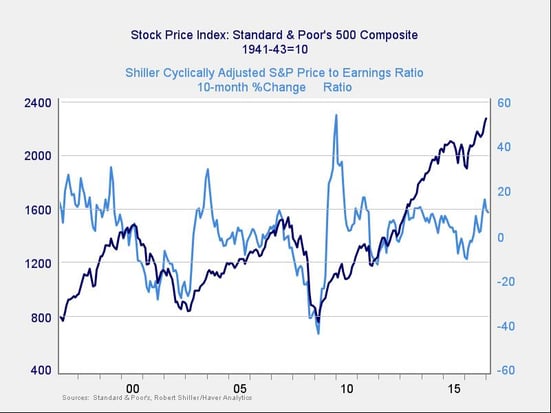 Here, you can see that when valuations roll over, with the change dropping below zero over a 10-month or 200-day period, the market itself typically drops shortly thereafter. Although we were getting close to a worry point, the recent post-election rally has moved us well out of the trouble zone and into positive territory. Although the risks may not be immediate, this metric will bear watching. 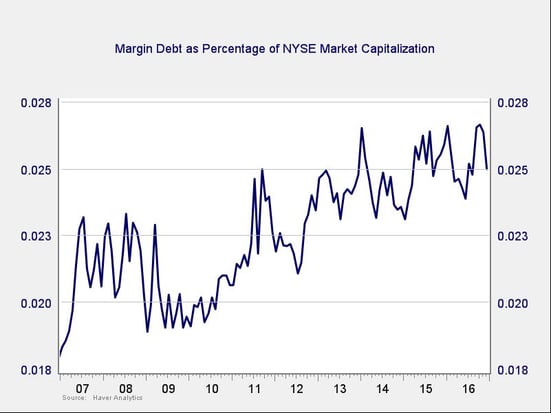 After climbing for a while, margin debt as a percentage of market capitalization has dropped back in the past couple of months to a level typical of the past two years. This suggests a return to a recent normal, lowering the immediate risk. It's worth noting, though, that the average level of the past couple of years is still well above that of 2007–2008. Although the immediate risk looks low, overall risks remain high by historical standards. This metric bears watching, particularly in the medium term. 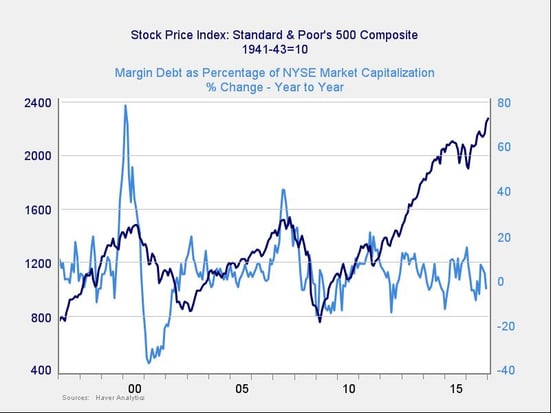 As with the previous metric, the absolute risk level remains high, but the immediate risk has recently dropped, as the change in debt indicator is flat on the year. Overall, this metric suggests that immediate risk has actually declined. 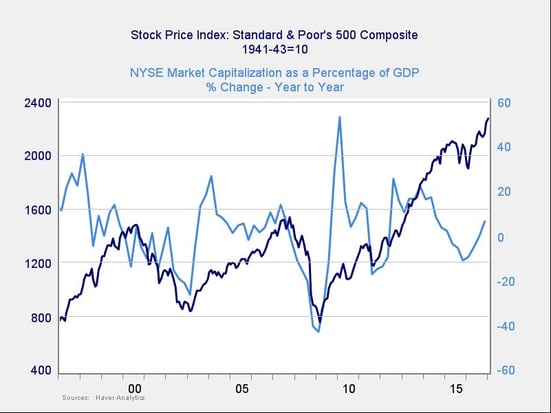 On an absolute basis, the Buffett indicator has been encouraging; although it remains high, it had pulled back to less extreme levels. In recent months, however, with the post-election rally, the indicator has started to move back toward the danger zone. Although we remain some distance from trouble, the recent uptick suggests risks are rising, so this metric will bear watching.

Technical metrics are also reasonably encouraging, with all three major U.S. indices well above their 200-day trend lines and close to new highs. With improving sentiment across the board (consumers, business, and investors) and rising earnings, it’s quite possible that the advance will continue. Given favorable conditions—particularly with the Dow’s recent break above 20,000—a mix of improving fundamentals and positive sentiment could continue to propel the market higher, despite the high valuation risk level.