Market risks come in three flavors: recession risk, economic shock risk, and risks within the market itself. Let’s take a closer look at all three to assess what the risk levels look like this month.

Recessions are strongly associated with market drawdowns. In fact, 8 of 10 bear markets have occurred during recessions. As discussed in last week’s economic risk factor update, the conditions that historically have signaled a potential recession are not in place right now. As such, economic factors remain at a green light.

The price of oil. Oil prices typically cause disruption when they spike. This is a warning sign of both a recession and a bear market. 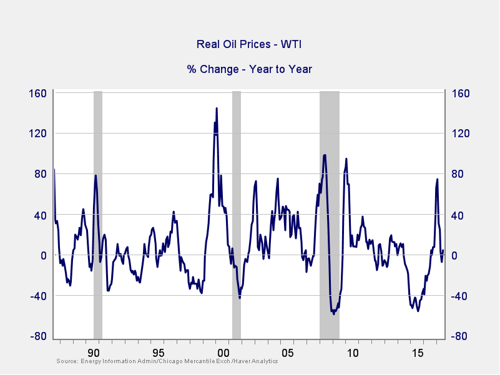 After getting close to a risk level, you can see from the chart above that prices have decreased recently due to higher-than-expected production from OPEC and growing U.S. production. Plus, they remain at relatively low levels by recent historical standards. With the drop back in the annual change and the low overall level, this indicator is not even close to risk levels. It gets a green light. 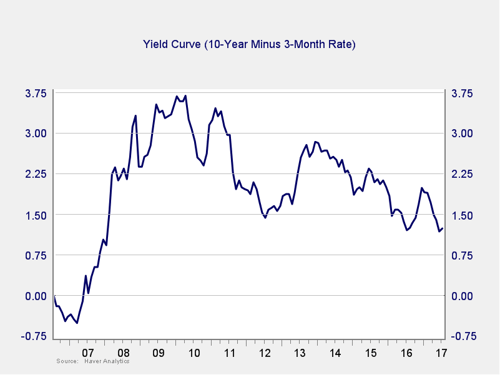 The yield curve spread improved a bit in July, although the spread between short-term and longer-term rates remains low. This was driven by slightly better—but still low—inflation, and it suggests that expectations for future growth remain low.

The spread between the 10-year and 3-month rates remains well outside of the risk zone. But the fact that it is now close to post-crisis lows for the second month in a row suggests that caution is warranted. I am leaving this measure at green for now, but I will be keeping an eye on it. 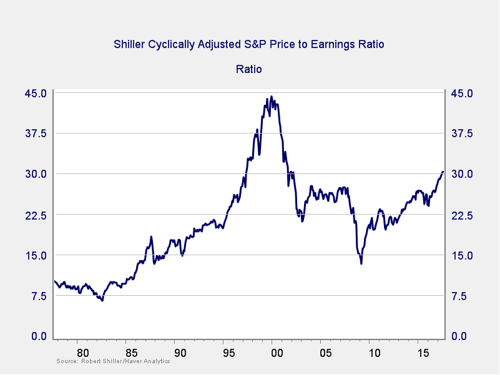 The chart above is interesting for a few reasons. Since the presidential election in November, equity valuations have increased to levels not seen since the early 2000s. In addition, gains this year have pushed valuations even higher, to the third-highest level of all time. In fact, they are below only 1929 and, as you can see from the chart, 1999.

Although the Shiller P/E ratio is a good risk indicator, it’s a terrible timing indicator. One way to remedy that is to look at changes in valuation levels over time instead of at absolute levels. 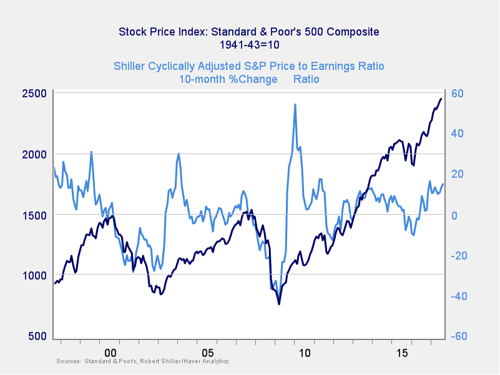 Here, you can see that when valuations roll over, with the change dropping below zero over a 10-month or 200-day period, the market itself typically drops shortly thereafter. Strong stock market performance over the past couple of months has kept changes in valuations at a healthy positive level, well above the trouble zone. Therefore, this indicator shows low immediate risk. 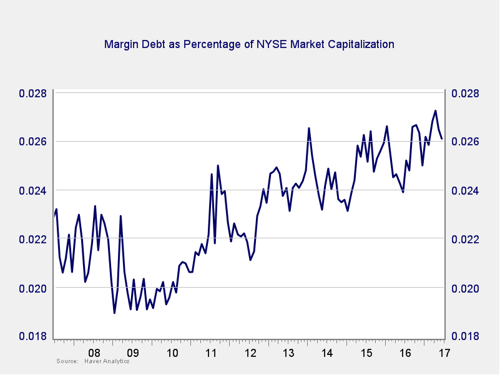 Debt levels as a percentage of market capitalization decreased a bit further from recent all-time highs. While this decrease is encouraging, the overall high levels of debt are concerning; however, as noted above, high risk is not immediate risk. 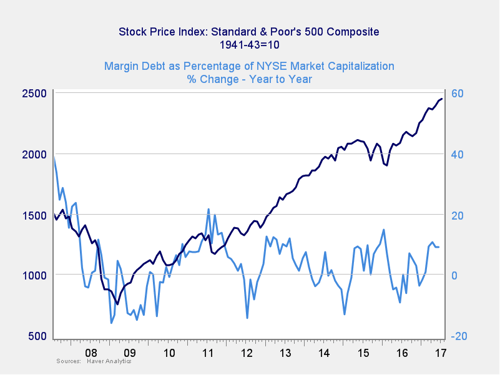 As you can see in the chart above, the change in debt as a percentage of market capitalization also decreased slightly during the month. The overall debt level, however, remains very high, and the growth rate remains at close to risk levels. Given these two factors, the risk level is approaching the immediate level. 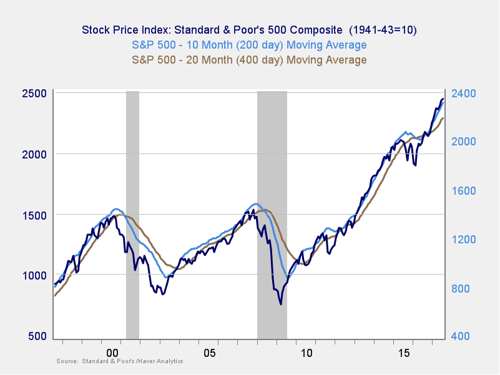 These indicators remain positive, with the S&P 500 well above both trend lines. Even as markets continue to reach new highs, it’s quite possible that the advance will continue given growth in earnings and positive consumer, business, and investor sentiment. A break into new territory could actually propel the market higher, despite the high valuation risk level. With the index well above the trend lines, the likely trend continues to be positive.

The overall economic environment remains supportive, and neither of the likely shock factors is necessarily indicating immediate risk. Similarly, while several of the market indicators point to an elevated level of risk, that risk does not look to be immediate. Overall, while the risk levels have increased moderately, the market environment remains favorable in the near term, and we remain at a green light for this month.