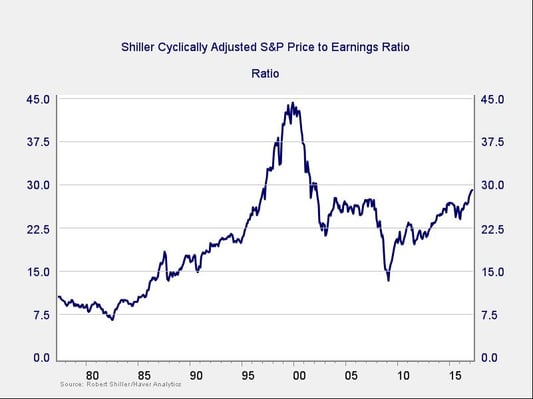 This chart is interesting for a few reasons. Since the election in November, equity valuations have increased to levels not seen since the early 2000s. They’re higher than they were in 2007 and are at the third-highest level in history, after 1929 and 1999. Additionally, volatility in March did little to lower valuations. The market, by this metric and many others, remains very expensive.

Although they’re at their highest level in 15 years, valuations remain below the 1999 peak, so you might argue that this metric is not suggesting immediate risk. Still, comparing where we are now to 2000 bubble conditions isn’t exactly reassuring. 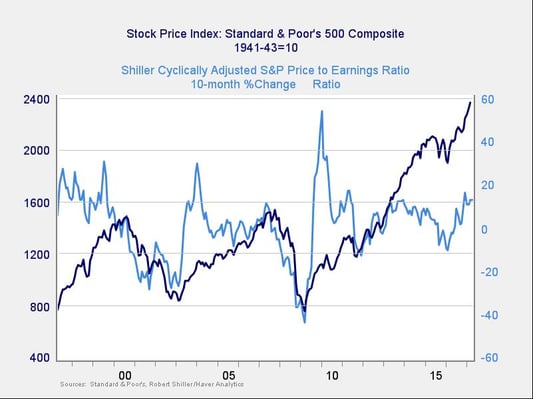 Here, you can see that when valuations roll over, with the change dropping below zero over a 10-month or 200-day period, the market itself typically drops shortly thereafter. The post-election rally has kept changes in valuations at a healthy level, with few signs of immediate risk. 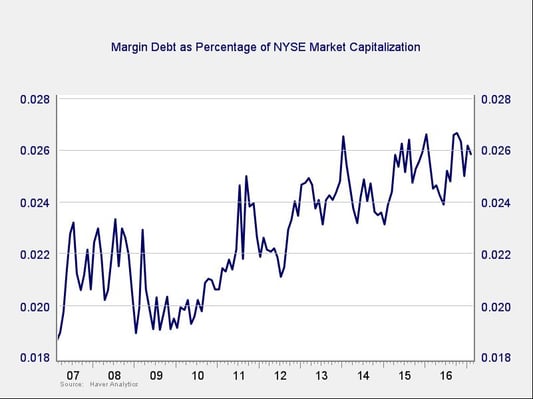 Debt levels as a percentage of market capitalization remain near all-time highs, although growth in this indicator may be slowing. The overall elevated levels of debt are concerning, but given recent improvements, this is not necessarily an immediate risk.

Consistent with this, if we look at the change over time, spikes in debt levels typically precede a drawdown. 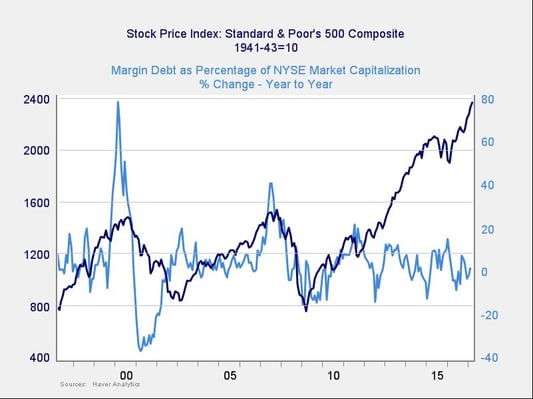 As you can see in the chart above, the change in debt as a percentage of market capitalization remains at low levels. Though the absolute level of margin debt is high, and so is the risk level, the trigger for immediate risk seems to be getting farther away. 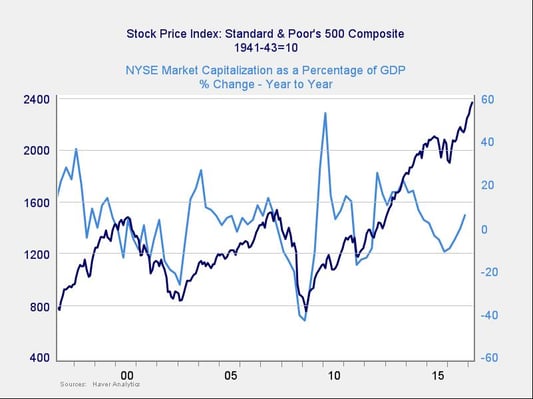 On an absolute basis, the Buffett indicator is actually somewhat encouraging. Although it remains high, the year-on-year change (shown above) is still well below the risk zone. The index has increased post-election, however, and the trend suggests we may be heading into more risky territory, so any increase should be watched.

Technical metrics are also reasonably encouraging, with all three major U.S. indices well above their 200-day trend lines. Even as markets hover near all-time highs, it’s quite possible that the advance will continue given growth in earnings and positive consumer, business, and investor sentiment. A break into new territory could actually propel the market higher, despite the high valuation risk level.

Risk is high (but not immediate)

Although many of the indicators point to an elevated risk level, they do not signal an immediate problem. Given improving economic fundamentals and earnings, and very positive consumer and business sentiment, we may well see the markets—and risk levels—continue to increase.

High risk is not the same as immediate risk, and although there's reason for concern, the indicators that are best at predicting immediate risk are not in the danger zone. The most likely course for the market in the near term is sideways, but it could take a turn upward if good news, such as positive earnings surprises, appears.