Today, I’m launching a new monthly feature on key market risk factors. I’ve written on this topic from time to time, but given recent market conditions and behavior, I think it’s useful to review these factors on a regular basis.

Just as with the economy, there are several factors that matter for the market, in determining both the risk level and the immediacy of that risk. To some extent, I’m still thinking about the most relevant risk factors to include in this analysis. Expect to see some changes in future months, but for the moment, here are five critical factors to watch.

When it comes to assessing valuations, I find longer-term metrics, particularly the cyclically adjusted P/E ratio, which looks at average earnings over the past 10 years, to be the most useful. 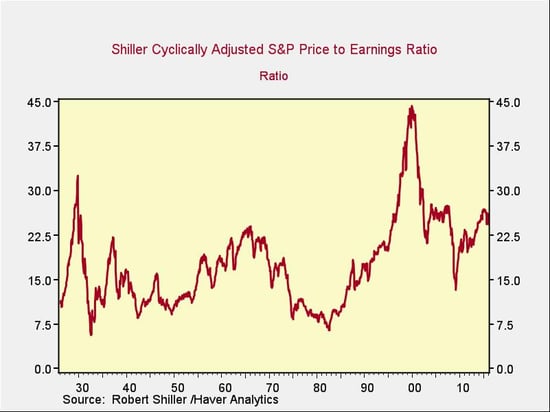 As you can see, valuations are close to the bottom of the range of the past 20 years, which makes them seem fairly reasonable. At the same time, they’re above any of the levels before that, with the exception of 1929.

Another way to use this data is to look at the changes in valuation levels over time as an indicator of trouble ahead. 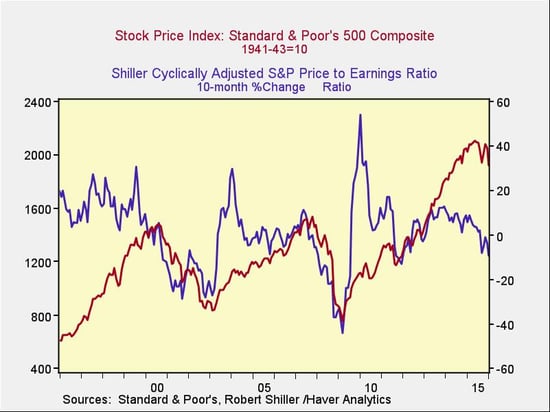 Here, you can see that when valuations roll over, with the change dropping below zero over a 10-month or 200-day period, the market itself typically drops shortly thereafter, as in 2008, 2000, 1995, and 1983. Although we see that kind of decline right now, and it’s clearly an indicator of potential trouble, it’s been present for some time, so the trouble may not be immediate.

Another indicator of potential trouble is margin debt. As a percentage of market capitalization, margin debt is very close to an all-time high, near the level of 2000. We also see that, after a recent decline, debt has moved back up. 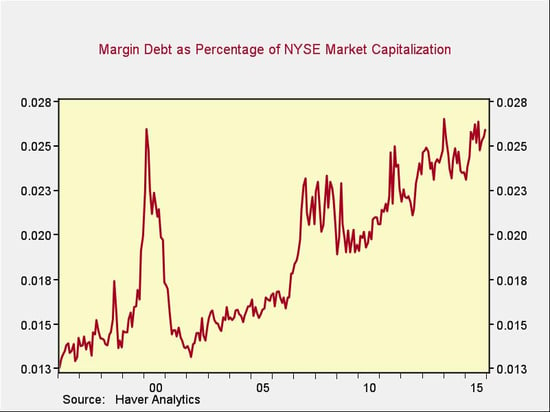 This certainly seems to be an indicator of higher risk levels, but again, the risk isn’t necessarily immediate.

Looking at the change over time, however, even as the absolute risk level remains high, the immediate risk does not. We do not see the kind of spike in debt that occurred just before previous pullbacks—certainly not at the level of 2000 or 2007, and not even to the level of 2011. 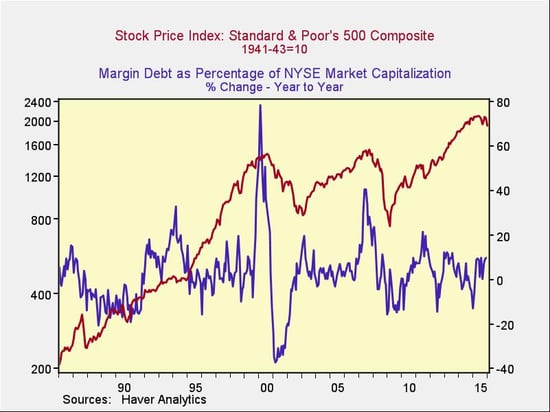 The absolute level, then, is high, and so is the risk level, but the trigger isn’t being pulled just yet. 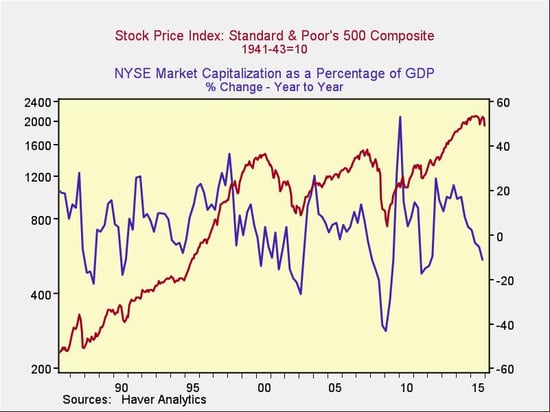 On an absolute basis, this indicator is actually somewhat encouraging. Although it remains high, it has pulled back to less extreme levels. On a change-over-time basis, however, downturns in this indicator have typically led market pullbacks—and once again, we see that here.

Despite a substantial recovery in stock prices, risks are clearly still apparent. Technicals are another worrying factor; although improving, the market remains below its long-term trend lines, which I consider to be the 200- and 400-day averages. Per these indicators, a deeper pullback is very much still in play.

There’s a big difference, however, between high risk and immediate risk—and it is one that is crucial to investing. Not all of the indicators suggest an immediate problem, so we may well have seen the worst of it this time even as the risks remain for the future.

As I said, I will continue to think about which factors to use, with an emphasis on signals that may suggest the risk is more immediate and severe. I’d welcome your suggestions!