Economic Growth and the $15 Minimum Wage 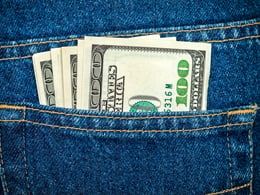 I'm grateful for the many reader questions I've received recently—thank you all very much. Today, we’ll address another one: What does the prospective increase in the minimum wage mean for the economy, and how does that tie into recent slower growth in wages?

This is an excellent question, as it combines several important issues—hiring, wage growth, inequality, and economic growth— into one picture.

A complex mix of costs and benefits

It's simple in theory. According to the rules of supply and demand, if we increase the price of something, the demand will decrease and the supply will increase. In this context, higher wages should both increase the number of people looking to work (the supply) and reduce the numbers of employees that businesses can afford to hire (the demand).

So it would seem obvious that higher wages, especially a higher minimum wage, would reduce the demand for less-skilled workers. When we consider the campaign for a $15 minimum wage, common sense would suggest that the least-skilled workers simply might not be worth that much to companies.

Not so simple in practice. As the saying goes, “In theory, there is no difference between theory and practice. In practice, there is.” From a company's perspective, many jobs are not optional, especially at lower pay levels; they have to be filled, almost regardless of the costs, if the company plans to continue to operate. Someone has to man the cash register or restock the shelves.

Higher wages, then, can happen, but the effect will flow into one of two channels: lower company profits or higher prices. Another layer of complications is introduced when those higher-paid workers spend their newfound cash, to the benefit of the economy as a whole. The net result of the mix of benefits and costs actually isn't all that clear.

There is some empirical research available that sheds light on the actual effects of higher wages.

A study by David Card and Alan B. Krueger looked at the impact on individual firms. The authors took advantage of a natural experiment created in 1992, when New Jersey raised the minimum wage but the neighboring state of Pennsylvania did not, to compare what happened with employment in fast food restaurants. Cutting to the chase, in New Jersey, an increase in the minimum wage actually resulted in increased employment overall, along with higher prices for fast food. That is, the higher costs were passed along to the consumer, but the increase in aggregate purchasing power from the higher incomes of minimum-wage workers more than compensated, in the aggregate, for the costs of higher fast food prices, resulting in more demand and overall increased employment.

There's no guarantee this would work at the systemic level, of course, but the study is suggestive. It is also consistent with observed facts. Higher wage growth is generally considered a good thing; many analysts, including me, have been worried about how sluggish wage growth has been. An increase in wage growth means people have more money to spend, which bolsters economic growth. Despite the negative consequences of lower profits or higher prices, the overall effect is positive.

The problem, then, with a higher minimum wage wouldn't be the increase in wages itself but the government-mandated nature of the change, along with the fact that it would specifically affect the least-skilled segments of the workforce.

Those concerns were addressed by a state and regional study done in New England. Long story short, over six minimum wage hikes from 1995 through 2012, the increases did not seem to hurt employment in sectors where low-paid workers were concentrated, nor in states with higher minimum wages. The evidence suggests that the beneficial effects override the costs—or, at a minimum, that higher minimum wages do not necessarily destroy jobs.

Based on current macro conditions—with consumer spending growth low despite continuing wage income growth—it doesn't seem that a higher minimum wage would hurt either employment or the economy on a fundamental level. Also supporting the potential positive effects of an increase are the decisions by Walmart, Target, and McDonalds to raise wages across the board for the lowest paid. Early indications are that this move has improved service and business quality.