In one of the most encouraging headlines we’ve seen recently, the median U.S. household income rose in 2015 by the most since the mid-1960s. You can see the dramatic increase in the following chart from the White House. 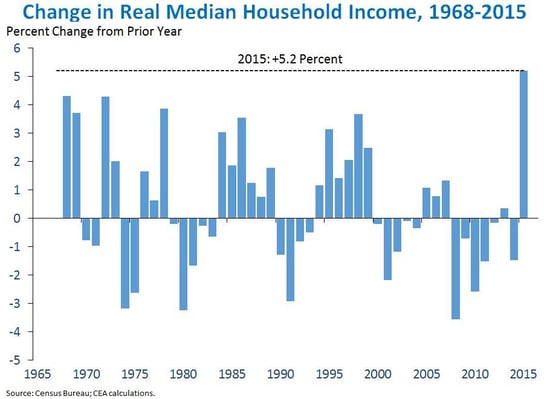 First, it’s important to understand that this is a median figure, not an average. With a median figure, half of the sample is above and half below, so it's not as distorted as an average would be. As such, this stat represents a real improvement in the lives of most of the American population, rather than just strong growth among the more affluent.

The chart below shows that the gains extend across the income spectrum. 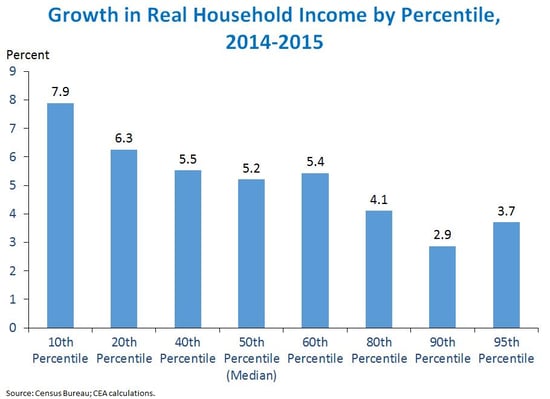 Good news for the economy

The fact that higher incomes are good is pretty self-explanatory at the family level. But in this case, with the benefits widespread, it also means that the U.S. economy as a whole should benefit.

Lower-income consumers spend more of any gains than higher-income ones do; therefore, the economic boost should be greater since the increase has been focused at the lower income levels. Beyond that, it also likely means that consumers, who have carried the recovery thus far, will be able to continue to do so, especially at the lower end of the income spectrum.

Plus, looking back to the first chart, the good income news appears likely to continue for a while. Income growth tends to feed on itself and persist. Looking at the past 50 years, the 1990s saw six years of growth while the 2000s saw three. Going even further back, it seems we should get at least one more year of strong income growth and quite possibly more.

That’s because faster income growth can lead to faster consumer spending growth and higher consumer confidence (both of which we’re seeing), which in turn leads to more hiring and even faster income growth. What makes this particularly interesting right now is the ongoing upward trend in wage growth and the high number of job openings. Although business confidence remains low in surveys, companies keep hiring where they can—and are increasingly having to pay up to do so.

But is it good for the market?

At a company level, the effects of higher incomes are likely to be more mixed.

Higher wages and more hiring can hit company profits unless each worker is more productive, which hasn't been the case in recent years. Indeed, margins are declining for this and other reasons. Lower margins can be offset by higher sales as consumers spend more, but this is a headwind that is likely to worsen.

The other potential issue (and this is far from an immediate problem) is that rises in income often come toward the end of an expansion. Although this probably signals another year or more of increasing incomes, it potentially does mean that we’re moving closer to a recession. That is not really news, of course, and rising incomes should make us better able to stand it when it does come. Still, it’s one more signal that the economic cycle has not been abolished.

All things considered, however, a rise in median income is extremely good news, as well as a good signpost for the future.