Markets in an Interesting Place

As a reminder, this written update will be followed next week by a video update, and then back to a written post on a weekly basis. Thanks as always for reading and watching.

While the big picture has improved from two weeks ago, the rate of improvement has slowed significantly. The good news is that, so far, there are no signs of a resurgence in case growth due to either state reopenings or more contagious variants of the virus. Still, the slower improvement suggests that resurgence remains possible as some of the risk factors may be coming into play under the surface. As of now, it looks like it remains a battle between the speed of vaccinations and the potential negative effects of reopenings and viral variants. Right now, the vaccines are winning, but risks of faster spread will remain for the next month or so.

The economic news is better. Reopening in many states has accelerated, which has helped as jobs were significantly positive in February, and layoffs have come down in recent weeks. Business spending remains strong. The recent passage of more federal stimulus will push the economy to even faster growth. So, while medical risks remain, the economic picture looks positive.

That continues to be what markets are thinking, as they remain close to all-time highs despite some turbulence around rising interest rates. Let’s take a look at the details.

New cases per day. The most obvious metric for tracking the virus is daily new cases. Case growth remains low by recent standards, now at levels last seen in October. But the rate of improvement has slowed significantly after a brief jump. This is consistent with what we saw in previous waves, as infection rates stabilized as states reopened, and it suggests future declines may be limited even as another wave remains a possibility. So far, however, conditions remain reasonably favorable, and the results will depend on how fast vaccinations proceed. 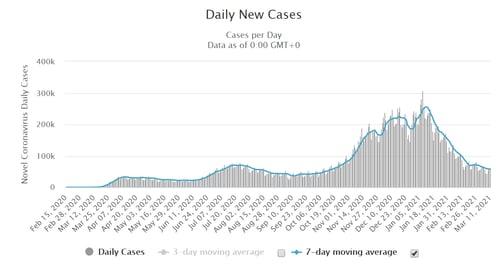 Hospitalizations. We also see the same trend with hospitalizations, although not as pronounced. While case reporting has weaknesses in how the data is reported, hospitalizations are much better as a real-time indicator. Here, too, we can see a moderation in the improvement trend. On March 7, there were 40,212 people hospitalized, down from 47,352 a week earlier. As a coincident indicator and as a better indicator of the stress on the health care system, this supports the idea that the trend is still improving, but at a slower rate. 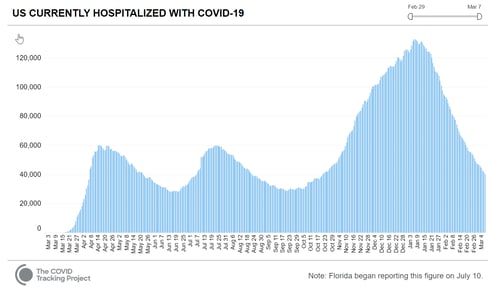 An interesting comment on this data point is that this tracking organization, citing improvements in the pandemic, has essentially shut down as of March 7. I will be looking for additional sources here, but the data suggests that we are past the point of systemic concern for many health care systems. Given the focus on vaccinations for high-risk groups, which disproportionately reduces the health care system demand, this makes sense—and is a very positive development.

Testing news. The testing news is mixed. While the positive rate remains low, we did see a spike as overall testing numbers declined. This could make sense, as less infection growth means fewer people are likely to be tested. But it also means that we have less visibility into the potential spread of the virus, and this is potentially a risk factor. Nonetheless, the continued low level of positive testing rates is supporting evidence that conditions remain positive and could be a leading indicator that the medical risks remain contained. 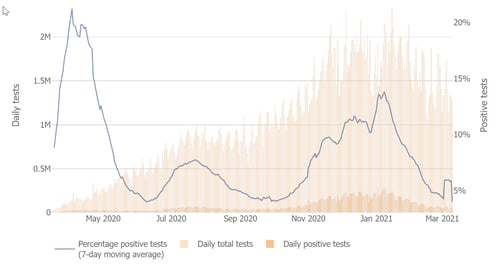 Vaccinations. Finally, the good news is that the vaccination process continues to accelerate. Almost 19 percent of the U.S. population have now had at least the first shot of the vaccine, and almost 10 percent have been fully vaccinated. This has very likely contributed to the continued positive change in trend in the other data series. Vaccination rates have accelerated significantly, and that trend is likely to continue over the next several weeks. As of now, it is very possible that everyone who wants to be could be vaccinated by the summer. 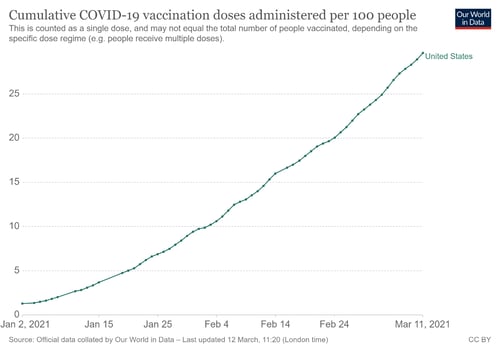 The major risk continues to be that a more contagious strain of the virus could take root and accelerate infections again before vaccinations get sufficient traction. There are no immediate signs of this, and the risk declines as vaccinations advance. But evidence of these strains has now been reported in almost all states, and it could be behind the recent slowdown in improvement. While this is a declining risk, it is still very real.

The bottom line is that while conditions are positive and improving slowly, infection growth is still too high, and the improvements, while real, have slowed significantly in recent days. Policy measures are being loosened around the country, which likely has had an effect, and there is a real risk from more infectious strains of the virus. We need to keep an eye on this. Despite that, vaccine deployment continues to moderate the risks. As that accelerates, the downside risks will drop quickly.

Jobs and consumers. The economic data continues to get better. February job growth came in strong, with 379,000 jobs added, focused in the weakest areas of leisure and hospitality. Further, layoffs have trended down in recent weeks as states have reopened. Better job prospects and improving consumer confidence helped consumer spending as well, as shown in the chart below. The recent passage of more federal stimulus will help keep that trend going, so the data is showing we are likely through the worst of the economic impact of the pandemic and growth may well accelerate further. This is also what the business sector is expecting, as business investment continues to rise and is now above pre-pandemic levels. 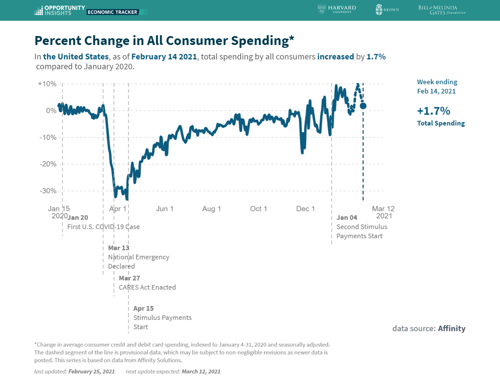 Markets saw some volatility in the past two weeks, largely attributed to increases in interest rates. But this, too, represents progress, as that increase is based on continued economic improvement. Despite that turbulence, between the ongoing medical and economic improvements, markets continue to expect a much better 2021 and that has supported prices. Fourth-quarter earnings came in well ahead of expectations, and analysts are now adjusting their 2021 earnings estimates upwards, which suggests this positive trend might continue as well.

While conditions remain favorable by recent standards, the slowdown in medical improvement suggests that medical risks are still very real. We don’t need to panic about it, but we do need to pay attention. While vaccines will likely solve the problem in the next couple of months, we are not there yet.

Offsetting the medical risks, however, with states reopening and the federal stimulus supporting the most vulnerable parts of the economy, the economic risks look to be largely in the past. We should see continued growth until and past the point the medical risks normalize.

Markets are in an interesting place, as the benefits of the improving medical and economic conditions are increasingly being offset by the likely higher interest rates as a result of those improvements. As higher rates are a headwind for markets, they will likely keep bouncing around on new developments, so expect more volatility in the short term.

In the longer term, the good news is that vaccines are now rolling out increasingly quickly. By the summer, we should be approaching the end of the pandemic when the economy can normalize and start to really grow again. Despite the real risks that still remain and the possibility of a medical setback, we are making progress.