As U.S. markets once again approach new highs—after all the drama and the three separate pullbacks last month—I think it makes sense to try to gain some perspective about what is really going on. Immediately after the markets hit new highs last time around, we had quite a bit of volatility. So, it’s reasonable to wonder what will happen next as we approach these highs once again.

A look back at recent history

The chart below goes back one year. If you remember, markets cratered last September, dropped sharply into December, and then rallied hard this year. True, we have had pullbacks, including a serious one in May and three smaller ones in August. But markets recovered from all of them, remain at very high levels for the year, and look poised to reach new highs. What’s going on? 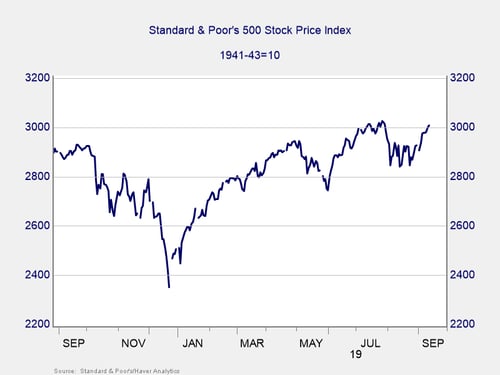 There seem to be two conflicting forces here. First, the underlying strength of the economy continues to support the market. The trend this year has been up as growth has persisted, largely due to consumer spending and despite all the headline risks we see daily. Second, politics has been a generally negative force (those headlines again) and occasionally a major shock, driving markets down.

What we haven’t seen this year? Politics acting as a tailwind to the markets. The trade war has been the dominant story, followed by Brexit. From a market perspective, the news has ranged from terrible (which drives markets down) to not so bad (which lets them come back up). That scenario explains most of the past year.

Right now, the news falls into the not-so-bad category. China is reportedly going to buy more U.S. agricultural goods, and the White House has delayed imposition of some additional tariffs. Similarly, Brexit doesn’t seem to be getting worse. The absence of bad news is allowing markets to move back up—and that movement is likely to continue until the headlines blow up again.

Looking at the future, the real takeaway is that markets continue to move up despite the headlines, which is a positive sign. Although the political risks are very real and can knock markets down, the economics keep trumping them. The new highs, then, are not a fluke. Instead, they are a reflection of the real fundamentals and provide good reason to believe there may be more upside ahead.

That’s not the only reason to believe we could be in for more positive moves. Most of the recent gains took place when the Fed was expected to increase rates. Now, the expectation is that rates will drop, which should provide a policy tailwind that hasn’t been there for most of this year. The European Central Bank, in fact, just took rates down. So, while politics remains a risk, policy is becoming more helpful.

This year, the political news has been bad or not so bad, but never good. Now, it is becoming less bad. But what if the political news actually turned positive? What if China and the U.S. cut a deal? What if Britain and the European Union achieved a peaceful Brexit? What if the Republicans and the Democrats . . .okay, that’s a bit too much! Still, there are real possibilities for future improvement, which could provide further tailwinds.

We can certainly expect more volatility, as the major issue of the trade war is still open. Even if it were resolved, we have the building election campaign to generate angst. The underlying trend, however, remains surprisingly positive and will likely continue as long as the economy continues to do well.

That relationship between the markets and the economy, of course, is why I spend so much time looking at the economy. The economy is the dog, and markets are the tail. If you want to know why the tail is wagging (or why it isn't), watch the dog. And right now, the dog looks fairly content.