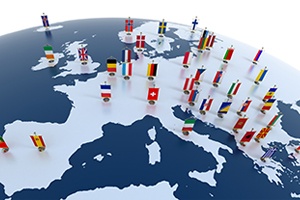 I am in the process of writing my speech for Commonwealth’s National Conference in November. I have decided to focus on really understanding what is going on with the trade war and what that might mean for investing. That understanding, of course, requires a fairly deep dive into both what is happening and where the war started.

As U.S. investors, we (or, at least, I) tend to be fairly parochial. My commentary on the blog, for example, has paid quite a bit of attention to the recent (rather minor) pullback in U.S. markets. You would think, based on the discussions here, that we’re telling the real market’s story. For U.S. investors, of course, it is. This is why I tend to focus on what's happening in U.S. markets. But when you look at the bigger picture, there are more important things happening.

Let’s start with the stock market crash in China. Hadn’t heard about that? You are not alone. But look at the chart below. The Shanghai Composite is down 50 percent from its peak in 2015. Looking at more recent data, it is down almost 30 percent this year. For comparison, here in the U.S., the S&P 500 was down more than 30 percent in 2000 and more than 50 percent in 2008. What China has experienced this year is what we saw in the dot-com bust; what China has experienced since 2015 is what we saw in 2008. 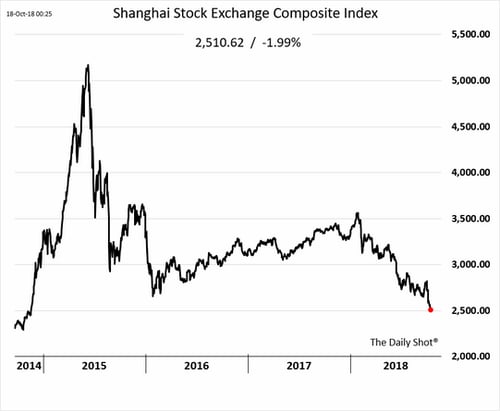 China is either the largest or second-largest economy in the world, depending on how you measure it. When the U.S. has a stock market crash, the world notices immediately. When China has not one but two crashes in the past four years, you might expect some reverberations around the world. But we have not seen that. Why that is the case is an important question, as it speaks to the effects outside China if the trade war gets worse. It is relatively easy to wage a war by dropping bombs on the enemy. But it is much harder if the bombs start landing on your own cities. By understanding the links—or lack thereof—between China and the rest of the world, we can get a better idea of the unintended consequences here in the U.S. and around the world if the war gets worse.

This is a high-profile example, but certainly not the only one, of how the underlying economic structure will provide valuable context for identifying investment risks and opportunities going forward. Right now, for example, I am looking at how different trade alliances are likely to shake out. Will Europe side with the U.S.? Or China? How about Japan? Emerging markets? All of these outcomes will make a big difference to the investment profile of these markets for U.S. investors.

It's not that simple, of course. Geopolitics also has to enter into the equation, along with demographics, capital demand and supply, consumer spending growth, and many other factors. We can’t hope to solve the problem. But we can, hopefully, find a couple of key metrics to watch, just as we do with the U.S. economy and markets.

Things will be different this time

If the trade conflicts worsen, things really will be different this time. We need to understand just how different and what that means not only to us but to our allies and opponents. I expect to be writing quite a bit more about this topic going forward. For right now, I have to finish my speech, which is already overdue. Back to work!