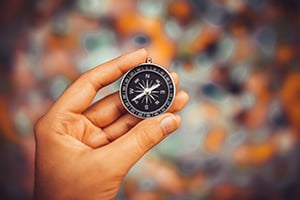 August was another great month for the financial markets. Here in the U.S., the markets continued to hit new highs, with the Dow up by 1.5 percent, the S&P up by more than 3 percent, and the Nasdaq up by more than 4 percent. Abroad, developed markets also did well, going up by 1.76 percent. Emerging markets bounced back significantly at month-end with a gain of 2.65 percent.

Earnings surge. Two factors drove the strong returns. First, earnings continued to come in strong. With essentially all companies reporting, S&P earnings almost doubled over those of the prior year, well above the expected increase. Second, companies continued to sell more and keep more of the sales as profits. From a business perspective, confidence remained high, and the results justified it.

Medical risks rise. Beyond the markets, however, the news was not as good. The Delta variant continued to spread, with the new case growth rate up by more than 90 percent during August. Hospitalizations more than doubled. While the increase was focused on a limited number of areas, other areas showed significant increases.

Impact on consumers. The deterioration in medical conditions did not translate to a similar economic impact. There were no large-scale shutdowns, even in the most affected areas. The economy was left open, and business confidence and investment remained strong. Although conditions overall remained positive, the rising medical risks did affect consumers.

With the medical risks on the rise, supportive federal programs, including supplemental unemployment insurance and eviction and foreclosure moratoria, expired across the country. This raised worker worries and drove consumer confidence down. The drops were significant in the two major surveys of consumer confidence—the Conference Board Consumer Confidence Index and the University of Michigan consumer sentiment survey. The Michigan survey dropped to its lowest level since 2011. This scenario marks a significant change from even a month ago. As the consumer represents more than two-thirds of the economy, things could slow down going forward.

Risks bear watching. Overall, conditions are still positive. The Conference Board Consumer Confidence Index is still at a healthy level, and business confidence and investment remain strong. Nonetheless, August clearly marked an increase in the risk level. While we should not make too much of one or two months of data, we will need to pay attention to what happens with consumer confidence going forward.

Reasons for concern. Looking forward to September, in particular, there are reasons to be concerned. The effects of the expiring federal programs will get worse over the next couple of months, which will likely further hurt consumer confidence. If hiring slows, as the recent ADP employment report shows is possible, that will further depress confidence. Finally, while consumer spending growth has been healthy, lower confidence could hit this indicator as well.

Reasons to believe. On the other hand, the economy still has substantial momentum, and many indicators remain healthy. In particular, business confidence and investment are bright spots, and more workers might return to the labor market, due to increasing economic concerns. On the medical side, there are signs that this wave of the pandemic may be peaking. Case growth started to stabilize at the end of August, and positive testing rates declined. We enter September with some real concerns, but as of now those concerns are not yet realities.

Market outlook. From a market perspective, there are risks around a weaker economy. But these risks will likely keep interest rates low—which will support the markets. So, although the economy faces real concerns, there are significant positives here. While September will face challenges, the outlook remains positive for the markets.

Which Way Is the Wind Blowing?

In summary, the outlook for September is unusually uncertain, as the pandemic and the economy remain in flux. August was the month when the pandemic exploded again and started to slow the economy. September will be the month when we find out if this situation will continue—and we simply have to wait for the data. We will take a look next month to see which way the wind is blowing.