The jobs report (formally the employment report) is always important. In fact, there is no single more important economic fact than how the labor market is doing. This report hits all of the issues: job creation, unemployment, wage growth, and labor demand.

That said, in a normal economy, there may not be much actual news in the report. If everything is more or less in line with expectations, showing steady growth, that is certainly good. But we don’t need to pay attention.

This month, though, we need to pay attention. If you remember, last month we saw job growth come in at 20,000, well below expectations. This number was a shock. Given the other signs of weakness in the economy, it raised the question of whether things were worse than anyone had really thought. That question is hanging over tomorrow’s report.

Will we see a rebound?

As you can see from the chart below, job growth has come in very low twice before in recent years (May 2016 and September 2017), only to rebound significantly the next month. That is the most likely result this month, a significant rebound. We have also seen multiple milder slowdowns, again followed by rebounds. What we will find out tomorrow is whether we get a rebound this time as well. 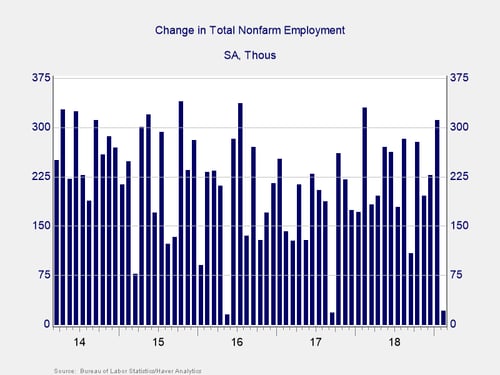 The expectations are solid but not great. Job growth is expected to be 175,000. The unemployment rate should hold steady, and wage growth may pull back a bit. Plus, last month’s number may have been due to terrible weather and may have been partial payback for a very strong January. There are good reasons to expect a rebound. If the numbers come in as anticipated, that would certainly suggest growth continues and that last month’s weak report was an outlier.

Is a weaker report in the cards?

But there are signs that a weaker report may be in the cards. The ADP National Employment Report, a similar but less reliable report, came out yesterday with job growth of 129,000. This figure is the lowest level seen since September 2017 and, again, well below expectations. Job growth at smaller firms, historically an engine of growth, was close to flat. Manufacturing payrolls were actually down. In other words, the most timely data is saying there is a real slowdown—and that will weigh on expectations for tomorrow.

We can therefore reasonably expect job growth to come in below expectations—probably around 150,000. At that number, the labor market remains healthy, and last month is just an outlier.

If, however, job growth comes in much weaker than that, there is the real possibility that job growth is slowing. We have not had two consecutive months under 150,000 since 2017. The annual job growth rate would drop as well, taking the trend negative. Growth would continue, of course. But the change in trend would increase the economic risk of taking job growth down to a recession risk level over the next year or so.

Job growth of around 150,000 is a reasonable expectation. Any excess would be good, but we need to watch for a drop below that level. Given the ADP data, this drop is a real possibility.