Is U.S. Economic Growth Headed for a Slowdown? 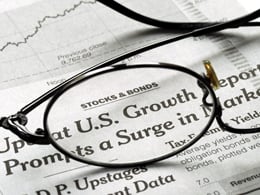 Based on the retail sales data that came out yesterday, it’s time to take a serious look at the prospect that U.S. economic growth is slowing down.

I’m not suggesting that we’re moving back into a recession—just that growth is quite possibly slowing below expectations, and an acceleration may not be coming any time soon. We need to consider why that might be.

First, let’s consider the retail sales number, which dropped 0.3 percent in June, coming in well below the previous month’s very positive figure. In part, this is normal and expected after a strong month, but the magnitude of the drop was worrying, falling far short of expectations; worse, the prior month was revised down as well.

Retail sales are important because they offer a look into consumer thinking—and consumers are more than two-thirds of the economy. Given lower gas prices and wage income growth around 4 percent–5 percent, the expectation was that people would go out and spend. That doesn’t seem to be happening.

Why? There are two plausible reasons: a rise in uncertainty, and a decline in income growth.

As the chart below shows, rising economic uncertainty tends to negatively affect consumer spending, with about a one-year lag. The relationship is not direct, but it is material. 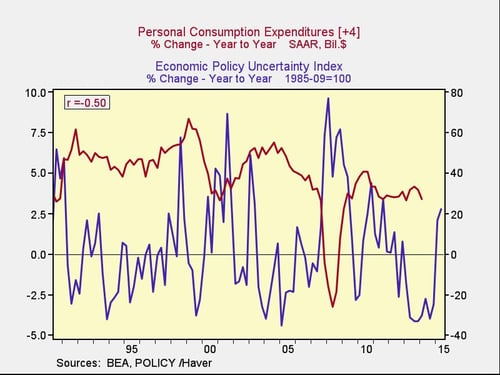 The recent uptick in economic uncertainty—which is based on unexpected changes in policy and conditions, such as the Greek crisis—suggests that consumer spending will slow down, which is just what we’re seeing. The numbers indicate this effect will get worse through the rest of the year.

As you can see in the chart below, wage income had been rising at a healthy pace, but the recent trend is down. At the margin, this has restricted consumer spending growth as well. 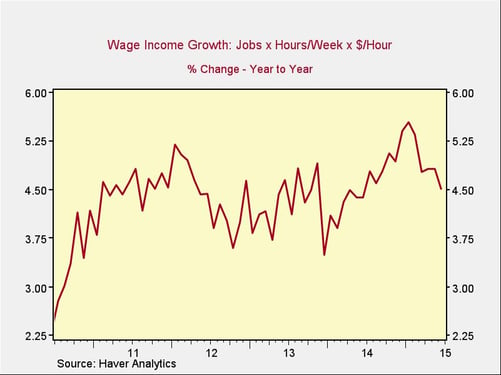 Looking forward, the news for wage income growth isn’t as bad as for uncertainty, but it’s not particularly good either. Jobs should continue to grow, but hours per week are already high and unlikely to increase substantially. What needs to happen here is more wage growth, which we’re not seeing yet.

I’ve been saying for some time that wage growth should increase in the near future, and it still should. But if it doesn’t, we’ll need to revisit our expectations. Continued weakness in both wage growth and spending means that point is getting closer.

Where we are now

Let’s be clear: the recovery continues. Economic growth at around 2 percent–2.5 percent isn’t great, but it can continue at this level for a long time by avoiding overheating. Current growth levels look sustainable, and there’s no internal reason that the recovery should end. In fact, with all the turbulence outside the U.S., the fact that the economy continues to grow is a positive sign.

As far as growth goes, slower for longer isn’t what everyone is expecting, but it looks like an increasingly possible option. This has its pros and cons—slower growth means slower increases in living standards but lowers the possibility of recession, for example—but it’s positive overall.